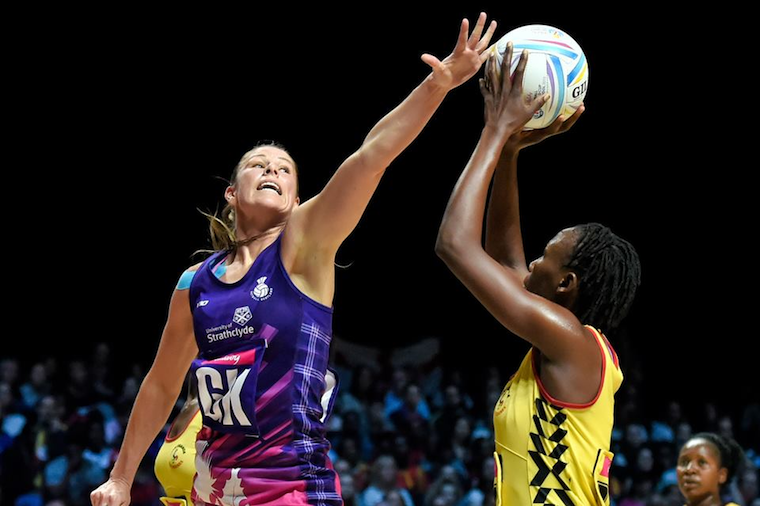 The game between Uganda and Scotland was the tightest so far

The Uganda national netball team, She Cranes today defeated Scotland and proceeded to the next stage of the best 12 teams at the ongoing Netball World Cup in Liverpool, United Kingdom.

The She Cranes scored 52 goals against Scotland's 43. This was Uganda's last game in Group D. The She Cranes beat Samoa Saturday but lost to England on Friday. Though Scotland put up a spirited fight in the third quarter, Uganda kept the lead throughout the game.

The Scottish goal scorer Emma Barrie and Lyndsey Gallagher scored ten points in the third quarter while She Cranes' Stella Oyella as goal attacker and Peace Proscovia as goal scorer scored eight points. Barrie and Gallagher, however, could not outmatch the combination of Oyella and Proscovia

Oyella was named the most outstanding player of the game, after scoring 28 out of the total of 52 points for Uganda and also playing excellently as goal attacker and center. Oyella came in handy with the absence of Mary Nuba in three quarters as goal attacker.

In the post-match interview, Oyella said that she will be changing positions throughout the World Cup so that Uganda proceeds further than the round of 12.

"I'm there to rescue my team," Oyella said.

Oyella has played centre in the previous games against Samoa and England. Assistant coach for Uganda, Nelson Bogere lauded the team for beating Scotland, which is ranked seventh in the world, a place behind Uganda. He also praised Oyella for a great performance as goal attacker.

"Stella is a goal attacker and goal scorer and we have started training her as centre and she is doing well."

However, Oyella was criticized for not pushing hard enough and passing the ball from the centre to Nuba and Proscovia in the game against England last Friday. Oyella has downplayed the criticism and looking forward to the next stage.

Uganda will now proceed to the next stage of the best 12 teams. Uganda's next fixtures are against Trinidad & Tobago on Monday and South Africa on Wednesday.

I am thinking "The Last King Of Scotland"; ha, ha, ha, muna oona, hi ni dada kwa dad tuu! Idi will be smiling in his grave.
Report to administrator