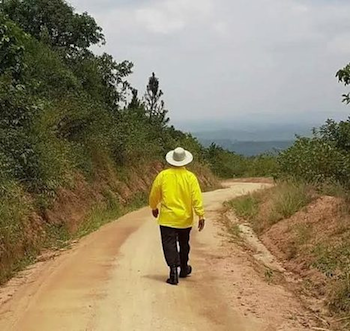 To shine a bright light on the dangers of physical inactivity and the need for exercise, President Museveni and his entire cabinet will demonstrably walk 10 kilometres from Kololo Ceremonial Grounds via Lugogo and back on July 14.

On the same day, several sports; volleyball, football, netball and basketball will be played and the general public will be screened for non-communicable diseases like cancer, high blood pressure, diabetes and heart disease.

The walk and other activities will be in commemoration of the ministry of Health organised Uganda’s second National Physical Activity Day. The day is meant to highlight the importance of physical activity as a much-needed intervention to prevent and control Non-Communicable Diseases (NCDs).

To Aceng, physical inactivity is the fourth leading worldwide cause of death. It’s estimated that one in four adults globally is physically active enough. World Health Organisation recommends at least 150 minutes of moderate intensity or 75 minutes of vigorous intensity physical activity per week or 30 minutes of moderate activity daily among adults while children and adults require a minimum of one hour per day of physical activity, Aceng further explained.

She said cases of physical inactivity are more on the rise in rural than urban areas, more in adults than in younger groups and more in female than in male counterparts.

According to Aceng, urbanisation is one of the factors that have led to physical inactivity among our population. This is due to use of motorised transport such as boda bodas and cars, use of computers, remote control for electronic gadgets and excessive television watching.

In addition, Aceng said that working settings that require long sitting hours like offices, markets and shops also result in inactivity and bone, joint and back problems.

“However, Ugandans should create a favourable environment for regular exercises including mandatory physical education in schools, eating healthy foods available and reduction in sugars and salts in foods and beverages etc...”

The National Day of Physical Activity (NDPA) was launched by the government and will be held every second Sunday of July as a way of controlling the increased cases of non-communicable diseases.      

We have sold all playing fields/stadiums to businessmen. What Uganda needs is a dedicated Minister of Sports who is also an avid sportsman/woman to inspire Ugandans, meanwhile when we are on the same topic, we might want to establish a NATIONAL SERVICE for all Ugandans just like Tanzania, Germany, Turkey and many other countries do.

We Ugandans spend time drinking, watching European football, gambling and thinking about how to steal money and kill each other. Look at the sizes and shapes of some of the police and army personnel, shocking!!!
Report to administrator
+2 #6 DathnMD 2019-07-10 12:51
There is no sense in this! Millions of Ugandans walk to schools and health centers daily.

The president and his cabinet need to walk because they last walked in 1986.
Report to administrator
0 #7 Lakwena 2019-07-10 13:45
In other words, in order save the country billions and trillions of shillings in the cost of being chauffeured and escorted by battle wagons; why don't they sometime also walk to work?

There is no sense in this! Millions of Ugandans walk to schools and health centers daily.

The president and his cabinet need to walk because they last walked in 1986.

In other words DathnMD, it is only the lazy pot belly, fat cats who need to go into such false hood parade.

Actually these fat guys and girl should be ashamed to parade their political potbellies on our streets.

This is because, while many impoverished Ugandans have small and capital C stomachs, Mr. M7, Cabinet Ministers, MPs, etc., take pride to parade their Capital D stomachs on our debt ridden Streets and roads.

That is why I like Gen Paul Kagame model figure. He is not in power only to live, to eat and fight for himself and family only.
Report to administrator
+1 #9 Zaitun 2019-07-11 09:38
Whether all of them fall dead on the way is none of my business.

All that interests me is to see them leave Uganda and government business peacefully so that we see serious man and women steering the country to sanity, and that will spare them time to for walking long distances and doing physical exercises.

No Ugandan should get impressed by this claim of trying to walk 10 kilometers on that day. Do they know how many poor Ugandans walk everyday to and fro their homes and places of work?

All these are distractions intended to gain fame which is long gone into flames.

If they want to walk, they should walk home to their villages on foot to spare the country from heavy expenditures on fuel.
Report to administrator
0 #10 MOSES KWEHANGANA 2019-07-11 18:04
Thumbs up cabinet. How i wish all districts councils borrowed a a leaf and organised similar events monthly. it is true that sedentary life is affecting the biggest chunk of our population.
Report to administrator