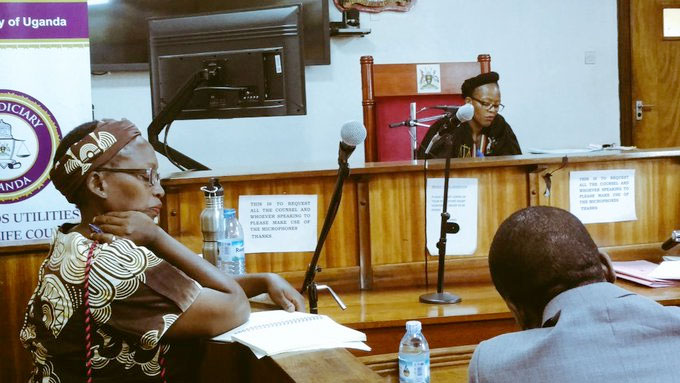 The defense team led by Isaac Semakadde has lined up 19 witnesses including doctors, professors and religious leaders. Kamasanyu has summoned the witnesses to appear in court following an application by Nyanzi’s lawyer.

Semakadde said they selected the witnesses following claims by the prosecution that Nyanzi’s birthday poem, which led to her prosecution, offends Christian morality. This stemmed from the testimony Bill Ndyamuhaki and Charles Dalton Opwonya, both prosecution witnesses during cross examination.

Ndyamuhaki told court that he judged Nyanzi’s Facebook post based on his Anglican teachings. Opwonya told court that he is a born again preacher and counsellor among others. He tried to introduce theological concepts in his testimony, prompting the defense lawyers to challenge him on the foundation of the biblical metaphors in the contested post.

He cited biblical verses from Proverbs 10:1, 29:15-17, which state that ‘a wise son brings joy to his father, but a foolish son brings grief to his mother’. Adding that “Whoever remains stiff-necked after many rebukes will suddenly be destroyed without remedy."

However, Nyanzi's defense team objected to the testimony, saying it was characterized by amateurish, imperfect and self-serving allusions of Christian morality, which ought to be challenged by summoning religious leaders and literary experts.

As a result, Nyanzi’s defense team identified the resistant Kampala assistant archbishop, Zac David Niringiye and Father Gaetano Batanyenda, the Kitanga parish priest in Kabale district. According to Semakadde, they intend to prove that contemporary standards of Christian morality are not as warped as wrongly depicted by the state witnesses.

"The major government witnesses in Dr Stella Nyanza’s case, claimed to be Christians, and they testified that they based on Christian teachings of morality to accuse Dr Stella Nyanzi of being obscene in her alleged posts. It is therefore critical that, we invite true experts in Christian theology to inform court appropriately about the contemporary standards of Christian morality and contemporary interpretations of bible verses which appear to provide a biblical foundation for the metaphors in the post in issue." said Semakadde.

The other witnesses are literature experts who have written a number of literature pieces related to the charges against Nyanzi. They include Prof Sylvia Rosila Tamale, Dr Susan Kiguli and Solome Nakaweesi. These have been at the forefront of advocating for political, social and economic rights of women just like Dr Nyanzi.

Nakaweesi is one of the fiercest feminist, who, advocated for the staging of 'The Vagina Monologue' play that was banned by government in 2005 citing its obscene content. She is also the former executive director of Akina Mama Wa Africa, a Pan-African organization that advocates for women rights and leadership.

Prof Tamale is the first female dean of the Law School at Makerere. She has published a number of literature pieces on sexuality and women.

Some of these include ‘exploring the Contours of African Sexualities: Religion, Law and Power, Eroticism, Sensuality and ‘Women's Secrets’ Among the Baganda among others.

Engineer Frank Kitumba is the former director of the directorate of Information Communication Technology Support at Makerere University.  His ICT experience is considered vital since Nyanzi is charged under the Computer Misuse Act.

Professor Fredrick Juuko is a media law scholar and the longest serving academician at Makerere University.

Dr Susan Kiguli is a creative writer and law scholar at Makerere University. She has written a series of poems including her famous African Saga of 1988, which brings together 45 poems of protest.

Others are Allan Tacca and Mildred Apenyo, a daughter to prosecution witness, Charles Dalton Opwonya. The prosecution contends that on September 16th, 2018, Nyanzi used her Facebook page to attack and offend President Yoweri Museveni using a poem as a congratulatory birthday message with obscene and indecent content. Court declined to summon Museveni, saying as a sitting president, he cannot be subjected to court processes.

Nyanzi has been in Luzira prison since November 2018 and she has since refused to apply for bail.

Museveni can be compelled to come to Court as a witness but the law protects him from appearing as an accused until he is out of office.

The state has created an impression that it is Museveni who was aggrieved by the Nyanzi's posting, he is the party that is said to have been hurt and or annoyed, how do we know that indeed those remarks annoyed him or were intended to annoy the person of the president, by him appearing in court in person

In other words Wadada, like in South Korea e.g., at this rate, Ugandans must demand for the amendment of the the law: so that a sitting president can be summoned to testify in court and/or be sued, prosecuted, imprisoned or executed if found guilty.

Otherwise even God can be denounced for being indifferent. Dr. Stella Nyanzi stood up to a bully and as a result, Mr. M7 has met his match for badmouthing Ugandans
Report to administrator
12