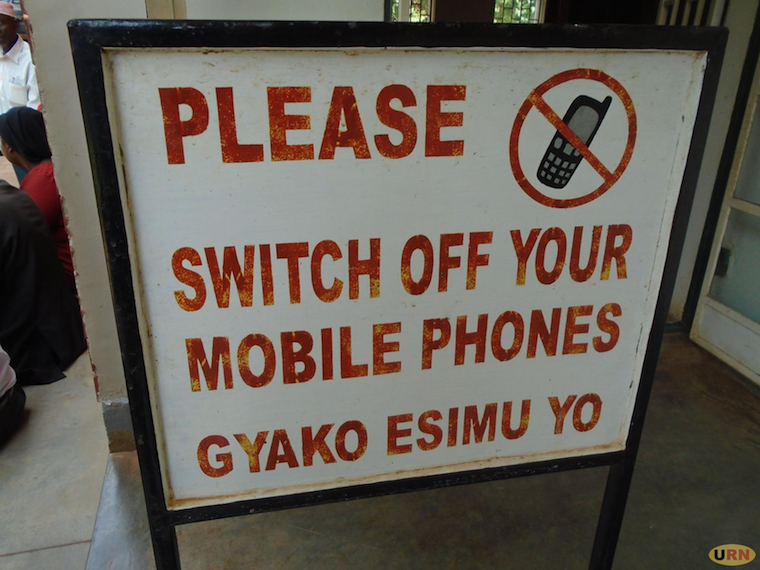 The signpost at Luweero High court

A witness in Luweero High court has been fined Shs 30,000 for ignoring court guidelines on mobile phones in the courtroom.

Justine Nabbanja, a resident of Kalongo Miti zone in Luweero town council faced the wrath of justice Vincent Okwanga after her phone rang during court session this afternoon.

Court recently issued a warning that all phones must be switched off in the courtroom to avoid interrupting sessions. The warning was fixed on four signposts and mounted around the corners of the court.

However, a special High court session presided over by Okwanga got paralyzed today Wednesday for several minutes after a phone rang from the audience.

During the time, Okwanga was cross-examining Dr Moses Byaruhanga, a police forensic pathologist in a case where one Edward Lubega of Nakaseke district is accused of killing his wife Flavia Namata. Namata’s body was discovered in River Mayanja on May 17, 2016.

The Luweero resident state attorney Beatrice Alok Odong ordered a police officer attached to the court to compel the witness to switch off the phone before the case could proceed.

But this took minutes as the officer searched for the phone inside the bag in vain in the absence of the owner who had stepped out of the courtroom, shortly before the offset of the ringtone.

Justice Okwanga then ruled that the phone be confiscated and the owner pays a fine of Shs 30,000 for interrupting the court session. He said that Nabbanja breached the ground rules of the court which instructs all people to maintain silence and switch off the phone as indicated on signposts spread all over the court.

Okwanga explained that if a phone rings in court, the first offender pays Shs 30,000 and second offender Shs 50,000. Later, Nabbanja tried to plead with the police officer and court clerks to return her phone, but was asked to pay the fine first as directed by judge and present a receipt to them before its handed back.

She abandoned the phone saying she did not have money to pay the fine, although she regretted the incident. At the time of the incident, Nabbanja was waiting to testify in another case where a one Henry Musisi is accused of stealing her motorcycle. But after the phone incident, Nabbanja abandoned the case, possibly fearing that she could be arrested for failing to pay the fine.

Breaching court orders tantamount to contempt of court, which according to a recent ruling by Justice Flavia Ssenoga Anglin is intended to send out a firm message that “court orders have to be obeyed and to indicate to contemnors that there are consequences for disobedience of court orders.