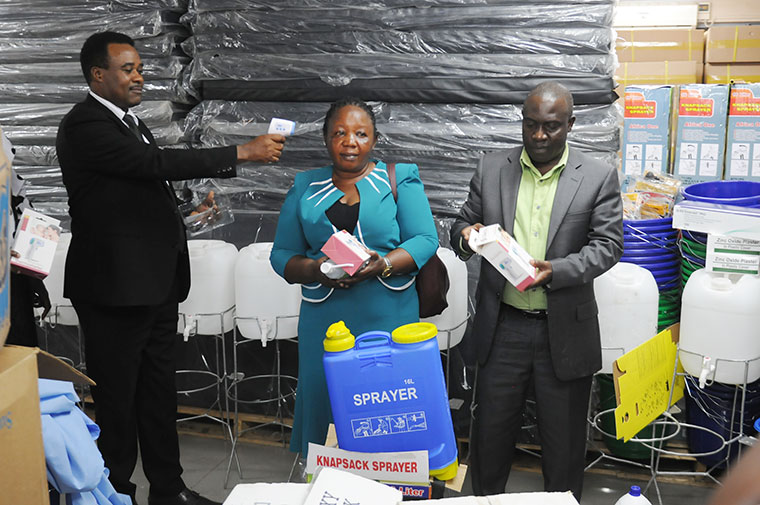 Officials receiving some of the donated items

The ministry of Health has placed four sub counties in Kasese district under surveillance for any possible cases of Ebola.

According to Allan Muruta, the commissioner for public health emergencies, the ministry is maintaining full surveillance over the sub counties of Kisinga, Bwera, Nyakiyumbu and Karambi which are considered to be Ebola hotspots.

“They are the hotspots where the cases – those that were confirmed to be having Ebola passed when they entered Uganda from the Democratic Republic of Congo,” Muruta said.

Muruta spoke as he received Ebola response supplies from the Aids Healthcare Foundation (AHF) and Uganda Cares worth $31,009 (about Shs 111.8 million). On June 11, the ministry of Health and World Health Organisation (WHO) confirmed an outbreak of the Ebola virus disease in Kasese district after a 5-year-old boy who travelled with his mother from the Democratic Republic of Congo (DRC) tested positive to the deadly disease.

Two days later, the ministry reported two other cases who have all passed on. All the victims entered through undesignated border crossings.

“Along the route, they did expose some people to the virus. We are talking about boda boda cyclists and other people they could have interacted with. We have mapped the areas where they passed and the people they came in contact with,” Muruta said.

By June 25, the number of people under the Ebola surveillance stood at 107 according to the ministry of Health.

“About a month ago, we were here calling on the African Union, WHO, national and regional leaders to respond to the neglected Ebola crises in DRC. One of our fears was the transmission of Ebola to neighbouring countries including Uganda. Indeed, our fear was founded,” Dr Penina Imutung, the AHF Africa bureau chief said as she handed over the supplies a bulk of which is designated for Kasese.

Kasese’s share is worth $24,115 (Shs 86.9 million) while the districts of Mbarara, Masaka and Kampala where symptoms of Ebola have been reported will share medical supplies worth $6,844 (Shs 24.6 million).

“AHF considers Ebola as a disease of public health concern like HIV. The organization has a statement of faith to protect public health. Ebola is a threat to public health and can negatively affect the welfare of Ugandans,” Iwutung said.