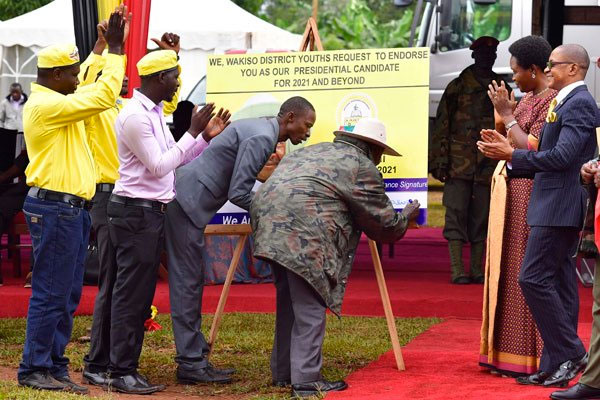 President Yoweri Museveni’s newfound preference for youths and use of unofficial structures in the running of NRM affairs has unsettled many high-ranking ruling party officials.

Over the last two months, the president and NRM national chairman has sidestepped the party secretary general Justine Kasule Lumumba, who heads the secretariat, preferring to work with a team of youthful mobilisers under his political assistant Eva Doka Babalanda.

The Babalanda team has already authored a damning report and handed it to the president. The report suggests the party has been infiltrated and needs an aggressive purge of its ranks of opposition supporters.

The report also nudged the president to sanction a new drive to recruit genuine party members. The idea, corroborated by a private investigation, insider sources said, was bought by the president.

“We are recruiting three youths per village. If there are over 60,000 villages in the country that comes to about 200,000 youths,” an MP who took part in the recruitment of the cadres told The Observer.

The target is to have at least three youth groups each composed of about 45 members who will then get development funds. This, according to the source, explains why the Youth Livelihood Funds were moved from the Ministry of Gender, Labour and Social Development to State House whose budget allocations were also increased.

“Truth is the 2021 election is going to be about youths; the generational phenomenon [by Kyadondo East MP Robert Kyagulanyi] Bobi Wine has changed the game plan and I can assure you, Museveni’s focus is on the youth; for now, there is nothing he wants the older politicians for,” the source said.

Babalanda’s activities have, however, unsettled the party’s core. Some members of the Central Executive Committee (CEC), NRM’s top most decision-making organ, wrote to Museveni on May 28 urging him to respect the party organs.

“We have observed with dismay, the targeted impunity and indiscipline with which a few of the “cadres” identified and recruited by the office of the national chairman have misused and abused the social media platforms to attempt to undermine the integrity and decisions of CEC and other organs and institutions of the NRM,” the CEC members wrote on May 28, further warning that the said impunity and indiscipline if not checked, would increase internal contradictions.

“Any attack on the organs and institutions of the NRM threatens to undermine and hijack the legitimacy of the purpose for which the organization was established,” the CEC members wrote.

They wondered why Museveni sanctioned the recruitment of three youths per village yet that wasn’t part of the resolutions passed during the CEC retreat at Chobe Safari Lodge in February. The letter is understood to have been written a day after some ministers had asked the same questions during a cabinet meeting at State House Entebbe.

Museveni reportedly told ministers he had deployed youths not to do party work but, rather, to follow up on the Operation Wealth Creation (OWC) activities following reports that soldiers under the program were not reaching the intended beneficiaries.

“He said youths were to help to ensure that OWC reaches the targeted beneficiaries, and, promised to call the youth team for a meeting to explain what he wants them to do,” a source said.

A source working closely with the youth teams said they were meant to clandestinely work alongside the formal party structures but their cover was blown by some excited members who posted their activities on social media.

The effect has been a sustained negative campaign between the two camps especially after Lumumba issued a statement declaring the activities of the Babalanda-led teams illegal.

“I would like to guide as follows; that there is no formal decision or directive of any organ of the NRM made specifically to identify and/or recruit the three cadres per village, as it is being implied in some of the social media platforms. As the custodian of the minutes of organs of the NRM, inclusive of the Central Executive Committee (CEC) meetings, I can state with no fear of contradiction that the recruitment drive is certainly not part of the 7-point Chobe Resolutions,” Lumumba wrote.

Lumumba has since chosen not to respond to attacks from the Kyambogo-based office of the NRM Chairman, hoping she may eventually earn Museveni’s sympathy. A CEC member, one of the eight signatories of the protest letter to Museveni, told this writer on June 6 at parliament that the fight is basically about who controls the NRM cash.

In fact, a source close to the Babalanda camp boasted that the balance of power within NRM had changed and it is now the Kyambogo office that calls the shots.

“Babalanda has all the money to finance the activities under her office yet the secretariat has nothing. They basically rely on the salary which sometimes doesn’t come,” the source said.

Rogers Mulindwa, the secretariat’s communications officer, said that while it is true there are groups that are strategizing, it is important for them to understand the workings of the party.

“There are people that are strategizing to get election money because some think there is a lot of it but they need to understand that we need as many fronts as possible to win the 2021 election,” Mulindwa said.

During the 2016 elections, Museveni created at least four other teams that were running parallel activities from the secretariat. For instance, Gender, Labour and Social Development Minister Janat Mukwaya ran a campaign office in Nakasero, Molly Kamukama operated from the Kyambogo office, Odrek Rwabogo operated from Buganda Road while some activities were coordinated from Luthuli Avenue in Bugoloobi.

0 #1 Rukidi The Eighth 2019-06-12 15:01
It's small groups of committed guerrillas who can work clandestinely, but certainly not NRM youth groups whose motive is to get as much money as possible from Museveni.
Report to administrator
+5 #2 Lysol 2019-06-12 20:36
Whenever the election is near, Museveni always comes with a diry scheme to steal the election; from the so-called crime preventers(which he exploited in the last election) to this one.

He has always exploited children for his political gains. The same way he used child soldiers to capture power. If it was in these days and age, he would have been prosecuted or even jailed.

He would have never succeeded. It's also a desperate attempt to frustrate Bobi Wine efforts, like he has been trying to keep Mr Wine from Buganda youths. The last kickings of a dying horse.
.
Report to administrator
+2 #3 rubangakene 2019-06-12 22:41
KAZI BUURE TUU!
Report to administrator
+2 #4 Lakwena 2019-06-13 08:22
Because of desperation due to widespread unemployment, dehumanizing youth sycophancy is the way to go.

The stupidity is that: these youth simply don't get it. The very person they are endorsing as their sole candidate is a conman who is squarely responsible for their unemployment, poverty and nightmares.

Whenever the election is near, Museveni always comes with a diry scheme to steal the election; from the so-called crime preventers(which he exploited in the last election) to this one.

He has always exploited children for his political gains. The same way he used child soldiers to capture power. If it was in these days and age, he would have been prosecuted or even jailed.

He would have never succeeded. It's also a desperate attempt to frustrate Bobi Wine efforts, like he has been trying to keep Mr Wine from Buganda youths. The last kickings of a dying horse.
.

In other words, because his aural/audio confessions and the evidences, including silent witnesses everywhere; Mr. M7 can even be prosecuted posthumously and his children and grandchildren will bear the humiliation.
Report to administrator
+2 #6 Lakwena 2019-06-13 13:34
From the intrigue hereabove, what more evidences do Ugandans and the NRM members need to prove that: Mr. M7 does not respect institutions, he uses and dump people and only fights for himself and family.