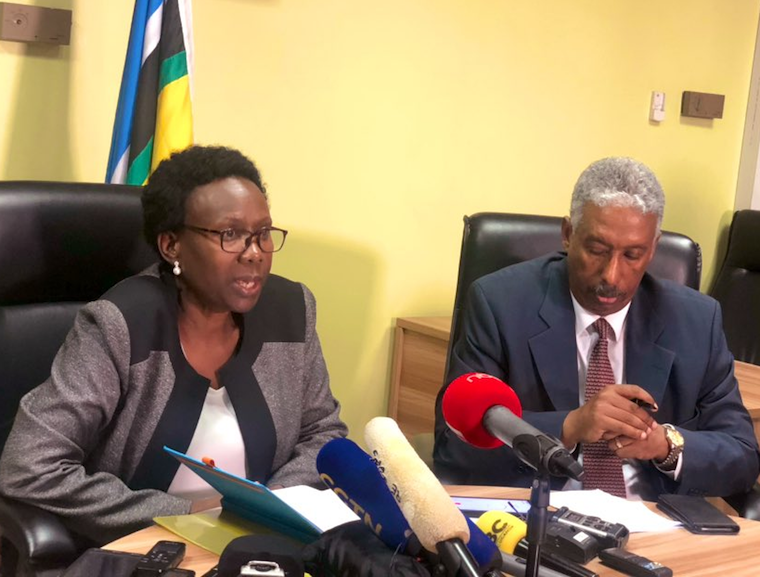 An Ebola outbreak has been confirmed in Uganda by the ministry of Health and the World Health Organization (WHO).

In a hastily organized press conference at 9 pm on Tuesday, minister of Health Jane Ruth Aceng said the confirmed case is of 5-year-old boy who'd travelled with his mother to Democratic Republic of the Congo (DRC) to nurse her father who succumbed to Ebola.

The boy's mother is of Congolese origin but got married to a Ugandan husband and settled in Uganda's western district of Kasese. The mother and the son returned to Uganda through Bwera border post on June 10 together with four other family members of Congolese origin.

According to Aceng, the family sought for medical care for the boy at Kagando hospital where health workers identified Ebola as a possible cause of illness after he presented symptoms of vomiting blood, bloody diarrhea, muscle pain, headache, fatigue and abdominal pain.

Aceng says Ugandan health officials were alerted of the presence of contacts of an Ebola case from DRC and their phone contacts provided for close monitoring by their counterparts across the border.

All the other Congolese family members have since been isolated at Bwera Ebola Treatment Unit and two of them had their blood samples taken and sent to the Uganda Virus Institute (UVRI) after they too developed symptoms similar to that of Ebola. In total eight contacts have been identified and are under close monitoring.

Aceng assured the public that Uganda has been prepared to tackle the virus for the last 10 months and there is no doubt that the virus will be contained.

In preparation for a possible imported case during the current outbreak in DRC that has claimed at least 1390 lives, Uganda has vaccinated over 4700 health workers in 165 health facilities. The ministry said it will undertake ring vaccination of the contact cases and other non vaccinated health workers.

Ebola virus disease is a severe illness that is spread through contact with the body fluids such as vomit, blood and faeces of a person sick with the disease. The symptoms can be sudden and include fever, fatigue, muscle pain, headache, sore threat.

According to WHO, people who have been in contact with someone with the disease are offered vaccine and asked to monitor their health for 21 days to ensure they do not become ill as well.

The investigational vaccine being used in DRC and by health and frontline workers in Uganda has so far been effective in protecting people from developing the disease, and has helped those who do develop the disease to have a better chance of survival.

Any suspected Ebola case should be reported to the nearest health facility or on toll free number 0800203033.

Instead running to Uganda, why don't they head in the direction of Kinshasa where the solutions to their current social political and economic problems should be.

In other words, everytime we hear about suspected Ebola cases; it is emotionally frightening, exhausting and a bad news for our vulnerable tourism industry.

Instead of unnecessarily inconveniencing others, it is high time African countries and their criminally minded leaders started solving their internal problems; especially education (public health/hygiene) and the economy.

Otherwise the international communities are already fed up of our stupidity and endless problems.
Report to administrator