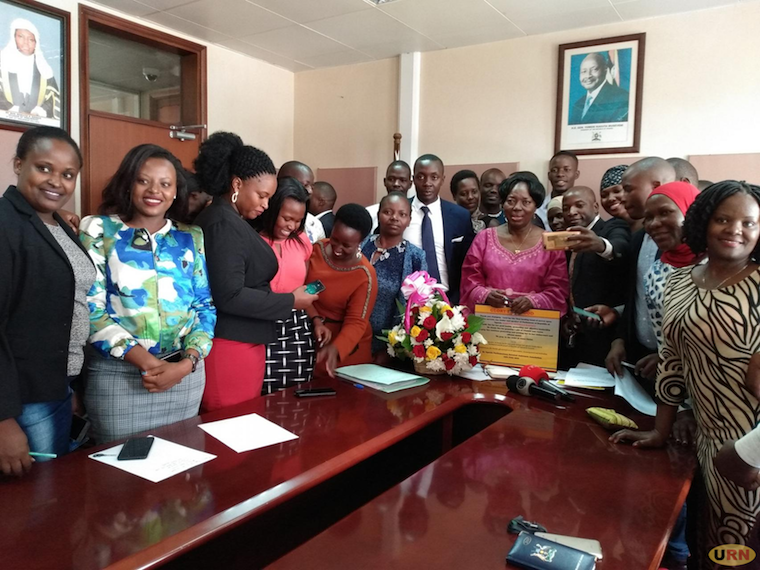 Speaker Rebecca Kadaga in a group photo with the MPs' assistants

Female personal assistants to members of parliament are accusing the legislators of sexual harassment.

The matter came up on Monday when members of the Uganda Parliamentarians Personal and Research Assistants Association presented a petition to the speaker of parliament Rebecca Kadaga over poor working conditions and remuneration by the legislators.

The association, which is led by Festo Kajura in interim capacity, is composed of over 150 members. Some female members told Kadaga that they face sexual harassment from MPs who employ them. Diana Bakaire, a member of the association, said several ladies employed by the legislators are pressurized into sex by the MPs so as to keep their jobs.

She said they were finding it to keep their jobs at parliament and pleaded for the speaker’s intervention. Bakaire said it is mostly young girls from universities and secondary schools who end up being exploited but can’t speak out.

Anna Adeke Ebaju, the National Youth MP said it is unfortunate that MPs are involved in sexual harassment of their employees. She noted that MPs are not above the law and urged the girls to speak out openly.

Benard Atiku, the Ayivu county MP says that the female personal assistants could be facing the problem since they are contracted by individual members of parliament. Apparently, each legislator hires their own personal assistant.

Atiku says those making the accusations should table evidence to avoid appearing like there are blackmailing MPs. Although Kadaga didn’t respond to the complaints of sexual harassment, she encouraged women last week to report sexual harassment in workplaces.

This came at a time when Samantha Mwesigye, a senior state attorney accused her superior Christopher Gashirabake of sexual harassment.

In a related development, the personal assistants asked parliament to take over payment of their salaries so as to avoid exploitation by the legislators. Although parliament has research officers who are attached to committees, MPs hire private individuals to do their research and pay them according to their own terms.

The personal assistants say they should be incorporated in the parliamentary system so as to add value in the work of the MPs so as to avoid conflicts related to salaries and their rights.

Kajura said there is limited consideration of the assistants as being part of the parliamentary family because there is no job security, unpredictable lunch and transport allowances and remuneration forcing several of them to suffer in parliament. According to Kajura, the assistants are paid an average of Shs 350,000 per month which is not enough to sustain their livelihoods.

He also notes that in case of high political temperature, the assistants are targeted with the aim of weakening the legislators. Kajura called on the speaker who heads the Parliamentary Commission to consider the model of Kenya where the MPs personal assistants are paid by the house.

He said incorporating personal assistants in the formal structures of parliament will improve the performance of MPs and reduce the research burden on legislators. He says that the proposals is meant to better the work of parliament, MPs and the assistants.

Kadaga noted that indeed personal assistants need to be part of the system and promised to benchmark with other parliaments and see if they can be integrated into the parliamentary system. She said they will start with access cards for the personal assistants who have been relying on the mercy of security.

She however said they need to study especially how to pay the assistants who are of different qualifications.

"We don’t yet have a budget line for it although...in the US, the senator of California has 25 assistants, so I think we need to work on the funding because your work is certainly essential to the good performance of parliament." said Kadaga.

Kadaga promised to get back to the association in July when the Parliamentary Commission sits.

Simple solution: Male assistants for male MPs and let the female MPs have one degree of freedom of choice either way.

Or rather the simple solution is: Fire all personal assistants to Ugandan legislators.

Somebody tell me what an "Assistant" who is an S.6 drop out will "assist" an MP in if not for what they are complaining about (excuse me for my near chauvinism).

Then assuming you have a better trained assistant to the likes of James Kakooza, Hannifa Kawooya, Kato Lubwama, Persis Namuganza, Amede Agnes, Judith Babirye...et al, what value would such an assistant add?
Report to administrator
0 #3 Lakwena 2019-06-13 13:58
But what if it is the other way around: the assistants are the ones sexually harassing the male MPs?

In other words according to Esther Vilar, it is the women who are always manipulating men.

And when the men reject their manipulations (advances), they (women) would resort to demonization, blackmail and/or blame men (reverse psychology): blame the victim.
Report to administrator