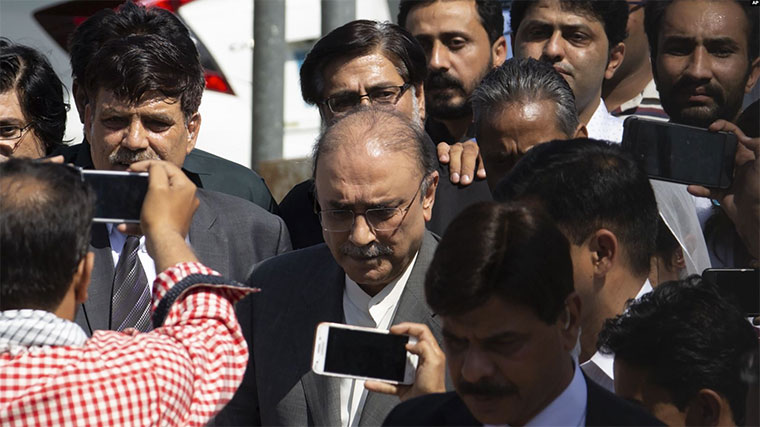 Anti-corruption authorities in Pakistan have arrested the country's former president, Asif Ali Zardari, for his alleged role in a multi-million-dollar money laundering case.

Zardari, who is currently a member of the parliament's lower house, or National Assembly, is accused of using dozens of fake bank accounts to stash away millions of dollars from Pakistan into overseas accounts. His sister, Faryal Talpur, is also accused in the case.

The former president, widower of slain former Prime Minister Benazir Bhutto, rejects the corruption charges as politically motivated. He heads the third-largest political party in parliament, the Pakistan Peoples Party (PPP), which is currently in power in the southern Sindh province.

Zardari's party won the 2008 general elections, paving the way for him to become president, until 2013, the time period during which the alleged fictitious bank accounts were created to launder money.

Anti-corruption authorities took Zardari into custody from his residence in Islamabad hours after the capital city's High Court rejected his joint request with Talpur for an extension of bail that would have allowed them to remain free despite the corruption case against them. It was not clear whether Talpur would also be arrested.

PPP lawmakers, during the ongoing National Assembly sessions, protested the action against Zardari, accusing the government of orchestrating the arrest as part of efforts to suppress political opposition.

Federal Interior Minister Ijaz Shah said the government had nothing to do with the arrest. He said his government took office last August as the corruption investigation against Zardari was in progress, initiated by the anti-corruption watchdog, the National Accountability Bureau (NAB), under the previous government.

"This is done by the NAB and the government has nothing to do with it. This is a court decision." Shah said.

Separately, former Prime Minister Nawaz Sharif is serving a seven-year sentence imposed last year for failing to disclose the source of income that allowed him to acquire a steel mill in Saudi Arabia. The three-time prime minister has been disqualified from holding political office for life.

Sharif's party won the 2013 general elections, but he was forced to prematurely resign from office in 2017 after the Supreme Court announced the disqualification verdict against him. His political party, the Pakistan Muslim League-Nawaz, was allowed to complete its five year mandated term that ended in May 2018. The former prime minister rejects the corruption charges.

Current Prime Minister Imran Khan accuses both Zardari and Sharif of massive corruption and illegally taking billions of dollars to build assets in other countries. He blames the two opposition parties for plunging the national economy into crisis through widespread corruption, which added tens of billions of dollars to the country's foreign debt.

Khan's party won the election and took charge last August, promising to end corruption and bring back "the looted money."