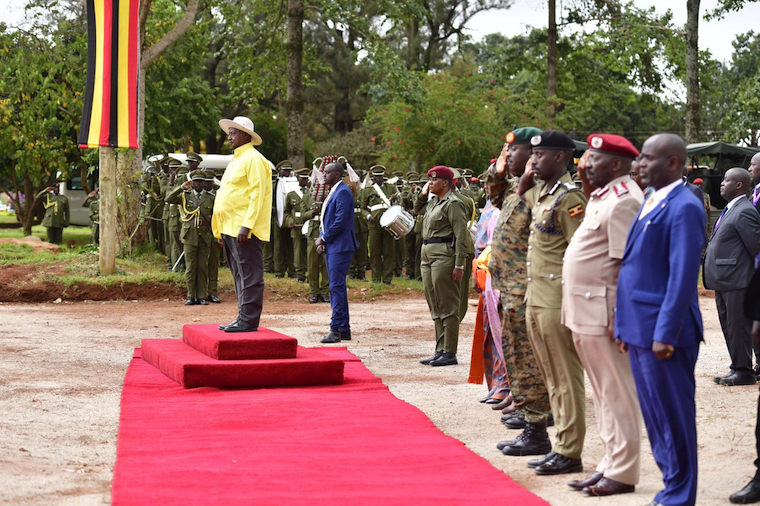 President Museveni and his security chiefs honouring the heroes

Government is set to introduce another poverty alleviation program to support development and wealth creation among Ugandan citizens, President Museveni has revealed.

Museveni made the remarks yesterday Sunday while delivering his speech during the 30th Heroes Day commemorations held at Kasanje War Memorial Grounds in Wakiso district.

He noted that the new program is set to be unveiled during the national budget reading session on June 13.  Museveni explained that although there are many several other poverty alleviation programs running across the country, the new program will finally offer the magic bullet to get out of poverty.

However, for that to happen, Museveni said Ugandans must stop being mere spectators in poverty alleviation efforts set up by his government. Museveni says that as Uganda remembers the heroes that brought peace, citizens must embrace the presence of peace to lift their own livelihood standards by engaging in wealth creation projects and utilize the development and infrastructure put in place by his government.

Since when the National Resistance Movement (NRM) assumed power in 1986, the government has experimented and implemented a number of poverty alleviation programs including the rural farmers scheme, modernization of agriculture, poverty eradication plan and prosperity for all.

During the Heroes Day function, Hajji Idris Ssedunga, the chairperson of the Uganda War Veterans Association, informed the president about the ever-increasing land evictions.

Hajji Ssedunda said that the vice has also led to the destruction of the Kiringa-Ente war memorial site. In his response, Museveni challenged tenants across the country to resist all forms of forced land evictions and land sales.

According to Museveni, the current land laws offer enough protection to tenants, giving them rights to resist forcefully evictions or buyouts. Museveni said not even the presence of soldiers or guns should intimidate tenants into submission to forceful evictions.
Further, Museveni promised to construct the Mpigi-Kasanje-Nakawuka-Kisubi road, saying it is a historic road, that he used twice during the NRA struggle and that is what led them as to capture Kampala in 1986.

+5 #1 A K Mukasa 2019-06-10 19:40
Making superficial or cosmetic changes is a futile attempt to disguise the abject failure of ill-intentioned ill-advised, ill-thought out, half baked poverty eradication programmes.

It is like putting lipstick on a gorilla. The man should win a gong for recycling. Fool me once, shame on you; fool me twice, shame on me.
Report to administrator
+4 #2 Phalanch 2019-06-10 19:42
"Gov't to introduce another poverty alleviation program" GAsiya......

The were poverty creation programs, Obviously and their results is visible on the ground through out the entire nation.
Report to administrator
+4 #3 Mumonkey 2019-06-10 19:48
As long as this government let's foreigners, specifically Indians to get away with their repressive practices against Ugandans, poverty can never be alleviated. Look at the sugar cane farmers in Busoga.

They have cultivated sugarcane all over their land and now the Indians manipulate prices, they don't give the farmers permits to harvest their cane forcing a cartel of mafias to come in and exploit the farmers.

They have created a broker system where farmers are beggars. Where in the leadership? It's all nonsense. This government has dismally failed and can never recover.
Report to administrator
+4 #4 Lysol 2019-06-10 20:43
It simple means that the current so-called wealth creation which is mere politicking has failed. miserably.

Wealth cannot be created on livestocks (nomadic lifestyle) alone. In the modern days it's all about technology and sciences, stupid. As we heading towards 2021, will hear a lot of these empty promises.
Report to administrator
+1 #5 Lakwena 2019-06-11 07:57
Except our professional conman, Mr. M7 hoodwinking Ugandans, nowhere in the whole wide world do you hear any other president talk about "WEALTH CREATION".

Even among the already wealthy countries like Norway, Sweden, US, Germany, etc. you never hear any of the leaders of these countries talk about "wealth creation".

34 years and still counting, how many "poverty alleviation programmes" do we need in order to reach the promise land?

In other words, Mr. M7's "wealth creation" rhetoric is Satanic, pure and simple.

It is the rhetoric driving the culture of dehumanizing selfishness, which defines the current level of corruption, land grabbing, cruelty, murder, human trafficking and the enslavement of Ugandans in foreign lands today.
Report to administrator
+1 #6 Lakwena 2019-06-11 08:03
In other words, instead of sitting and listening to Mr. M7's deception and clapping like idiots; it is high time Ugandans started chasing the man with a broom, whenever he shows up with all his falsehood (nonsense).
Report to administrator
+1 #7 Lakwena 2019-06-11 08:21
E.g., 34 years later; that he will now pave Mpigi-Kasanje-Nakawuka-Kisubi road, because it is a historic road, is a BS. And that he used it twice during the NRA struggle and that is what led them as to capture Kampala in 1986 is another pile of crap.

In other words, how many of all the historical roads in Luweero, which he Cris-crossed "twice" when destabilizing the country has Mr. M7 paved? BS, BS, BS.

Because, Mr. M7 only fights for himself, is why; instead of fixing the "historic" (rhetoric) Mpigi-Kasanje-Nakawuka-Kisubi road, the man started with tarmacking the road going to his home in Rwakitura. Eish!
Report to administrator
+2 #8 Kelly 2019-06-11 08:44
Wait a minute! This time I suspect the overall coordinator will be the "highly-skilled-indefatigable-intelligent-highly trained and experienced-Economist" Maj. Gen Muhoozi Kainerugaba.

Just as a reminder his uncle Gen. Caleb Akandwanaho (S.6 dropout) is coordinator Operation "Wealth" Creation. His mom is Minister of Education and Sports.

His aunt is Jolly Sabune-ED Cotton Development Organization, another aunt Dr. Kajubi is a board member at Education Service Commission.

Wait a minute! This time I suspect the overall coordinator will be the "highly-skilled-indefatigable-intelligent-highly trained and experienced-Economist" Maj. Gen Muhoozi Kainerugaba.

Just as a reminder his uncle Gen. Caleb Akandwanaho (S.6 dropout) is coordinator Operation "Wealth" Creation. His mom is Minister of Education and Sports.

His aunt is Jolly Sabune-ED Cotton Development Organization, another aunt Dr. Kajubi is a board member at Education Service Commission.

In other words Kelly, "nepotism" is a dirty, stinky word. And apparently that is what the First family smells of.

But how many times has Mr. M7 condemned sectarianism, tribalism, nepotism etc., etc.?
Report to administrator