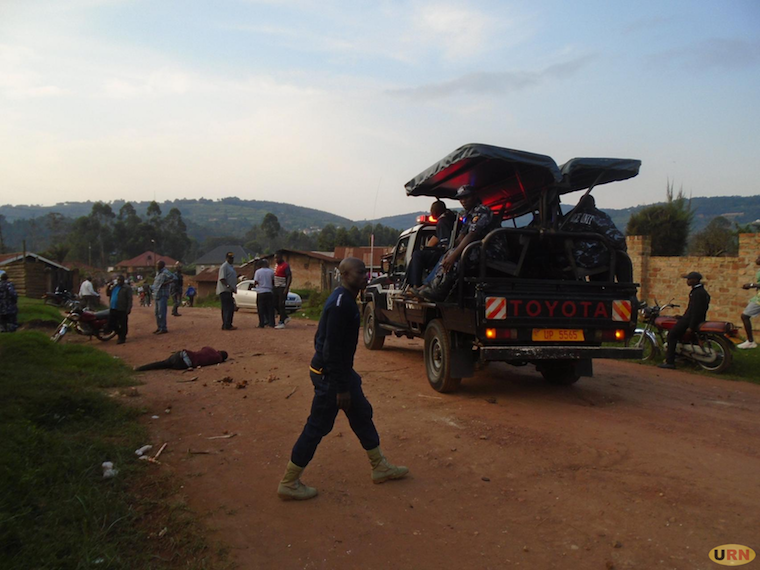 At least one student has been killed in clashes between students of Kigezi high school and their rivals from Nyabikoni secondary school in Kabale district.

The deceased, Rogers Bakashaba, a Kigezi high school student and resident of Mbarara district met his death at around 5pm on Sunday evening.

According eyewitnesses, trouble started after a group of boys from Kigezi high school escaped from school armed with knives, machetes, clubs and sticks and invaded a boys hostel at Nyabikoni secondary school located in Kanyakiriro village in central division in Kabale municipality.

Charles Bisaati, the Kanyakyiriro village LC 1 chairperson and Peace Aturinda, a resident of the area, say about four students from Kigezi high school stormed the hostel before they were joined by their colleagues.

They students of Nyabikoni fought back using stones, clubs and iron bars. In the ensuing scuffle, Bakashaba was clobbered to death. By the time anti-riot police arrived to quell the fight, Bakashaba had already breathed his last. Four other students of Kigezi high school were reportedly rushed to Kabale regional referral hospital in critical condition.

About 31 students from Kigezi high school were arrested and locked up at Kabale central police station. Police calmed down students of Kigezi who were still armed with clubs and sticks and wanted to avenge Bakashaba’s death.

Elly Maate, Kigezi region police spokesperson, says police haven’t yet established the cause of the attack by Kigezi high school students. Maate says police have taken charge of both schools to prevent further attacks as investigations into the matter continue.

Rev. Fr. Christopher Busingye, the director of Nyabikoni and his head teacher, Apollo Barigye declined to comment on the matter since the situation was still tense. None of the administrators of Kigezi high school was available for comment.

Kigezi is currently operating without a substantive head teacher following the transfer of Stephen Mugume to Kichwamba secondary school in Kamwenge district. Robert Katebarirwe, the current head teacher of Nyaruhanga high school in Ikumba sub coounty in Rubanda district declined to take up the appointment.

Will it ever end in my life time ??!! Poor Uganda!!!!
Report to administrator