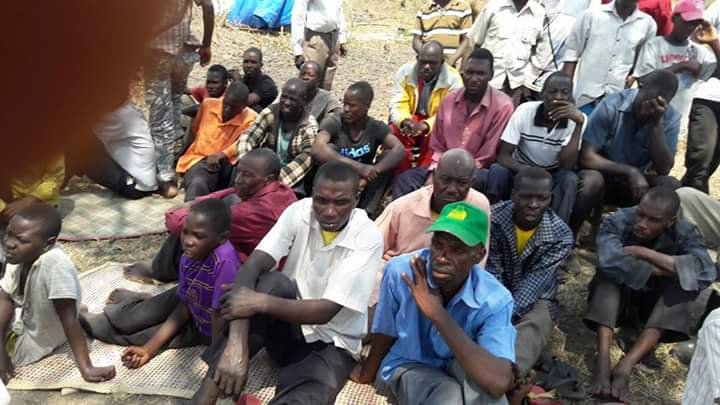 Kassanda residents during an earlier meeting over land ownership

Despite the efforts by institutions like the Land Commission of Inquiry to bring sanity in the escalating and rampant land grabbing and evictions, more and more people have continued to take the law into their hands to grab land with impunity.

Hussein Kavuma, allegedly grabbed the land belonging to ex-servicemen who had settled in the area for many years. Kavuma, whose daughter is also an area member of parliament, reportedly told the evicted residents that the land belongs to President Yoweri Museveni. Kavuma is also being accused of using a vehicle with a UC (State House) registration number plates to threaten residents..

During the earlier violent evictions during this year’s Easter holiday in April, one resident identified as Tonny Semata, was hacked on his right hand while churches, a mosque and a school were also demolished.

Semata, 30, a father of three and a resident of Nalutuntu, who was trying to rescue some of his property from the fangs of a road grader knocking down houses, had his hand cut by the machete-wielding goons hired to evict people in the area.

Bukoba residents say that they identified most of the people who evicted them as security guards working in sugarcane plantations owned by Asian businessman Abid Alam. Alam himself has severally been mentioned in other land grabbing  and illegal eviction cases in Kassanda and elsewhere.

Semata is among the 200 families and over 400 residents that have been evicted from Bukoba, an area that has been haunted by fears of violent land evictions like an avenging ghost.

In his testimony before the Land Commission of Inquiry into land matters chaired by Justice Catherine Bamugemereire, recently, the LC 1 chairperson for Bukoba village, Charles Bukenya Mutaawe, narrated what transpired during the ordeal.

Bukenya stated during cross examination by the Commission’s lead counsel, Ebert Byenkya, how the land dispute, which began way back in 2007 has affected the livelihoods of the people in the area.

With a haunted look crossing his face, Bukenya broke down at one point, and wept bitterly, forcing Justice Bamugemereire, to briefly adjourn the hearings to allow the witness recompose himself.

“We want him to tell us how he is trying to drag the president’s name into this land issues.” he said.

Appearing before the Commission, Kavuma, who looked nervous and superfluously confident, answered questions inconsistently, had initially denied having a hand in the land grabbing and evictions.

However, after a rigorous and intense cross examination by Justice Bamugemereire, the unpredictable Kavuma revealed that out of the 500 acres of land he grabbed, 183 acres were given to the senior presidential adviser on legal matters, Florence Kiconco. Asked what Kiconco is doing with the land, Kavuma said “she is rearing goats my lord”

The member of parliament for Kassanda South, Simeo Nsubuga, told The Observer that he has since brought the issue to the attention of the speaker of parliament, Rebecca Kadaga.

“For me as an MP, I have done my part. I have talked to the speaker and the select committee of parliament. I want the committee to go on the ground and see what is happening in the area,” Nsubuga said.

“But what surprises all of us is that even as these crimes are going on, no action has been taken. Even police is aware.” Nsubuga added.

Nsubuga is a former police officer and police spokesperson who quit to join elective politics.

Land is a significant resource, both cross-cutting and critical to achieving the United Nation’s Sustainable Development Goals (SDGs).  SDGs, are a set of 17 Global Goals to be achieved by 2030, and a universal call to action to end poverty, protect the planet and ensure that all people enjoy peace and prosperity.

The 2030 Agenda for Sustainable Development contains land-related targets and indicators under SDGs 1, 2, 5, 11 and 15. No poverty, zero hunger, gender equality, sustainable cities and communities, and life on land.

In 2007, Bukoba residents petitioned President Museveni to intervene in the land conflict after Alam Group of Companies started setting up a sugarcane plantation in the area leading to evictions of many residents.

The president assigned his then vice president Prof Gilbert Bukenya to mediate. But sanity has never been restored in the area.

The fresh land violence in the area comes amidst the heightening levels of land cases that have caused pain, loss of lives and untold suffering to thousands of people, who always wake up in the dangerously cold morning chills to till the land as the only source of livelihoods.

They will grab and grab until they are evicted out of power.....

In other words it’s only their eviction from power that will stop the land evictions not the spineless Bamugemerire commission! Her moratoriums are ignored by everyone, hence of no effect!
Report to administrator
+1 #3 Stewart 2019-06-10 11:53
Its so so unfortunate, the Baganda who were the main supporters of NRA/NRM bush war have been the biggest losers in the last 33 years, worse is their Kabaka can not do anything to save them, what a mess, !!!!
Report to administrator
+1 #4 Lakwena 2019-06-10 11:59
But for how long will a few thugs continue to dispossess thousands of Ugandans their rights to land and/or entitlement?

Eish!, an eye for an eye, tooth for tooth, violence for violence. Otherwise the impunity of grabbing (corruption) has become a culture and a norm; especially for those who have acquired dirty wealth and political power.