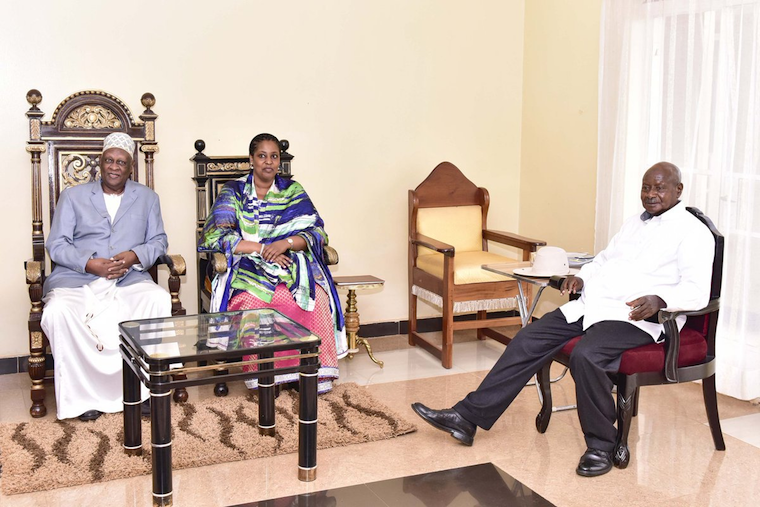 President Museveni during a courtesy visit to Omukama last month

Preparations are in high gear in Bunyoro-Kitara kingdom for Tuesday’s 25th coronation (empango) anniversary of Omukama (king) Solomon Gafabusa Iguru IV. Omukama Gafabusa ascended to the throne on June 11, 1994 following the restoration of kingdoms by the government.

This year's celebrations will take place on June 11 at the Karuziika Royal Palace in Hoima district and President Yoweri Museveni is expected to grace the event as chief guest.

Empango are anniversary celebrations done every year and it’s the time the king takes stock of what has been achieved throughout the year and makes projections for the coming year. Apollo Rwamparo, the kingdom’s second deputy prime minister, said, this time it will be special since the king will be taking stock of his 25-year reign.

“Unlike the previous anniversaries where the king addresses his subjects on what had transpired in a year, this time he will be taking stock of his 25 years’ reign and also make promises for the next 25 years,” he said.

Rwamparo was speaking at MTN offices in Kampala where the telecom announced a Shs 20m contribution to the Obukama Bwa Bunyoro- Kitara towards the organization of Empango celebrations.

Since the function will be bigger, the kingdom’s budget estimates stand at Shs 684m - which corporate companies and subjects have helped to fund both in cash and kind. Enid Edroma, the general manager, corporate services at MTN said the company recognises the pivotal role the kingdom plays in development.

“The kingdom’s rich cultural heritage and activities have created peace and stability that is enjoyed in the region,” Edroma said.

She added; “Peace is key ingredients that attract investment; MTN Uganda also took over Kigorobya health centre III and refurbished and equipped it.”

Some of the activities to mark the anniversary include renovations of the palace,  sports tournaments including football tournaments which kicked off last month; the Empango run, boat races among others.

Phillip Katahoire, the kingdom minister for external relations said, the king has been visiting different counties of Kiryandongo and Buliisa meeting his subjects and before the official celebrations; he will also visit Masindi district.

The kingdom also organized “On the eve that is June 10, the king goes to church and then on the D-Day, there will be rituals (Emikolo ehondera Empango) such as Okutoma Empango – loosely translated as sounding the drum and other series of activities,” said Rwamparo.

According to Katahoire, Omukama has spoken against early marriages and HIV/Aids and he has also pushed for the return of the kingdom’s property since 2000.

“A lot of property was returned by the central government and has been put in good use, also he has worked with government to see that several projects are established in the region,” he said.

Some investors the kingdom is proud of include Kinyara Sugar and other investors in the oil and gas fields.

“The kingdom has also been active in tree planting especially in the Albertine region where oil is being drilled and also there has been promotion of agriculture and discouraging the growing of tobacco,” Rwamparo said.

In other words, why e.g. does Mr. M7 always sit badly (disrespectfully), either as a visitor or hosting visitors.

Social etiquette demands that as a guest or a host, wherever and whenever you go, one must always sit courteously (properly).

Be humble as a guest or a host!
Report to administrator