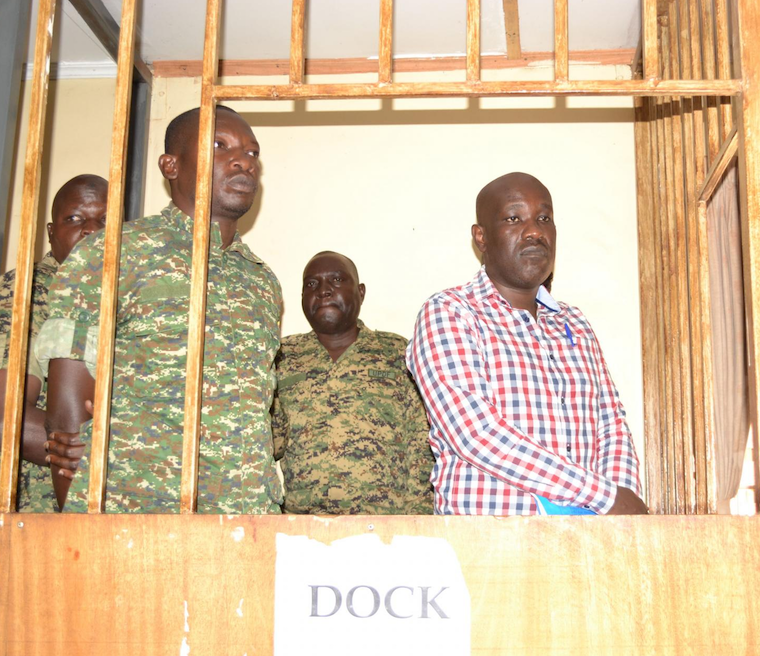 Kipoi and his co-accused in the Army court earlier

Former Bubulo West member of parliament Tony Nsubuga Kipoi has been released on bail by the General Court Martial.

Ssekayita argued that since the prosecution had not filed its response to the amnesty application filed by Kipoi, the suspects should be released on bail without sureties as it is provided for in the constitution.

Gutti released the suspects on bail and directed them to report to the registrar every first Thursday of the month. Kipoi was extradited from Botswana in March 2018 after he had reportedly conned unsuspecting number of Tswanas in Botswana pretending to be a witchdoctor. He was however arraigned before the army court together with his co-accused on offences related to security.

Prosecution alleges that between 2011 and 2012 in diverse places in Uganda specifically in Kampala, Mpigi, Luwero Entebbe, Fort Portal, Mbale, Masaka and Nakasongola, the accused contrived a plot to overturn the government of Uganda.

The suspects reportedly organized meetings, mobilized funds; acquired firearms and military training in the Eastern Democratic Republic of Congo also mobilized and recruited people into their rank and file. However, the suspects pleaded not guilty.

In April, Kipoi applied for amnesty and denounced all the rebel activities. However, prosecution was today supposed to reply to his amnesty request. However Lt Col Mugisha told court that he had not yet received feedback from the investigating officers, hence the release on bail.

Last year, Kipoi's lawyer Major Ronald Iduuli petitioned the Amnesty Commission asking them not to allow any application for amnesty by Kipoi. Iduuli told the commission in his petition that he was being coerced to apply for amnesty.