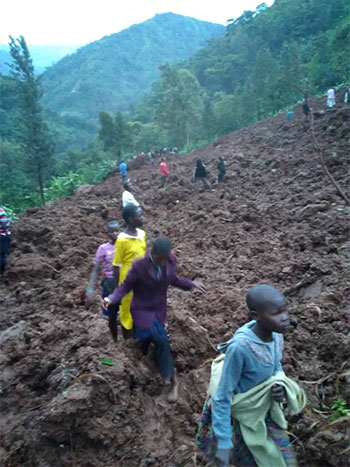 At least five people have been confirmed dead following fresh landslides in Bududa district. More than 50 others are reported missing since the landslide that came with a heavy downpour on Tuesday evening.

Reports indicate that the rains started yesterday at around 8:30pm, mostly affecting the areas of Bunamwamba North, Bunamwamba Main and, Bunamwamba South in Buwaali sub-county. About 150 houses were reportedly razed by the landslides, according to the Uganda Red Cross Society.

The deceased include Mary Cerina Kibone, 73, Patrick Wakuwema, 4, Seera Miriam Alice, 7, Mary Kimono, 13, and another male child whose names are not yet known. The bodies of the deceased are currently at Bukalasi police post. It is said that landslides swept through over 100 homes.

The Office of the Prime Minister says that search and rescue teams have been sent on the ground to work with local authorities and other agencies to establish the facts to inform the next course of immediate action.

In the meantime, people living on risky and dangerous slopes of Mt Elgon have been advised to move away and seek shelter with friends and relatives in lower and safer grounds as the rains continue.

The latest landslide comes a few months after the government started resettling the first batch of the survivors of the October 11, 2018 landslides in the same area and other places in Bugisu sub-region to Bulambuli resettlement on May 19.

In the first phase, 101 houses have been built in Bulambuli out of a planned 900 houses. In total, over 100,000 people living precariously on the slopes of Mount Elgon are estimated to be at great danger and requiring relocation.

The second phase of construction of 140 houses is underway.

The landslides that occurred at about 11:30 pm on Tuesday caused the flooding of River Suume, which killed 3 people and destroyed homes and property. https://t.co/ytYJuZq5vN

Their motto should be "KAA CHONZO" (BE PREPARED TO DEPLOY ANY MINUTE ANYWHERE IN UGANDA). They should not just carry on in their huge farms as if they don't care/know! asenior government representative should also fly their with a helicopter to share the grief!
Report to administrator
12