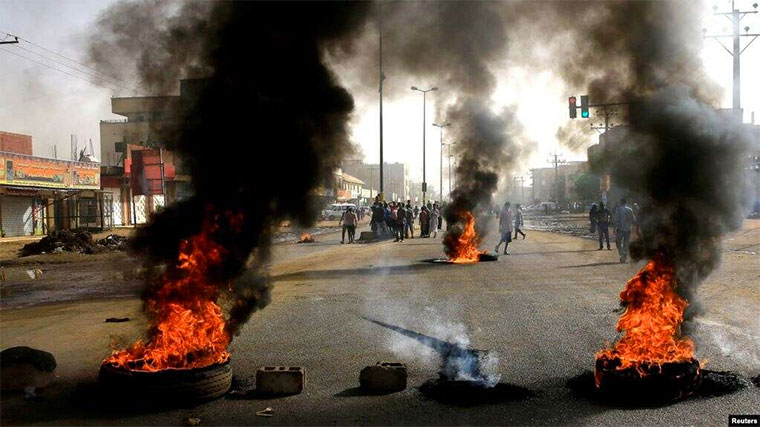 Sudanese protesters use burning tires to erect a barricade on a street, demanding that the country's Transitional Military Council hand over power to civilians, in Khartoum

Sudan's ruling military council says it is canceling its previous agreement with civilian protesters following Monday's attack by security forces on a protest site in Khartoum that left at least 30 people dead.

General Abdel Fattah al-Burhan, the head of the Transitional Military Council, announced Tuesday in a televised address that it will hold elections within the next nine months. General Burhan said the elections would organize under regional and international supervision.

Monday's raid on the protest site outside the Defense ministry capped a breakdown of relations between the military and the Alliance for Freedom and Change, a coalition of protesters and opposition parties. The two sides had been negotiating over the makeup of a transitional government following the military's ouster of President Omar al-Bashir in April, after mass protests against his autocratic rule.

The parties had agreed to form an interim government that would rule Sudan for three years before handing over power to a permanent civilian government. But the talks broke down last month over differences on the leadership of the transitional government.

Details of the raid

On Monday, with batons in hand, Sudanese forces dressed in police and military uniforms surrounded protesters near the military headquarters and began forcing the demonstrators to leave.

Witnesses say that by mid-afternoon on Monday, the area had been cleared. The protesters had been staging the sit-in since April at the start of the negotiations. The Central Committee of Sudan Doctors, which is close to Sudan’s protest movement, said Tuesday the death toll has risen to 35 with many more injured.

In a statement released by his spokesman in New York, United Nations Secretary-General Antonio Guterres condemned Monday's attack in Khartoum.

"The secretary-general reminds (Sudan’s) Transitional Military Council of its responsibility for the safety and security of the citizens of Sudan," the spokesman said. "He urges all parties to act with utmost restraint."

Guterres also called for unimpeded access for first responders at the sit-in site and in hospitals where the wounded are treated, and called on Sudanese authorities to conduct an independent investigation and hold people accountable for the deaths.

"Those exercising their rights to freedom of peaceful assembly and expression must be protected, not targeted or detained," Bachelet said in a statement. "This is a fundamental tenet of international human rights law."

The U.S. embassy in Khartoum tweeted that the attacks on protesters "must stop."

The British embassy condemned the attack and called it an "outrageous step that will only lead to more polarization and violence."

The Declaration of Freedom and Change Forces — a coalition of political parties leading the protest — issued a statement calling on all demonstrators to continue with"the revolution." Protesters later blocked roads leading into and out of Khartoum.

Protest organizers have suspended further talks with the Transitional Military Council and called for civil disobedience across the country until the military hands over power to civilians.

Ugandans' tribal allegience makes it impossible to have 1 common opposition leader, so UNITY is impossible, so Museveni has nothing to worry about!

Ugandans ensurer/bolster Museveni's stay in power the tribalistic system & fake elections they go along with in peace, thus tell the outside world 'stay out of our affairs'!

Unless Ugandans die with Museveni, they will have to look at one another after he is dead!

Will tribal leaders become humans with hearts & form Independent Tribal States then gavern & serve the people they pretend being tribal leaders of then?

UNITED Sudanese must now know they have no civilian leader the military can hand over power to, so they cannot conclude their move as they wish!...
Report to administrator
0 #2 Akot 2019-06-04 19:12
...USA/EU/UN came out to side with UNITED people of Sudan & condemned the military action, but cannot do more as there is no civilian leader ready to help the people conclude their move!

It's 1 thing people UNITE to throw out dictators, it's yet another they get what they want, which can only be if they have the alternative leadership to take over form the disposed ones!

But Ugandans can UNITE briefly just to ensure Museveni is out, then go seperately tribally immediately to avoid what goes on in Libyay: they UNITED only to throw Kadhafi out then went streignt to tribal belonging have since, been at war that makes no sense!

But of course Kadhafi tribalistically divided & ruled & that's all Libyans know; tribalism, just like Museveni does with Ugandans even when he has no tribal land in the zone!
Report to administrator