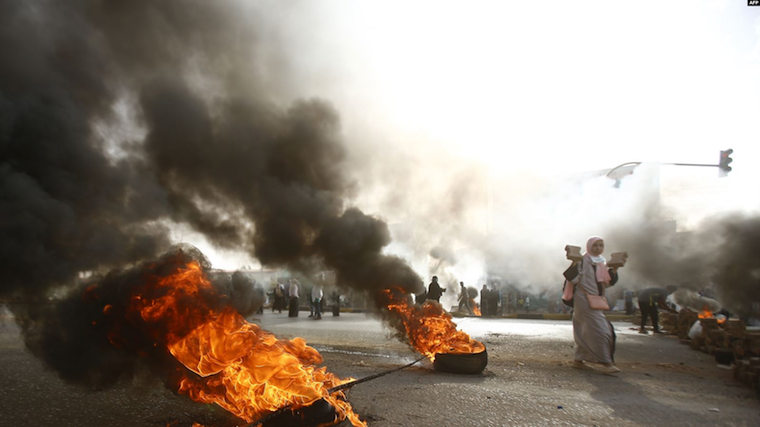 Heavy gunfire has erupted in Sudan’s capital as security forces close off streets and attempt to clear protesters from a two-month sit-in calling for democracy, say activists.

The Sudanese Professionals Association, the main protest group, accused the military of staging a coup against them and vowed more protests and nation-wide strikes.

"A big group from the Rapid Support Forces attacked us in the sit-in area," recalled protester Abdu Anas who witnessed the attack.

"They then surrounded the army headquarters’ buildings and gates. There was no army, we were attacked by a huge force with live ammunition. There were many casualties, we moved to the Burro area now and we're surrounded."

Thousands of protesters responded Monday by blocking roads and burning tires in parts of the capital. Sudan’s Transitional Military Council was set up in April after the army overthrew longtime president Omar al-Bashir.

The council has agreed in principle to share power with civilians but talks on forming a transitional government have stalled. The TMC said the raid on the protest camp targeted “criminal elements” near the protest site and that the protesters themselves were safe.

Shams Eldin Kabbashi, spokesman for the TMC, says the area next to the protesters’ sit-in in front of army headquarters is well known as a focus to many negative attitudes. "They threaten the safety and security of Khartoum citizens," he said.

Despite the violence, the TMC said ongoing talks between the military and protest leaders on a transitional government were expected to continue later Monday or Tuesday. But Sudan’s opposition and protest groups denied talks were possible after the violence. In a statement, they said they were halting all contact and negotiations with the military.

The raid on the protest camp was not unexpected. A military statement on last Thursday had called the sit-in a threat to national security. The United States embassy in Khartoum on Monday condemned the violence. In a Tweet, the embassy said Sudanese security forces’ attacks against protesters and other civilians is wrong and must stop. Responsibility, it read, falls on the Transitional Military Council.