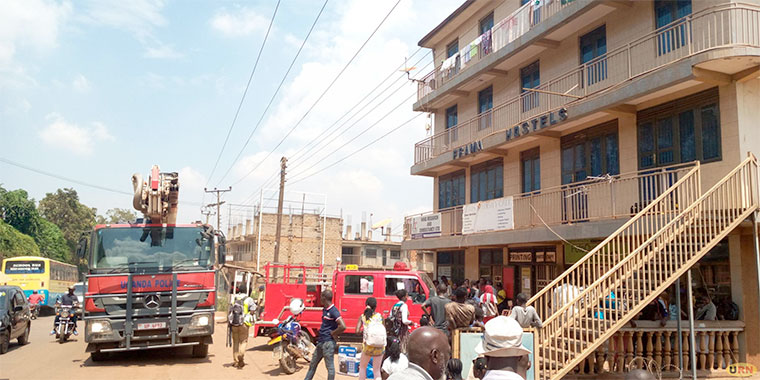 A number of students have lost property following a fire that gutted Frama hostel in Kikoni, Makerere this afternoon. Eyewitnesses say the fire started a few minutes to one O’clock on Sunday, destroying part of the structure located along Sir Apollo Kaggwa road, on the outskirts of Makerere University.

Moses Chilla, a first-year student of Bachelor of Social Sciences at Makerere University told URN that he was forced out of his room on the ground floor due to the thick smoke and noise from the neighbours who were asking students to vacate the hostel. Chilla added that fire could not be contained by fire extinguishers at the hostel because it was too much.

“By the time we realized it was burning, fire extinguishers could not help. It needed something more than that. We started fighting it using water from these tanks but it was still not making sense. And in about 40 minutes, police firefighters came in,” one of the students said.

The hostel was due to close on Monday, June 3 for the end of the semester but some of the students said they were due to report to the university for the recess term. Angella Kabitanya, a second-year student of Agri-business at Makerere University says she was suffocating from the upper floor until the police came to their rescue. According to Kabitanya, they struggled to escape the fire due to the heat and thick smoke that moved from the lower floors where they were supposed to pass.

"I saw a lot of smoke and I was suffocating when the smoke was too much - rising from the down floor because the fire started from the down floors. I was looking for the outlet and it was nowhere till support came and they tried to put out the fire. I had a friend, whom I was with and were living together at the same level G up. We were looking for the outlet but it was nowhere. We were up there confused, everything was dark but thank God nobody has died." Kabitanya said.

John Baptist Male Salongo, the proprietor of Frama hostel said the majority of the students had left for holidays while others were preparing to move. He says however he was preparing to receive students studying recess at Makerere. He said that the fire did not leave immense damage apart from burning down the room in which it started and one hostel store. He says he suspects that a student in whose room fire started could have left some appliances running on power.

Located west of Makerere University, the mixed students hostel has a capacity of 170 residents.