The Observer
Log in
Updated seconds ago
Most Popular:
10 - Eight workers injured in Tembo Steel Mills blast
9 - When Janet, MPs faced off
8 - Minister Rwamirama dares Ssempijja on NAGRC
7 - Libya's Tripoli gov't quits UN talks after Haftar forces attack
6 - Law graduates from Rwanda petition Kadaga over failure to practice in Uganda
5 - Army plucks Besigye from Sunset hotel in Jinja
4 - Tondeka metro: will it be a blessing or a curse?
3 - BESIGYE: I’m not going anywhere
2 - How Stella Nyanzi gives Makerere the identity of a university
1 - One shot dead as police battles Bobi Wine supporters in Nansana
Free: The Observer Mobile App - Exclusive Content and Services 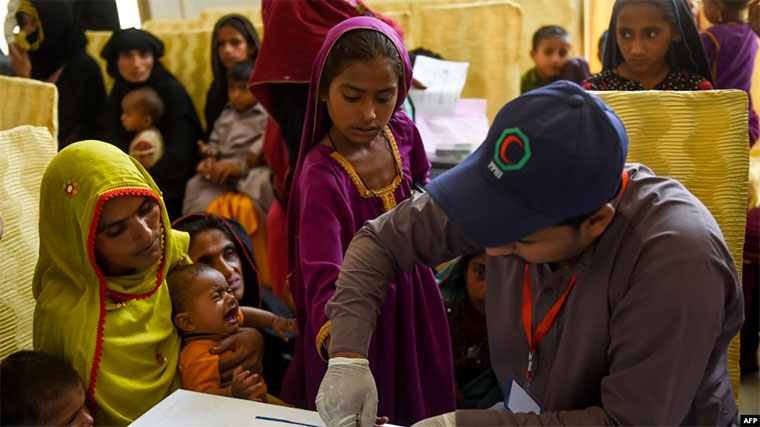 A joint rapid response team of experts from the United States and the U.N. World Health Organization arrived in Pakistan Tuesday to support the response to the country’s “biggest” outbreak of HIV infections in a southern district where more than 700 people, mostly children, have been diagnosed over the past month.

Nearly 22,000 individuals have been subjected to blood screening since the outbreak was first reported in Larkana on April 25. The district, with an estimated population of 1.5 million, is located in Sindh province and it has previously also experienced repeated, though limited, outbreaks of the virus, which causes AIDS.

The major testing program is ongoing and local officials say hundreds of people line up everyday outside screening camps to get tested voluntarily after watching news on television about the HIV epidemic in their area.

“More than 80% of those infected are children less than 15 years old,” said Dr Maria Elena G. Filio-Borromeo, UNAIDS’ country director for Pakistan and Afghanistan. She spoke to VOA from the Pakistani province where her agency is leading the coordination and facilitation of support from U.N. agencies to help local partners effectively respond to the crisis.

Borromeo noted that more than half the children affected are under the age of 5.

“This poses a particular challenge. It is likely that they got the virus through unclean needles and syringes, or through unsafe blood transfusion,” she said.

The UNAIDS country chief would not, however, speculate on exactly what might have caused the HIV outbreak. “It is a very different profile of outbreak, so a thorough investigation is needed,” Borromeo emphasized.

She said that the 11-member visiting team of experts from WHO and U.S Centers for Disease Control and Prevention (CDC) landed in the provincial capital of Karachi. Borromeo added the team is visiting the country at the request of the Pakistani government and they would work closely with local partners to carry out the investigation for up to three weeks to ascertain the source of the outbreak and controlling it.

After the outbreak investigation, she stressed, a "huge amount" of work is expected ensuring that the root cause of the outbreak will be addressed, and future outbreaks will be prevented.

“In most cases, parents of the infected children have been tested negative for HIV, which is a rare and extremely worrisome finding,” according to Zafar Mirza, who is the advisor on health to the federal government.

Mirza said that used syringes being repackaged and sold in Pakistan, contaminated blood transfusion as well as a “faulty” infection prevention and control system in hospitals could be the factors behind the outbreak in Larkana.

“Either unsafe injections are spreading the virus in children or there is another reason that we have been unable to determine so far,” the Pakistani advisor explained.

He said he was hopeful the international rapid response team would be able to ascertain the reasons, noting the ongoing efforts to control and investigate the underlying causes of the HIV outbreak in Larkana were not sufficient.

Critics say the outbreak demonstrated "public health failure” particularly in Sindh, though the health sector elsewhere in Pakistan also faces critical challenges stemming from a lack of funding and priority. Pakistani and U.N. officials do not rule out the possibility that the HIV outbreak is the outcome of shady medical practices in private as well as public hospitals.

Out of an estimated 600,000 unqualified doctors unlawfully practicing in Pakistan, 270,000 of them are working in Sindh, according to UNAIDS. Mirza cautioned that reported cases of HIV/AIDS in Pakistan are far less than the actual magnitude of the problem. He says that official estimates put the number of HIV/AIDS carriers in the country at around 163,000.

“But only 25,000 of them are registered with our national and provincial HIV/AIDS treatment centers, and out of them, merely 16,000 visit the programs routinely to receive their medicine,” the advisor noted.

Now it is time for them to make money off the poor people and guess what, they dont care
Report to administrator