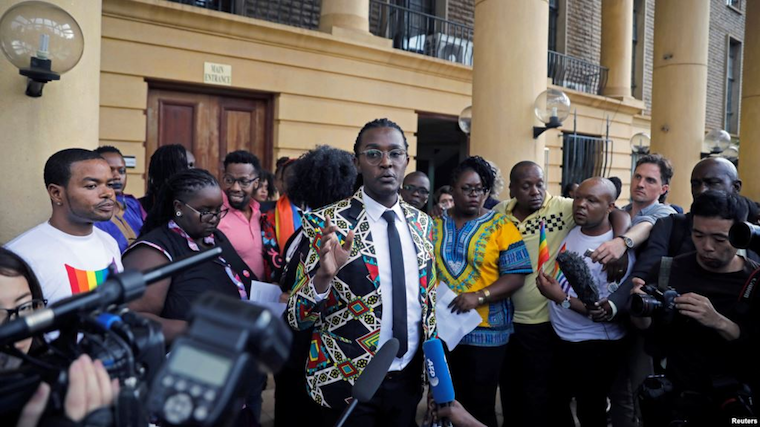 Kenya's High court has upheld the law that criminalises homosexuality.

The much-anticipated ruling Friday was decided by a three-judge bench on Kenya’s High court in Nairobi. The laws, sections 162(a) and (c) and 165 of Kenya’s Penal Code, criminalize consensual sexual conduct between two adults of the same sex, an act that as of Friday’s ruling remains punishable by up to 14 years in prison.

Justices Roselyn Aburili, Chacha Mwita and John Mativo issued the ruling. In arguments read in court, the three judges stated there was not enough evidence of discrimination against members of the LGBTQ community.

The judges also argued that decriminalization would open the door for same-sex marriage and said there was no scientific evidence that pointed to LGBTQ persons being born as they are.

“Decriminalizing the impugned provisions would indirectly open the door for unions among persons of the same sex. If this were to be allowed, it would be in direct conflict with article 45 sub article 2 of the constitution. We take this view fully aware of numerous decisions from different foreign jurisdictions, which we have referred to that have decriminalized provisions similar to ours, however persuasive this decisions may be, they are not binding on this court,” Aburili said.

Friday’s ruling is a result of a petition that dates from 2015, when the National Gay and Lesbian Human Rights Commission (NGLHRC), Gay and Lesbian Coalition of Kenya (GALCK), and the Nyanza Rift Valley and Western Kenya Network (NYARWEK), all LGBT rights organizations, filed petitions with Kenya’s high court asking it to declare Sections 162 (a) and (c) and 165 unconstitutional.

Court hearings began in February 2018. In a series of proceedings through 2018, the petitioners argued the laws, as stipulated in the penal codes, violated the right to privacy, freedom of expression, the right to health, human dignity and the right to freedom from non-discrimination.

The petitioners behind the historic case wanted the high court to declare unconstitutional the sections of the penal code that discriminated against members of the LGBTQ community.

Eric Gitari was one of the petitioners who was present during the ruling.

“It sends a very chilling message, not just to LGBT people in Kenya but LGBT people across the African continent that there is preference, as you heard the judges say, certain cultures, which is the heterosexual culture and protection of the family. When judges have to weigh the protection of human rights of LGBT persons, they will give preference to majoritarian views and majoritarian interest of protecting families — that’s what we have been told and so we will remain criminals,” Gitari said.

After Friday’s ruling, members of Kenya’s LGBT community were clearly distraught. Outside the courts, members of various Christian churches congregated, singing songs of jubilation. One of them is Pastor Katy Kageni of the Sozo Church.

“So it’s not a sin worse than the other sin, but the problem is what it does to the family,” Kageni said.

“Our fight is for the family unit. I am a mother of four, I came to this court, I told God, ‘don’t let us get into a position where I have to explain to my children why a man is holding a man.’ If he does it in the bedroom, that’s up to them, and between them and God — but not in public.

For the LGBT community, decriminalization of gay sex would provide guaranteed freedoms that they once only dreamed of, Gitari said.

He said because of today’s ruling, many of Kenya’s LGBT community would remain in the closet, and some will be too ashamed to access basic services, like health care.

Countries such as South Africa, Angola, Mozambique, Sao Tome, and Principe and Cape Verde have struck down anti-homosexuality laws from their constitutions through court rulings or changes in their laws.

In Europe, homosexuality is politics & means to get votes, as time has proved: politicans have defyed God & want to force the rest of the world to do so!

Developed world is naive to a point of no return; migration has made Europe the best place for polygamy, yet europeans pretend they don't see it, this way of life is not in their society, yet their taxes/system pay family/social services for these families!

Imposint homosexuality on us makes Europeans more naive, than anything else!

In other words Akot, the stupidity of Post Modernism has opened a gateway for Muslims to invade Europe and takeover.
Report to administrator
12