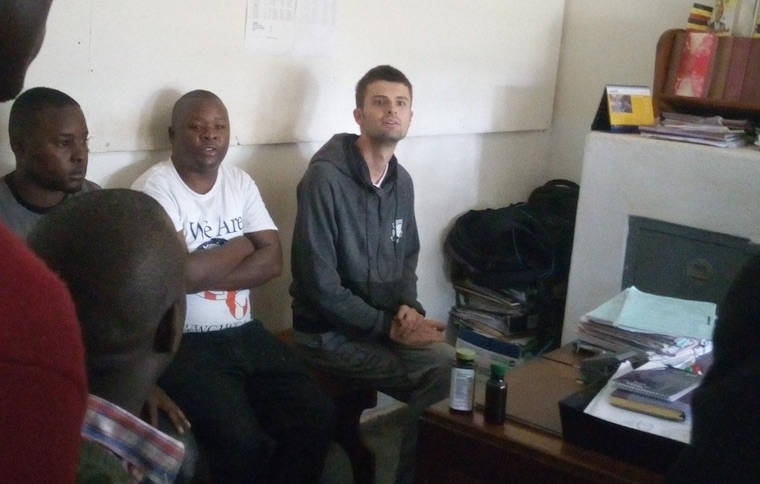 Police in Fort Portal have arrested a British national, William Sam Little, who has been promoting the use of miracle mineral solution (MMS) as a cure for cancer, HIV/Aids, malaria and other illnesses.

According to the Rwenzori West police spokesperson, Lydia Tumushabe, there are allegations that Little has been giving this liquid solution whose ingredients are unknown but include Chloride Dioxide to unsuspecting victims in districts of Kabarole, Kasese and Kyenjojo.

Tumushabe said that Little was arrested on Wednesday from Kitembe village in Karambi sub-county, Kabarole district with two other Ugandans Tadeo Samula, and Albert Samuel, aged 27, all residents of Maguru in Fort Portal.

For the previous two weeks, British media has been awash with reports that indicate how Little was in Uganda and promoting an illegal solution as a cure. It was also indicated that the solution is dangerous and that Little has no background in medicine.

While being interrogated at Fort Portal police station, Little was also found to be in possession of marijuana and other concoctions of solutions that he said are for making MMS.

However, when the Kabarole district officer in charge of criminal investigations, Godliver Twinomugisha, asked him about the source of marijuana, Little said that he had picked it from Pavilion bar in Fort Portal town but didn’t provide details.

Police also retrieved bird feathers and pieces of clothes form Little’s bag. Little insisted that whatever he is doing in Uganda is charity and is on a mission to purify Ugandan water so that it can start healing people of any illnesses.

He also said that he is building an orphanage in Gweri parish in Karambi sub-county though he could not tell who had authorized him and also failed to produce the plan for the orphanage. Tumushabe says that police have already launched investigations into Little’s project.

“We strongly appeal to the general public and in particular the Christian community to be careful and report and report any suspicious activities in line with above and urge the victims to come up and assist police in investigations,” reads part of the press release by Tumushabe on the matter.

If we can trail Hon. Kyagulanyi, Col. KB et al 24 hours, how can't the so called security apparatus of the regime spread all over not detect such an activity.

And you hear M7 boasting of how no terrorist can survive in Uganda!!! A Briton enters Uganda, establishes a base in Kabarole and starts administering concoctions to patients in broad day light!
Report to administrator
+1 #2 Lakwena 2019-05-24 09:52
It is a pity for Little Sam to be locked up in the middle of nowhere of the Rwenzori Region! it is another pity, Little Sam turned out not to be the Good Samaritan after all.

Unless each one of us become the master/expert of our health, the so call experts and their quack counterparts, will exploit our ignorance bout ourselves.

Because of our ignorance about ourselves, in the eyes of these experts and quacks; we each look like a million dollar. So they will borrow millions of dollars in our names, and build "Specialized Hospitals" in order suck more of our blood.

They will sell to us all the expired drugs and all sorts of chemical reagents, which will trigger e.g. long-term non communicable diseases (NCD), so that we become dependent on their fake drugs.
Report to administrator
+1 #3 Lakwena 2019-05-24 10:00
In other words, even at spiritual level; it is stupid to know everything outside of ourselves, but remain ignorant about the self, which we live and die with.
Report to administrator
0 #4 Karemire 2019-05-24 12:20
Quoting Kelly:

But surely, does it need to be the British media to alert us of such a heinous activity (suspected crime for now)?

If we can trail Hon. Kyagulanyi, Col. KB et al 24 hours, how can't the so called security apparatus of the regime spread all over not detect such an activity.

And you hear M7 boasting of how no terrorist can survive in Uganda!!! A Briton enters Uganda, establishes a base in Kabarole and starts administering concoctions to patients in broad day light!

Security = Regime Protection, and nothing else besides.
Report to administrator
0 #5 rubangakene 2019-05-24 20:08
What I want to know is; how do these people manage to pass through immigration control at Entebbe or any other routes; is there a dedicated team that seriously monitor and grill some of these "goons" at point of entry their intentions of visiting Uganda?

How many dubious people have actually been denied entry into Uganda and what actions have been taken to deter their local "sponsors".

This parliament of 650 Mp...s just sit and fart in the house and assume that everything is hunky - dory so long as they continue to fatten.
Report to administrator
0 #6 kabayekka 2019-05-24 20:11
Well then the best this government can do is to deport this young investor as they did for the dodgy MTN management.

Unfortunately what they do will remain on in this country as planting a mustard seed in the good soil.
Report to administrator