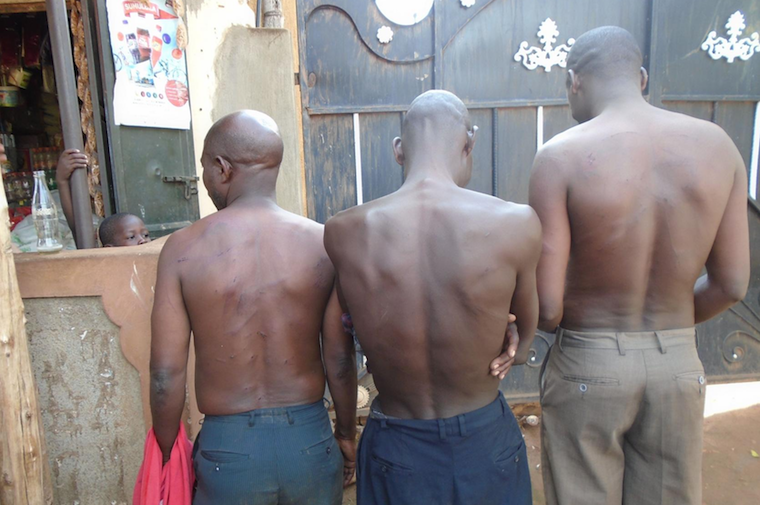 Some of the beaten residents show the bruises

At least nine residents and two Uganda People’s Defense Forces (UPDF) soldiers have been injured in clashes at Mabuye village in Luweero district.

It is alleged that the clashes started after the residents mistook the UPDF soldiers for cattle thieves and attacked the soldiers with machetes. The soldiers attached to Nakasongola army barracks were allegedly on military training in the nearby hills.

The two UPDF men injured are not yet identified, but have reportedly been rushed to Nakasongola army hospital for treatment. Kuteesa, the LC I chairperson of Mabuye in Kamira sub-county explains that he received a phone call from a resident informing him that there were armed men loitering in the village at around midnight and could be planning to steal their cattle.

Kuteesa explains that he mobilized the residents who turned up to look for the men and arrested them only to find out that they are UPDF soldiers. He adds that the UPDF soldiers disarmed and undressed the residents before they were thoroughly beaten and many left nursing injuries. Kuteesa says they pleaded to the soldiers to let them go but in vain.

Steven Katuluba, another resident said they sustained severe injuries on the chest, head and other body parts. Edward Ssenyonyi, the LC III chairperson of Kamira sub-county has criticized the UPDF men for conducting military training in the villages without notifying local leaders.

Ssenyonyi has asked UPDF to transfer the injured to the hospital for treatment since they are the ones who erred leading to the scuffle.

Neither Luweeero district police commander Rebecca Ayeta nor Savannah regional police commander Bosco Otim were willing to comment on the incident saying they were not aware of the training being conducted in the area.

Maj Isaac Oware, the spokesperson of Nakasongola army barracks confirmed the incident saying the soldiers acted in self defence after they were attacked by armed residents. Oware insists that the local leaders were notified about the training and this is normal procedure but the residents only wanted to provoke the soldiers.

He advised those injured to seek medical treatment because as UPDF they have no plan to do so since the residents are the ones who attacked them leaving some of their officers also injured.

It would be unwise for that situation to escalate. Luweero has the potential to be "trianglized" yet again.
Report to administrator
+4 #3 Odongkara 2019-05-23 12:59
The story in my opinion doesn't add up. How come the UPDF undertakes military training amongst civilian populated areas without alerting the local leaders and police?

I am inclined to believe that the soldiers were out on a looting spree but fortunately the local leadership L 1 was vigilant and alerted his residents to the presence of the cattle thieves in their vicinity.

Why beat up the wanainchi rather than to explain the mix up caused by the UPDF?

And it's very likely the wanainchi are fed up of the cattle armed robbers and this explains the way they reacted to the situation.

The Karamojong are no longer cattle thieves but the UPDF that disarmed them has taken over the role!
Report to administrator
+2 #4 kabayekka 2019-05-23 16:04
Indeed they are dodgy Uganda People's Defence Forces bent on causing havoc to innocent civilians that volunteer to secure their villages during the night.

The name UPDF should be revoked and the rightful name of Uganda Army imposed on these aggressors of innocent civilians.
Report to administrator
+2 #5 Kelly 2019-05-23 19:34
“Maj Isaac Oware, the spokesperson of Nakasongola army barracks confirmed the incident saying the soldiers acted in self defence”.

Maj Oware, be careful what you wish for. To what extent can someone act in self-defense? Maim? Kill? Clobber? Torture…?

So was it only the two soldiers who were on military training? What kind of training were they undergoing, only two of them?

Anyway, I know such a training can NEVER take place in such vast and sparsely populated areas like Rushere, Kazo, Kiruhura but in Nakasongola, Akokoro, Obalang, Otuke, Madi Opei where if stray bullet from the trainee soldier is stopped by a human being (inhabitant) of those areas, it is “their” (inhabitant’s) mistake!!!
Report to administrator
0 #6 Akot 2019-05-23 20:08
Remase, agreed, but,

Only when Ugandans take back their country in UNITY, will they be able to revoke UPDF & rename it as they wish, in the kind of governance they will go for!

Until then, Uganda belongs to Museveni who controls tax money, parliament, court & organises elections that only he will win...!
Report to administrator
+1 #7 Lysol 2019-05-23 20:31
Some of those regime's militias are indeed cattle rustlers.

Many lovestocks from the poors , have been looted by them, due to just pure greeds (sometimes as punishment) and morbid obsession for cattle.
Report to administrator
+1 #8 rubangakene 2019-05-24 20:25
The army should have informed the LCs of the training schedules in their locality. I suppose they were following the law as they know it.

You see this is a regular occurrence; beating up people who they assume are in the wrong without questioning who they are or what they are doing in their domain.

Who is to blame, eh? The whole country is in chaos, a broken system that we Ugandans must get rid off!
Report to administrator