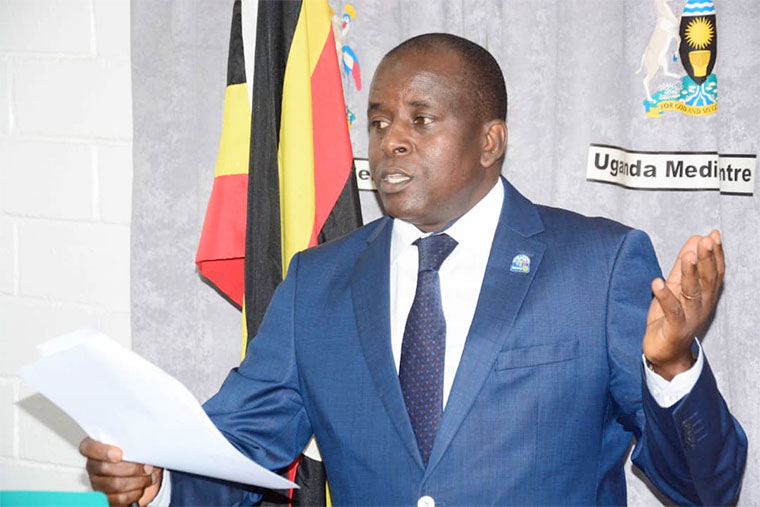 Three days into the nationwide teacher’s strike, government has asked teachers to return to classes, saying there is no money. Today, Wednesday, the state minister for Public Service, David Karubanga, told a news conference at the Uganda Media Centre that although government acknowledges teacher’s demands for salary enhancement but its constrained with funds.

Karubanga said government has already or plans to spend the available money on at least six critical priorities including defence and security, completion of critical oil infrastructure and power stations, revival of the national airline, addressing youth employment and empowerment and construction of irrigation schemes to address climate change.

This financial year 2019/20, he said government will be able to finance phase two of enhancement to a tune of Shs 62.89bn. Of this, Shs 13.8bn and Shs 49bn has been allocated to health and education officers respectively who missed on the first phase of the enhancement.

“So, all public service union leaders are requested to ensure that workers under their jurisdiction continue to be patient and provide services required of them as we deliver Uganda to the middle income status,” he said.

In 2017, President Museveni promised to improve salaries for science teachers, arguing that they were few and likely to move to other countries due to low salaries. This led to a strike from their arts counterparts which saw government drop the “selective” increment but sign a collective bargaining agreement (CBA) with 10 labour unions to enhance salaries of all public workers on June 22, 2018.

The pay target was approved to be implemented in a phased manner over a period of five years starting from FY 2018/19. In the first phase, at least Shs 525bn was provided for nine categories of public servants

According to Karubanga, the second phase which was supposed to be financed in the FY 2019/20 has been deliberated on but affected by other competing “critical” government proprieties.

Karubanga’s request seems to have fallen on deaf ears. The Uganda National Teacher’s Union (UNATU) general secretary, Filbert Baguma, said the union has not resolved to call off the ongoing industrial action.

He said teachers gave government a 90-day in February this year but lapsed without any formal communication from the respective offices.

“We have heard from the media that government is engaging leaders but we have not seen them anywhere at our office. Today, I received a call around 11am from the state minister [Karubanga] informing me that he has sent a letter. However, I left office 10 minutes to 12am without seeing a letter. It is 25 minutes to 1pm and there’s [still] no letter,” Baguma said.

“Let government sack these people so that we know that it is reacting in a way that the officers are not doing their work.”

While at the Uganda Media Centre, Karubanga had informed this reporter that letters detailing government’s position had been issued to union leaders yesterday [Tuesday].

It is here that Baguma said: “If it was sent yesterday, the distance between Public Service and Unatu headquarters on Bombo road is not even five kilometres. Should we assume that yesterday and today the letter is on the way?”

Karubanga said government now intends to invite labour unions leaders to review the first agreement and find means of signing a new agreement. According to the first CBA seen by The Observer, “the agreement may be reviewed through mutual agreement by either party giving the other a three months’ notice.”

For teachers who intend to abscond work starting Monday next week, the state minister said the available public service laws will deal will decisively with their “defiance.” Baguma had no kind words either.

“What has he [Karubanga] been waiting for to address our issues yet we have evidence that he received our letters? When we signed the CBA, he was in the boardroom. If government didn’t have money, where was he to communicate since the budget cycle started [in October 2018]?”

On dealing with defiant teachers legally, Baguma asked Karuhanga that: “Was he having his head when he was sitting and negotiating with us? Was he using his home-based laws or national laws? So, if he thinks he is going to evoke the laws, let him do.”

For primary school head teachers and graduate arts teachers in U4 scale, they agreed to raise their salary from the current Shs 919,000 to Shs 1.7m while graduate science teachers in the same scale would jump from Shs 1.2m to Shs 2.2m.

Principals and heads of diploma awarding institutions would be the highest paid at Shs 3.1m up from Shs 2.3m. By May 15, Karubanga said at least 79 local governments had not yet remitted April salaries for some officers.

12
+1 #11 kabayekka 2019-05-23 16:12
Kelly you have made a good point. If these professionals give up their demands and turn around and continue to squeeze every Uganda Shilling they can from the parents, the public will understand well what type of servants of the people they are.

It seems some people deserve what often comes to them! It is the same with the Uganda medical fraternity.
Report to administrator
0 #12 Zaitun 2019-05-23 18:37
Simply go ahead with the strike, we are behind you. If these guys think Uganda is where they can loot so easily, this tstrike offers a reason why Ugandans should all come out and support our ill-paid teacher, and then get rid of these cattle rustlers.

Yes, the play ground is not set for us to start country wide strikes that will eventually rid the country of these yellow goons.
Report to administrator
0 #13 Odongkara 2019-05-23 18:58
I really wonder if so called ministers like the Karuhangas think that Ugandans are so stupid that they can utter any rubbish and the citizens will believe their crap.

Sorry bwana minister we are not all that gullible the way you think. For any utterances you make you just is exposing your government decietfulness.

One think we know is that the country's money and wealth now belongs to one person, Museveni. He spends in trillions just for going around telling the same stories told over a period of 30 years.

He dishes what has become to be called the infamous brown envelopes at will. He calls NRM caucuses with the sole aim to bribe, but nature can't be bypassed, you will get old and leave alone.

Now this idiot of Karuhanga where does Uganda Airlines, climate change conflict with the agreed teachers salary enhancement?
Report to administrator
+1 #14 Odongkara 2019-05-23 18:59
Karuhanga you are a Sucking idiot! Teachers please remain firm the parents are behind you.

The Sudan revolution came through the demand for bread but Uganda's case will be through education because man doesn't live on bread alone.
Report to administrator
0 #15 Isaac 2019-05-23 20:44
If you look clearly, teachers demand only about 22b, yet over 200b has been spent on training people that you can earn without any work but just loyalty to the party.

I wish teachers demand something bigger and stick to that.

Firing you from work won't kill, it's you silence when your salary can't even meet 1/2 of your thoroughly revised little budget.
Good spirit in your strike.
Report to administrator
0 #16 kabayekka 2019-05-24 12:43
Really with these demands for more money, can these teaching professionals convince the public that free Primary and Senior Education in this country will continue to be free especially for the students of very poor parents if they get a pay rise?
Report to administrator
12