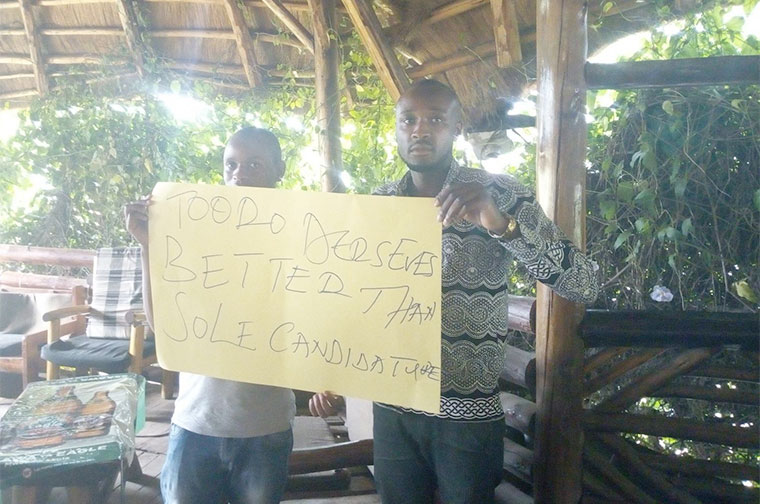 Police in Fort Portal blocked a demonstration by a group of Tooro youth against a resolution backing President Yoweri Kaguta Museveni as NRM’s sole presidential candidate in forth coming elections.

On May 9, leaders in the Tooro sub-region met Museveni at Kalya courts in Fort Portal and they unanimously backed him as the National Resistance Movement (NRM’s) sole presidential candidate in 2021 polls.

However, this did not go down well with some of the youth in the sub-region. They, on May 13, wrote to the inspector general of police (IGP) Martins Okoth Ochola, requesting for security clearance to hold a peaceful demonstration against the resolution in Fort Portal town.

Thomas Kakuru, one of the mobilizers of the demonstration, said they were about 100 in number and had planned to hold the demonstration on Monday, May 20. However, they did not get any response to the letter. But by the time they took to the streets, police had already deployed and they were warned that if they attempted to demonstrate, they would all be arrested.

According to the Kabarole district police commander (DPC), Jamal Kanyesigye, they blocked the demonstration because they hadn’t been informed about it and deemed it illegal.

Kakuru said that since they have already written to IGP Ochola and did not get a response, they are now giving police up to Thursday this week to respond to their request else they will go to court for legal redress. Holding protests in the country has lately become a contentious issue - with police often accused of illegally blocking demonstrations using the Public Order Management Act. (POMA).

+4 #1 Akot 2019-05-21 14:53
Come on youths, the country, the future belong to you & you MUST UNITE, from East to West, South to North & block Museveni! Your UNITY will mean NO to Museveni, tribal leaders, elties who turn blind eyes-deaf ears to destruction of your future!

Every change that has taken place elsewhere was sparked by; youths, poor working tax payers, youth who want education, the jobless who saw that if they didn't UNITE & come out in FULL, those who get hands outs from demon dictors will continue to do so while the bulk of population go poor, sick without healthcare, produce food with 18th century farm tools...& die of old age at 45!

Ugandan youths have Bobi Wine to lead them to change & only their UNITY around him will ensure they have chance to put in place the kind of governance they want! This is a chance that Algerians, Sudanese don't have, yet they came out in UNITY!
Report to administrator
+4 #2 Jama 2019-05-21 16:08
Why waste time writing to the police which is a branch of the NRm.
Report to administrator
0 #3 Fuller 2019-05-21 17:39
I have checked records for 1980 (and even spoken with those who were around).

Unless something was shredded, there is nothing to indicate that H.E. Yoseri Tibuhaburwa Buzariranwa Rutabasirwa-Kayibanda ever wrote to Uganda Police before he waged guerilla warfare in Luwero.

Tooro youth seem to be doing non-violent and totally needed civil disobedience that requires no permission from anybody.
Report to administrator
0 #4 Lakwena 2019-05-21 18:35
"The problem of Africa is, leaders refusing to leave power" (fighting only for themselves and families (looting).

Either because they have committed serious crimes against humanity, looted the country's coffers dry; therefore fear the humiliation of Jail term, or so incompetent and cannot feed, house transport and dress their families when out of State House (freeloading).

In other words, they are pests and/or parasites (Kawukumi) under the skin of their countrymen, women and children.
Report to administrator
0 #5 Odongkara 2019-05-21 20:43
The idiot Kabarole district police commander, Jamal Kanyesigye said, they blocked the demonstration because they hadn’t been informed about it and deemed it illegal.

Just do what you are told what to do regardless of what the law says and you will feel the pinch of your actions sooner or later.

Now that Museveni will never make you any richer by your religiously following what he tells you to do.

What he knows and wants is to remain in power until death do him the parting. And the day he is out of power there begins the day of reckoning. Amen!
Report to administrator
0 #6 Samy 2019-05-22 12:53
Uganda's problems are more, not just leaders but the voters who even after knowing this continue voting for those very leaders.

This man just needs to be impeached.

But who can do that in Uganda? because all people around him are target workers. "For God and my stomach" but time is there for everything.
Report to administrator