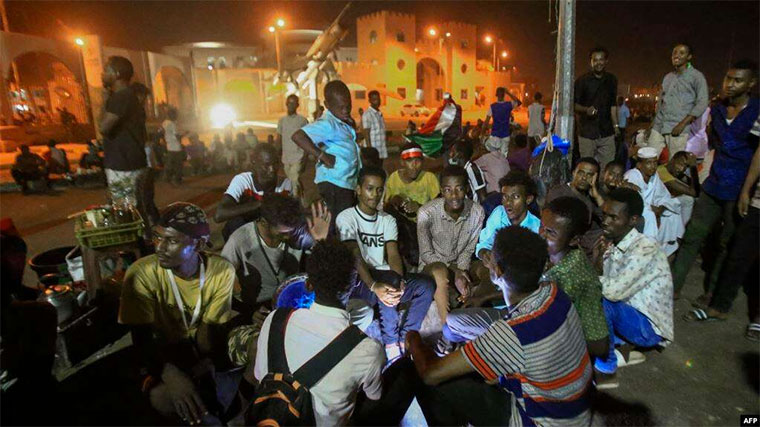 Sudanese protesters gather near military headquarters in the capital Khartoum, May 19, 2019, during an ongoing sit-in demanding a civilian-led government

Sudan's ruling military council said it had restarted talks late on Sunday with an alliance of protest and opposition groups that is pushing for a civilian-led transition to democracy.

The Transitional Military Council (TMC) had suspended the talks late on Wednesday after two outbreaks of violence around protest sites in the capital Khartoum.

Street protests and a sit-in outside the Defense ministry have continued since the army ousted and arrested former President Omar al-Bashir on April 11.

Demonstrators are calling for a rapid transition to civilian rule, and demanding justice over the deaths of dozens of people killed since protests triggered by an economic crisis and decades of repressive rule spread across Sudan from December 19.

The TMC and the Declaration of Freedom and Change Forces (DFCF) have agreed on a three-year transition before elections, but have been deadlocked over whether civilians or the military would control a sovereign council that would hold ultimate power.

The Sudanese Professionals Association (SPA), which spearheaded protests against Bashir and heads the DFCF, has accused the TMC of dragging its feet in the talks and has sought to increase pressure on the council by expanding protests.

It also held the TMC responsible for street violence over the past week in which several protesters were killed and dozens wounded. The council accused protesters of not respecting an understanding on de-escalation while talks were under way.

0 #1 Akot 2019-05-20 15:09
Sudanese must know they have come so far & they cannot turn back & MUST remain calm & not give reason to violence! After so much suffering, waiting, it's time to maintain stand in calm until the people's demands are meat!

The country belongs to Sudanese & they MUST remain UNITED & in calm/peace!

Yet, it's time to ask; where is that just 1 leadership the UNITED people of Sudand needs & yesterday?

Sudanese need civilian rule, yet they don't have the leadership to help them concretise the movement, why, especially as the people so need leadership to finally start living?

Don't Sudanese see how Ugandans are slaves of a migrant simply because they don't have alternative to the migrant?

Sudanese will be in turmoil as long as the UNITED people don't have the leadership to help conclude & have a start & stop those demons hanging on to power!
Report to administrator