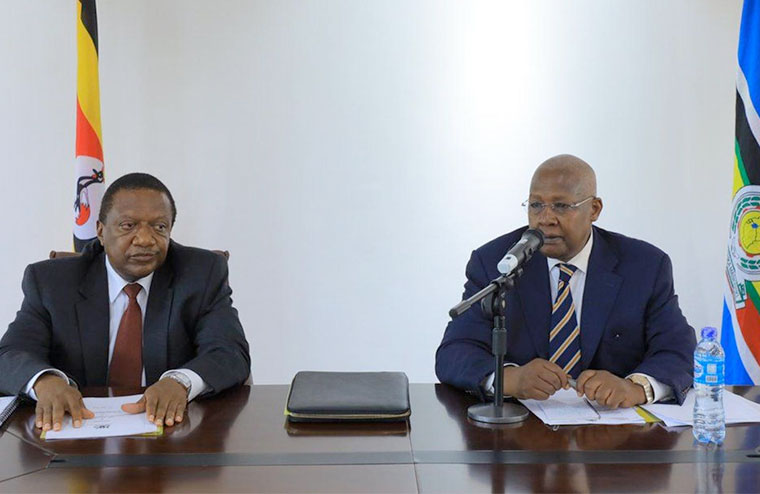 Uganda Foreign Affairs minister Sam Kutesa has today told heads of missions accredited to Uganda that Rwandan security operatives have been entering the country without permission, a move that could have put the security of citizens at risk.

“A number of Rwandan security operatives have been entering Uganda without following laid down procedures governing the entry of security personnel into the country,” Kutesa told diplomatic corps in a meeting held today. He, however, added that a number of them were apprehended and deported.

Kuteesa explained that Uganda has been a target and victim of terrorist attacks; including assassinations of Moslem sheiks and senior government officials and that the government of Uganda takes seriously its duty and obligation to protect the security of its citizens and its borders.

He warned that “any local or foreign threats will continue to be dealt with decisively whenever and wherever they occur."

Kutesa however assured diplomats that the Ugandan government is convinced that the current hitch in the state bilateral relations between the two neighbour's will be resolved. The address comes after the Rwandan Foreign Affairs Minister Dr Richard Sezibera addressed diplomatic corps accredited to Kigali on April 30, 2019 where he accused Uganda of harassing its citizens and hosting elements hostile to the Rwanda administration.

Rwanda closed its Katuna border in February this year and issued a travel advisory to its citizens not to enter Uganda, a move Kutesa said took Kampala by surprise. On the accusation that Uganda hosts those seeking to overthrow the Kigali administration; Kutesa said: “Uganda cannot allow its territory to be used to threaten the security of a neighbouring country.”

This has been the same position for the Uganda government since February when Rwanda closed its borders with Uganda.

Mr. M7 and Kuteesa are guilty like sin, when it comes to violating International Laws.

between 1980 and 1986, Mr. M7 and Kuteesa recruited and/or conscripted Rwandese refugees who were registered with UNHCR, into the NRA to fight Ugandans (UNLA) their host country.

Recently in the international news apparently the duo received a cash bribe each of US$.500,000 from Mr. Ho, while Kuteesa served as the UN President of UN Security Council.

The Sam kutesa's and the Kagame's are cut from the same cloth.

The mistake that Uganda made was accepting Rwandese as one and placing them in sensitive national and economic positions.

Rwanda never did the same. It makes one wonder if Uganda has been infiltrated and is ran by foreigners.

Uganda will soon belong to Museveni & rwandese who are outsiders in Kagame Rwanda will have their own country, Uganda!

Yet, not even tribal leaders helping Museveni keep Ugandans glued to tribal allegience, see they too, will have no place in that Uganda!
Report to administrator
0 #13 Angered Ugandan 2019-05-18 14:00
Lakwena, you seem to forget that all those instances of support were never publically denied.

When it was controversial to support RPF, no public denials of such support were made. Maybe there was some bragging, maybe some admission, or a failure to publically deny suppprting.

Whether SPLA, even those of Kabila. Uganda doesn't support and deny. By the time public denials are made by not only a minister but the president himself, I don't know what other kind of reassurance is required and whether it would ever be accepted.

Most of us at some point have had neighbours who own dogs that stay barking for nothing all night every night. We just get used and ignore.
Report to administrator
0 #14 Akot 2019-05-18 14:03
Quoting Webz:

The East African brotherliness is only amicably entrenched amongst Uganda, Kenya and Tanzania.

The then real East African Community, Kenya, Tanzania, Uganda, was a people's body that took care of affairs of the 3 sister countries, until Idi Amin came on & everything fell to pieces!

Kenya & Tanzania didn't go along with the way Amin killed/treated Ugandans! This is why the 2 countries took in Ugandans fleeying death, then helped Ugandans in exile to form the National Executive Consultative Council, lead by Chairman E.Rugumayo, to ensure Ugandans had a chance to organise themselve immediately Amin was out!

Today, Ugandans MUST FIRST UNITE to throw Museveni out to be in position to sit down & put in place the governance they want!

It was a gross mistake to allow Rwanda and Burundi into the East African Community.

They are people who are ever full of intrigue. Please, let the two nations be expelt at the earliest. And never allow Sudan to come inside. They seem to be perennial warmongers.

The East African brotherliness is only amicably entrenched amongst Uganda, Kenya and Tanzania.

Mr. Webz, there are no standards in this part of the world to inform your suggestion of expelling Rwanda and Burundi.

The EAC is simply an association of political and economic rivals. Uganda, Rwanda and Burundi are governed by dictators unlike Tanzania and Kenya.

And what is the criteria for admitting a failed war-torn state like South Sudan into the community? The same conditions which caused the collapse of the first East African Community in 1977 do exist today.
Report to administrator
+1 #16 Odongkara 2019-05-18 15:16
Listen to this song of big time lie: Kutesa said: “Uganda cannot allow its territory to be used to threaten the security of a neighbouring country." Kutesa must explain these facts that were aided by the government of Museveni and Kutesa:

1- Rwandese refugees in Uganda were trained in Uganda by Museveni into the RPF army and with Uganda support fought and overthrew the legitimate Rwanda government in 1994.

3- Uganda supported and fought alongside the rebels of the late John Garang of the SPLM/SPLA against the government of Sudan.

With these few examples it's enough to see that the regime in Kampala is run by liars. And given the fact that they are chronic liars the accusations labelled against Uganda by Rwanda are likely to be 99% true!
Report to administrator
12