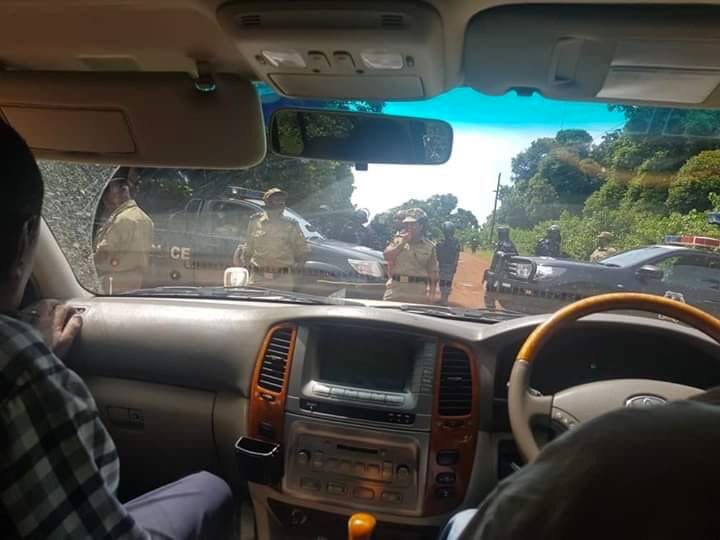 Police has blocked a meeting organised by the Forum for Democratic Change (FDC) party leaders in Kalangala district.

The FDC party leaders were scheduled to meet at Philo Leisure Gardens in Kalangala town council this morning to discuss internal party matters. However, police blocked the meeting pending clearance from the top police leadership in clearance with the Public Order Management Act.

Police also blocked FDC party officials led by their president, Patrick Oboi Amuriat from accessing Kalangala town via Beta, a suburb in Mugoye sub-county. Police stationed two vehicles in the middle of the road next to Bukuzindu solar–thermal Power plant to block the convoy of the FDC officials.

The decision to block the FDC meeting was reached in a meeting between Kalangala resident district commissioner Daniel Kikoola, district internal security officer Kasaana Kaliisa and the police.

The district security committee resolved to block the FDC party officials from boarding the ferry that plies the Kalangala–Masaka route through Bukakata, saying they would stir chaos in the district. Kalangala district FDC chairperson, Robert Munaaba told URN that they were still waiting for clearance.

“We are now here awaiting clearance from the Uganda Police Force although it is unlikely that the meeting will continue since all leaders expected in the meeting have been blocked from reaching Kalangala,” he said.

There is only one access route to Kalangala from Masaka by road. The other way the FDC could reach Kalangala is by use of canoes from Beta where they are blocked. However, police has deployed on the lake to stop the opposition politicians from access the district. Kalangala district police commander, Benon Byamukama, says the FDC leaders have no clearance to hold the rally.

He asked that the leaders have to follow the Public Order Management Act if they are to hold any rally in Kalangala.

+2 #1 WADADA roger 2019-05-15 20:57
Museveni was found to have only 32% of the support yet he is free to move all over the country to campaign in the name of promoting Government services while his opponent Bobi got 22% yet he is not allowed to even go to the market or sing in order to earn a living and on the other hand FDC members who are registered as a political party are always blocked, is this democracy or it is an imitation.