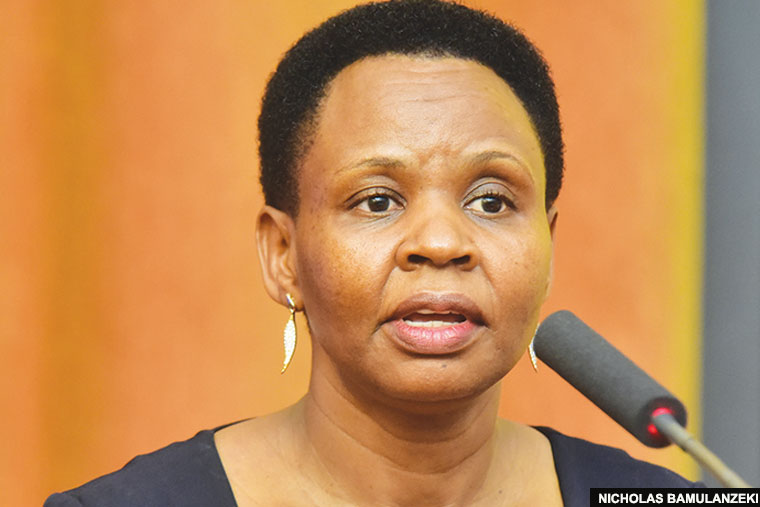 Five months after stepping into the role of head of the rashly formed State House Anti-corruption unit, ACU, Lt Col Edith Nakalema is already feeling the heat of the job, which has put her on a collision path with other graft busting agencies like the inspectorate of government.

While opening the just concluded regional conference of heads of anti-corruption agencies in Commonwealth Africa at the Lake Victoria Serena Golf Resort and Spa in Kigo, Wakiso district recently, President Museveni said the creation of Nakalema’s unit was informed by the infiltration of other anti-graft agencies by corrupt elements.

“When people start complaining about a watchman, then you have to hire another watchman to watch over that watchman and that is why I started and setup units in the President’s office to watch over the IGG,” Museveni said.

Interviewed on the sidelines of the conference, Nakalema said her anti-corruption push and reach is limited by the few staff she has. Asked why she is going after small technocrats in local governments and not big corrupt government officials, she said; “With staff of 22 people, you can’t do much. The work is overwhelming.”

“We have not been able to go for the big people in government because we lack sufficient information to pin them,” she said.

According to Nakalema, her unit on average receives 350 complaints every day mostly from local governments –which explains why she is raiding district offices mostly.

“With a whole [managing director] and 22 of his staff already being prosecuted for causing financial loss at Post Bank you can’t say we are only dealing with the small fish,” she said.

Last June, the President, while delivering the State of the Nation Address, announced he had appointed a three-man team to run the Anti-Corruption Unit in State House. Museveni named former secretary general of the Uganda National Teachers Union (Unatu) James Tweheyo, Martha Asiimwe and Sr Mary Grace Akiror. The president said victims of corruption were not comfortable reporting cases to the IGG, which was a glaring indictment of the ombudsman.

“Report any corruption you come across to this unit. It will comprise Mr James Tweheyo, Ms Martha Asiimwe and Sister Akiror. They will give out their telephone numbers. What happened to the IGG? Why don’t the victims of corruption report those incidents to the office of the IGG? That was the purpose of that office; to protect the public from corrupt officials; to protect the investors against corrupt officials. The IGG should reflect on this. Are her staff credible? Why does the public not trust that institution? We need answers,” Museveni said at Serena hotel.

After the address, the IGG told journalists that she disagreed with the president on his assertion that the agency she heads had failed to deliver on its mandate. She said the president, instead of creating another unit in State House, should inject more money into her agency to be able to recruit more staff to do the work of investigating corruption cases.

“I would rather advise the president to give those funds to us rather than spending it on a unit. The Inspectorate only needs to be reinforced; we need more staff, an improved budget and a forensic laboratory given the nature of our investigations,” Mulyagonja said then.

Mr Museveni would later that year, on September 6, 2018, in an address to the nation delivered at State House Entebbe, announce that he had appointed Lt Col Edith Nakalema to head the Anti-Corruption Unit (ACU).

Tweheyo’s team was handed the task of manning the resident district commissioners (RDCs) secretariat. The ACU has camped in different parts of the country, arresting civil servants and other public officials accused of engaging in corruption. Lt Col Nakalema herself moved to dispute this view, saying her unit would work with all the other agencies.

“This very assignment will be very possible with passion from the public. Everyone is tired of corruption and I am among those Ugandans that hate corruption. And so, I am determined to work with the Anti-corruption agencies, in particular the IGG, the DPP, the Auditor General, the Financial Intelligence Authority, PPDA, director Criminal Investigations,” she said at the time of taking office.

Recently, ACU received a complaint about alleged corruption at the inspectorate of government, which the unit said it would inquire into. Justice Mulyagonja, the IGG, in  response  said the investigation by ACU was welcome, although she added that her office does not have any staff working illegally.

The IGG also commented on the work of the ACU during the press conference, saying as far she knows, Lt Col Nakalema’s unit does not investigate, but rather she works with the police’s CID and the DPP to carry out that work.

At the end of their weeklong conference, the heads of the anti-corruption agencies in Commonwealth Africa agreed to work together for purposes of facilitating asset recovery.

“When thieves steal from our countries, and mostly from transactions of government, they do not necessarily keep the funds on the continent, what they do is they repatriate funds and take them to places we know to be safe havens and places where we know international finance is known to be very profitable, they invest there,” Justice Irene Mulyagonja said.

“They can invest in assets that are underground or keep the money in banks. So, the challenge of the anti-corruption agencies on this continent is to recover money that is sent out of the jurisdiction from which it has been stolen. It is not a simple process, it requires of us as anti-corruption agencies to work together and find strategies that we can use to demand the return of these monies,” she added.

A case in point that Mulyagonja cited is the Shs 24.7 billion which was stolen from the Katosi road project by businessman Apollo Ssenkeeto who is currently serving a 10-year-jail term.

“In Uganda, we know some monies that have been taken out of the country, one case is of the Shs 24 billion which was stolen from the Katosi road project, we know that part of it was taken to the United States of America; we are trying to trace it and see whether we can recover it,” Mulyagonja said.

The African Union estimates that more than $148 billion is lost by Africa through corrupt government officials. Dr Roger Koranteng, the head of public sector governance at the Commonwealth secretariat, reported that some countries on the continent had made strides in recovering some of their stolen money much as the success rates are still low.

Among the countries that have recovered stolen funds is Nigeria, South Africa, Mauritius, Malawi and Uganda posted the least amount recovered $217,000 (Shs 802.9 million).

“Most of the money stolen in Uganda is not kept as cash but in assets – mainly real estate and, not many of these assets are registered in the names of the public officers who take out the money which makes it difficult for us,” Mulyagonja said.

Otherwise, she would have started with her boss, Mr. M7 himself.
Report to administrator
0 #3 Amooti mugi 2019-05-15 15:44
[quote name="Lakwena"]In other words, Afande Nakalema goes for Mukene because the sharks can bite back.

Otherwise,Cool. Nakalema, I would expect the Bank of Uganda " kings and queens" who featured prominently in the mess at the bank to have been top on her list of cases to deal with....

Soon we shall have another entity created to watch over the activities of ACU which is currently watching over the IGG. So long as Museveni is still the President, entities shall continue to be duplicated
Report to administrator
0 #5 Lakwena 2019-05-16 08:19
Quoting WADADA roger:

Soon we shall have another entity created to watch over the activities of ACU which is currently watching over the IGG. So long as Museveni is still the President, entities shall continue to be duplicated

Wadada, that is the communist way of doing things: In order to have absolute mind control/fear over the citizens, deploy "a spy behind a spy policy". That makes every citizen subconsciously a suspect/guilty by association.

In other words, it enforces (Big Brother watching Syndrome). So that even your own wife and/or children spy on you.

We the public can provide you with a bigger net to "trawl the bigger fish but we can't provide you with the guts and balls" so resign ad let someone with the "grit" to carry out the fishing!
Report to administrator