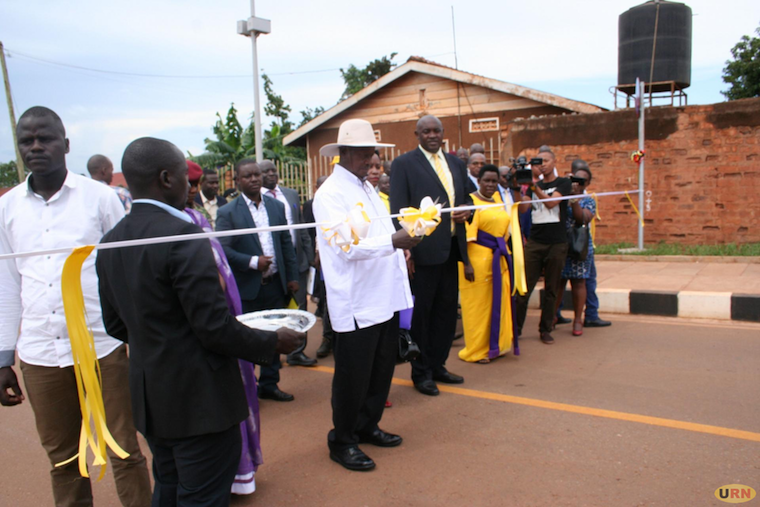 Museveni cuts tape to commission one of the roads

He issued the warning while commissioning 10 roads constructed under USMID in Kahoora division, Hoima municipality on Tuesday.

Museveni noted with concern that he has started receiving reports of some municipalities misusing the funds. He also observed that several beneficiary municipalities had delayed to complete USMID projects because of hiring incompetent contractors.

He called for proper accountability of USMID funds by all beneficiary municipalities across the country, saying whoever messes with the money will be dealt with accordingly. Museveni explained that the NRM government was committed to improving the road infrastructure across the country, adding that a number of major roads have been worked on.

Museveni lashed out at the opposition, who, he says keep on criticizing his National Resistance Movement (NRM) government for not ushering in rapid development in the country, saying development is a gradual process that cannot take place in one day.

"When the NRM came to power, a lot had gone wrong. We have since moved in leaps and bounds, including strengthening our democracy. There is so much freedom now to the point that people insult the president freely on radios and social media." he said.

"I want Ugandans to understand that our limited resources mean we cannot do everything at once. We must prioritize, handling the most pressing issues first, which we have done with electricity, roads, security, schools, hospitals among others."

Persis Namuganza, the Lands, Housing and Urban Development state minister, said improving the outlook of the towns, municipalities and cities across the country is one of the signals that Uganda is driving towards the middle income status. She however, noted that at first they had challenges with some municipalities on the utilization of the project funds. She said some municipalities have been mismanaging or failing to utilize the USMID funds.

Dr Isaac Mutenyo, the coordinator USMID in the ministry of Lands Housing and Urban Development, said the project aims at improving the institutional capacities of municipalities and towns across the country through improving their infrastructure.

He says Hoima was included to benefit from the USMID project due to the anticipated rapid growth of the industries in the region because of the oil discovery. Mutenyo said Hoima will get Shs 50 billion this financial year under the USMID as additional financing that will run up to 2023. Grace Mary Mugasa, mayor Hoima municipality applauded government for improving the road network in most towns in the country.

The roads worked on in Hoima at the tune of Shs 31 billion include Coronation, Wright, Bunyoro-Kitara, Government, Old Tooro, Persy, Republic, Bujumbura, Kwebiiha and Kabalega  - all in Kahoora division.

The project has seen the town well lit, the drainage system improved and traffic lights installed to deal with the ever-increasing traffic. Construction works started in 2013.

-1 #1 WADADA roger 2019-05-15 21:23
It is a pity, about two years ago, Museveni commissioned the Tororo- Mbale- Soroti road constructed by Dott services, a few months down the road, the Manafwa river bridge collapsed, the road cracked and now has to be constructed afresh.

When will he allow his ministers to commission anything? Could this be the reason why many of Museveni's ministers are not known to the public.
Report to administrator