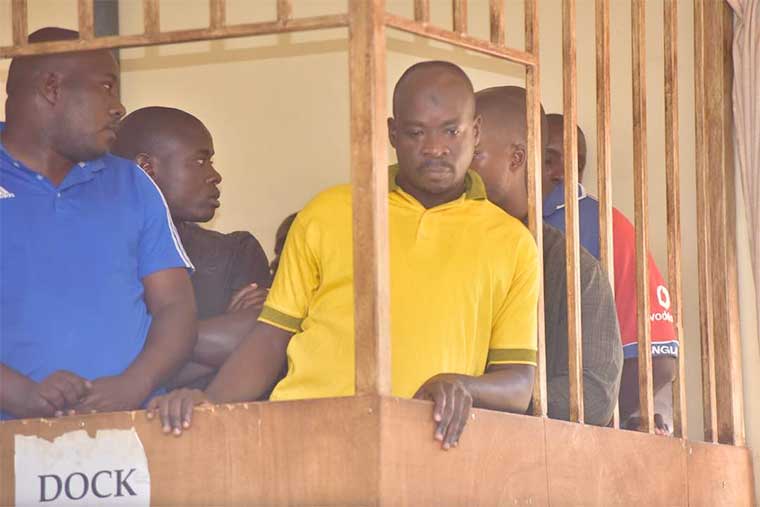 Abdallah Kitatta, the Boda Boda 2010 Association patron and his bodyguard Sowali Ngobi have been sentenced to 8 years, 8 months and six days in prison for illegal possession of firearms by the Army court.

Kitatta and Ngobi were found guilty of illegal possession two with an SMG rifle, two pistols and 30 rounds of ammunition without a valid license contrary to the Fire Arms Act.

According to court records, the guns were recovered from a vehicle, registration number UAK 135B that two were using outside Vine hotel in Wakaliga.

Gutti said court had put in consideration the fact that the convicts had spent over a year and two months on remand, and that the guns had not been used to commit any crime, the reason why the duo has not been handed the maximum 10 year sentence.

Kitatta had asked for a more lenient sentence, arguing that he's a family man with several wives and children and that he has previously worked for the state and police.

Kitatta who is the ruling National Resistance Movement (NRM) party Rubaga Division chairperson often boasted that he was the state and the state was bigger than the law.

He and his notorious Boda Boda 2010 gang were often accused by motorcycle (boda boda) taxi riders of torture, theft, murder during the time when he was in charge of managing the boda boda industry in Kampala city.

When then inspector general of police Gen Kale Kayihura was summoned by court to answer charges of torture against Kizza Besigye supporters, Kitatta threatened to bring disorder in the city if the charges were not immediately dismissed.

Did they break into the armory?
Report to administrator
+2 #4 Kelly 2019-05-14 15:31
"Kitatta had asked for a more lenient sentence, arguing that he's a family man with several wives and children and that he has previously worked for the state and police",

If that were to be the case then Obote and Amin were real saints. What is more than being a president in Uganda if "working for the state and police" gives a license to kill and maim with impunity!!
Report to administrator
0 #5 Lakwena 2019-05-14 18:38
Irresponsible people like Kitatta (regime henchmen and hatchet-men/women), are the ones who act without first thinking of the ripple effects of their actions on their immediate family members, relatives and friends.

In other words, even Mr. M7, now full of himself and wielding absolute power over the lives and deaths of Ugandans; is not bothered that: one day the law, the office and/or the power which he is abusing now, will one day come knocking at the doors of the very family members relatives, tribe and sycophants that he says he is fighting for.

At the end of the day, they will have no one to sympathize with their misery.
Report to administrator
0 #6 Remase 2019-05-14 18:52
"Army court jails Kitatta for 8 years over illegal guns." If Kitatta is jailed for 8 years, how about his boss Gen, Teargas Kale Kayihura?

Mugabe had his time so were Mobutu, Gadafi, Bokasa, Saddam Hussein or indeed Amin and countless others. Kitatta, who imagined himself to be invincible and untouchable comes under the list.

The problem with such people is that history means nothing to them and call the fallen ones "idiots".
Report to administrator
0 #8 Winner 2019-05-14 20:06
I'm glad that this monster is finally behind bars and also hope that the keys get thrown away.

The Uganda government should also be put on trial for getting uncouth fellas like the Kitata's and putting them in positions of absolute unquestionable power!!

Not to knock down boda boda riders and taxi drivers. True, some of them are educated, experienced, and of sound mind.

However, the Kitata types are the ones on the market with our government. It's unfortunate that worthy people have been silenced and others just choose to be indifferent. It's the Kitata type that will destroy the Kitata type. Let's just wait on for the implosion.
Report to administrator