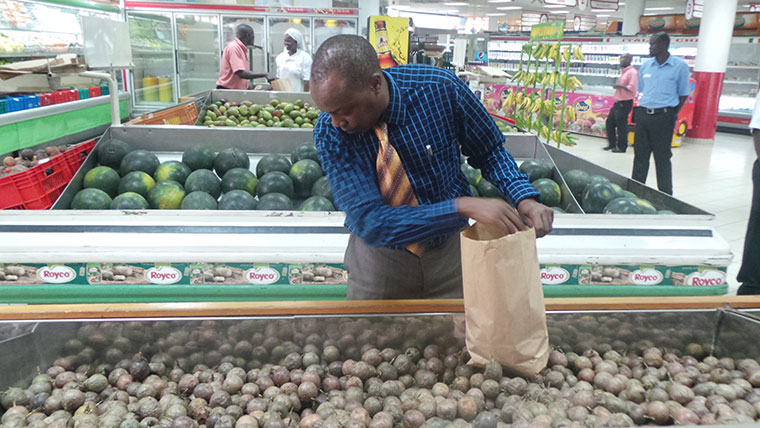 A shopper using a paper bag at a supermarket in Kampala

The Roman Catholic Episcopal Conference in Uganda has abolished the use of plastic polythene bags at Uganda Martyrs Shrine in Namugongo. The move comes less than a month to the annual Uganda Martyrs Day celebrations on June 3.

Bishop Joseph Anthony Zziwa, the Bishop of Kiyinda – Mityana Diocese who is also the chairperson of Uganda Catholic Episcopal Conference says pilgrims trekking to the Martyrs Shrine should conserve the environment by carrying their luggage in paper bags rather than polythene bags.

Bishop Zziwa says the decision has been taken to protect Mother Nature and humanity from the harmful effects of polythene bags. He said food wrapped or packed in kaveera will also not be tolerated at the shrine adding that pilgrims should use paper bags and other biodegradable bags for carrying their belongings to the shrine.

He says that the abolition, which will be scaled up to all other Catholic Shrines and institutions, takes immediate effect this year. He said the Catholic Episcopal conference took the decision to abolish the use of kaveera after consulting National Environment Management Authority (NEMA).

He explains that the move is in line with the World Health Organization (WHO) research findings indicating that pollution overload in the environment is responsible for the increase in cases of non-communicable diseases including cancer, asthma, diabetes and obesity amongst others, rather than genetic disorders.

According to the Bishop, green dustbins will be deployed at the major entrances and exit into Namugongo to collect polythene bags which will accidentally find their way to the shrine.

Dr Tom Okurut, the executive director of NEMA says the campaign is being carried out in partnership with the Catholic Church, VIVO Energy (Shell) and Next Media Group on the occasion of the celebration of Uganda Martyrs Day on June 3rd.

Dr Okurut says Namugongo is a sacred international tourism destination, which must be protected from environmental pollution. He says the campaign provides an opportunity for educating and recruiting pilgrims as ambassadors for the protection of the environment.

According to Dr Okurut, the authority is counting on the ripple effect of pilgrims carrying back the message of the abolition of the use of the kaveera to galvanize implementation of laws outlawing the use of kaveera below 30 microns in the country. He says the campaign is running under the theme: Tuve Ku kaveera.

Joe Kigozi, the chief strategy officer of Next Media Group said the campaign seeks to ride on the Martyrs Day anniversary to achieve behavioural change necessary for the protection of the environment. He said they plan to appeal to the young people to become change makers who will protect the environment for the present and the future generations.

Stephen Chomi, the VIVO Company secretary told journalists from the Catholic Episcopal Conference Center in Nsambya, Kampala that the campaign is in line with the objectives of the multi-national company. Chomi said they committed to doing business under high integrity to do no harm to the environment and humanity. He urged pilgrims to heed to the call of the Church to protect the environment.

Polythene bags are known to take an estimated 400 years to decompose when disposed to the environment. Dr Okurut says the scope of the damage that kaveera has done to the environment is unimaginable adding that communities should be more concerned now that there is a global consensus on the abolition of the use of kaveera.