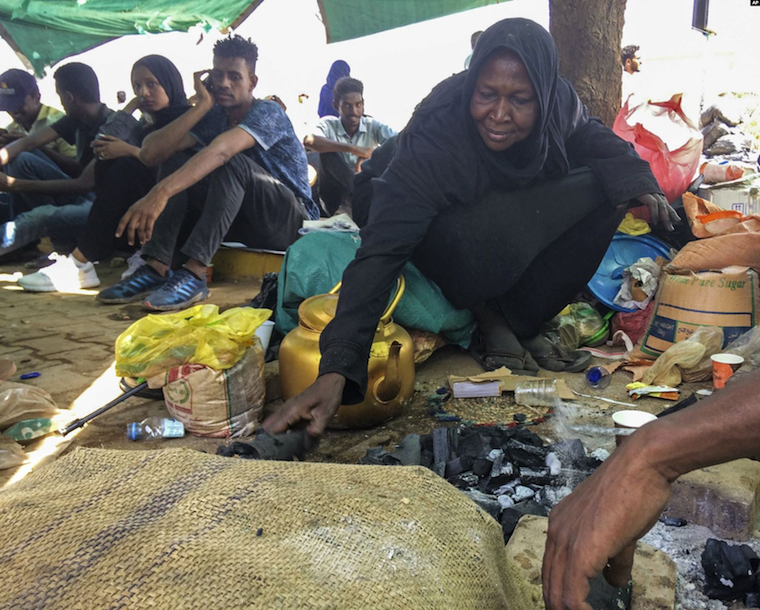 A woman prepares tea for protesters near the military headquarters

Protesters in Khartoum are continuing to demand the resignation of President Omar al-Bashir, staging a sit-in Tuesday outside army headquarters, where heavy gunfire was heard.

Reported attempts by government security forces to break up the crowds led to the intervention by soldiers to protect the demonstrators, according to eyewitnesses.

Police forces issued a communique saying they will never attack protesters. Thousands of people are taking part in the sit-in, Mohiedeen told VOA.

"An eyewitness has noticed that riot police today did not attack people, so only security forces and student militias are attacking protesters," Mohiedeen added.

While official Sudanese television aired pictures and video of army headquarters appearing to be quiet and devoid of protesters, witnesses said the video and photos are old and do not reflect what is happening in real time. The Sudanese military headquarters are open to the protesters, who are now camping on the premises.

"They are camping inside and they are protecting the bridges and the main streets leading to the army headquarters. They (the soldiers) are protecting (people) from security (forces)," Mohiedeen told VOA.

"No one is certain about where he (Bashir) is, but yesterday he had a meeting with NCP and they issued a communique at 9:30 p.m., and said that they would sustain the security in the country," Mohiedeen said.

Sudanese citizens on social media are reporting that Sudanese army forces are standing with the protesters.

Two protesters, one government soldier and one security officer were killed Tuesday morning, according to eyewitnesses, while dozens of people were injured.

"From 4 p.m. to midnight every day, the protests are getting bigger because people from the other states come to join the sit-in whenever the army is protecting the protesters," Mohiedeen told VOA.

Protesters have been responding to calls by the Sudanese Professional Association to take part in the sit-in and to continue the protests outside army headquarters but "there is no real leader," Mohiedeen said.

The protests began Dec. 19 over high prices for bread and fuel, and have since morphed into calls for President Bashir to step down after 30 years in power.

"Women have been very active. They have been the fuel of this revolution. They participated in planning, they have been actively protesting, facing the brutal attacks from the government," Sudanese American citizen Fatimah Haron told South Sudan in Focus while attending a Sudan protest in New York over the weekend.

Haron says women have become the leaders of their families because in the past, they have been looked down upon. "So for a woman to go out, it's a big thing and they have no fear."

Sudanese American Mohassi Mohammed organizes Sudan protests around America. "They (women) are always at the top and they always support Sudan. I am really proud," Mohammed told South Sudan in Focus.

"Women in Sudan, through history, they played a big role through the revolutions, and this one is a big concern for the whole country because this is a dictatorship regime. They treated women brutally, they tortured women," Sudanese activist Amir Zahir told South Sudan in Focus.

Sudanese traders in Juba say they stand in solidarity with their brothers and sisters back home. Trader Isim Asam Abdallah said his brother was abducted in 1999 by Bashir's government and has never been released.

"I support with all my power the change in Sudan because change must be now, at this time on these days. (We) must take al-Bashir out," Abdallah told South Sudan in Focus.

Juba trader Abdallah Haman said he was born and raised during Bashir's regime, and many people have been killed in Sudan during that time.

"The Sudanese ministry came to such a conclusion: They want to just get rid of Mr. al-Bashir after 30 years of failed politics and dividing the south of Sudan. So many factors have generated the slogan ‘Just fall, that's all,' " political analyst Nabil Nigm in Cairo told VOA.

+1 #1 Lakwena 2019-04-11 07:41
Just like the Algerians and Sudanese are doing; when will Ugandans join the Pan African mass Protest against dictators like, Mr. M7 and show him the exit of State House?

Mr. M7 now thinks our State House is his domicile and a birthright to personalize. E.g. he is now demanding for more money for personal security.

Mr. Mr must be reminded that; whether he likes it or not, destruction comes to everything that exits. The more he tries to protect himself, at the expense of the rest of Ugandans, the more tragic will be is end.

In other words, nature severely punishes selfishness.
Report to administrator
0 #2 PaLugore 2019-04-11 15:40
Only one thug, Museveni is remaining.
Report to administrator
0 #3 Mubiru 2019-04-12 17:50
I reiterate the Sudanese protesters could only "brave" the streets to publically exhibit their anger against the dictatorship simply because SUDAN, proved that there is at least some element of civilization in the country which is non-existent in 99.5% of African and other third world countries.

Civilization in this context means that no single demonstrator was tear gassed or killed in Sudan as have been the cases in UGANDA.

Can you imagine that troops with all types of weapons predominantly jam the streets and other voting areas just because peaceful Ugandans are going to cast their votes? it depicts false and distorted impression that Uganda is at war on polling day which even deters many voters to vote to save their lives.

It only helps the regime "to win" votes and prolong dictatorship. Before people fatally urge UGANDANS to follow Sudanese demonstrators who have removed the dictator you must also appreciate that Ugandans are not idiots to commit suicide.
Report to administrator