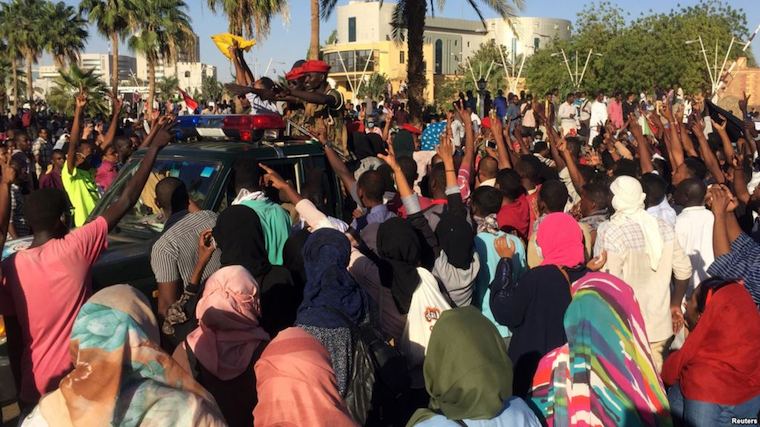 Sudanese protestors outside the army headquarters

In the Sudan, elements of the military moved to protect demonstrators during deadly clashes in Khartoum between security forces and protesters, witnesses say.

Soldiers tried to chase away pick-up trucks firing tear gas, on the second night of a sit-in protest calling for President Omar Hassan al-Bashir to resign. But officials in Kampala are confident that such a people march on government installations such as an army headquarter and State House cannot happen.

Interviewed yesterday, government spokesperson and the chief executive officer of the Uganda Media Center, Ofwono Opondo, described as simple minds those who argue that given the proximity, Ugandans might take cue from Sudan and try to end President Museveni’s 33-year firm grip on power through protests.

“There are no two similar conditions for two countries. A number of opposition leaders and the media since 2011 have been saying what happened in North Africa would happen here but you have never succeeded in mobilizing the people because the situation [in Uganda] is very different in a positive sense. You need to read about the internal ingredients of governance within any of these countries where such uprisings are happening,” Opondo said.

Asked whether government is following events in Khartoum keenly, Opondo said, “We don’t follow what is happening in the Sudan because it’s very close home but because we follow events from around the world. Uganda is not Sudan and this is not the first time in the world that there is an appraising. There was a US-instigated upraising in Libya against Muammar Gaddafi; there were uprisings in Tunisia and Egypt that toppled long-serving presidents Ben Ali and Hosni Mubarak and very recently a military-instigated coup against Robert Mugabe.”

“The simple mind might conclude that the president is touring military barracks for assurance from the military but they forget that the president’s program is made three to six months in advance. But even if it was for getting assurances from the military, what will he do with the population because in all those countries, it’s the population that is rising up,” Opondo said.

After Teodoro Obiang Mbasoggo of Equatorial Guinea who has reigned for 40 years and Paul Biya of Cameroon for 37 years, Museveni is the third longest- reigning president in Africa followed by Bashir.

In the Sudan, elements of the military moved to protect demonstrators during deadly clashes in Khartoum between security forces and protesters. Protesters sought shelter in a navy facility, a witness said, as tension among the armed forces was laid bare. Seven protesters have been killed since Saturday, officials say.

Bashir, who has been in power for 30 years, has so far rejected demands to make way for a transitional government.

What happened on Sunday night?

One protester told the BBC’s Newsday programme that a number of pick-up trucks arrived and began firing tear gas and live ammunition at the thousands of sit-in protesters in the Sudanese capital. She said the military was at first neutral but then tried to chase the security forces away.

It is unclear who the security forces were but BBC Africa editor Fergal Keane says reports indicate they included agents from the powerful National Intelligence and Security Service (NISS). The eyewitness said the security forces returned for a second attack and people then ran towards a navy facility to seek shelter from the prolonged firing.

Ali Ibrahim, of the Sudanese Professionals Association (SPA), which has organised the protest, told EFE news agency that military units had fired into the air to prevent security forces from dispersing the sit-in.

The sit-in has been taking place outside the army HQ and AFP news agency quotes witnesses as saying the army has now deployed troops around the building and is setting up barricades in nearby streets. The army’s intentions surrounding the protest remain unclear.

Information minister Hassan Ismail said the protesters in front of the HQ had been “cleared completely”.

The Sudanese state has numerous armed groups and there are signs of tensions between them. The demonstrators accuse the NISS and a militia supporting President Bashir of trying to drive them away.

The militia is made up of former members of the Janjaweed, the fighters accused of carrying out many atrocities in Darfur region. Over the past 48 hours, several protesters have said members of the Sudanese Armed Forces have protected them.

However, many Sudanese still distrust the armed forces, because of their role in keeping President Bashir in power and their conduct in the country’s succession of civil wars. Some analysts believe that mid-ranking army officers are sympathetic to the protesters, with the top brass more likely to be loyal to the president. But the position of all the armed groups is now one of the key questions in Sudan.

How did this protest begin?

It started on Friday last week when protesters descended on the zone outside the HQ to call for the removal of Bashir and his government. It was the biggest protest against the president since unrest began in December and marked the 34th anniversary of the coup that overthrew the regime of former President Jaafar Nimeiri.

The demonstrators appear to be hoping for an internal coup, pleading with the army command to remove Bashir and open the way for a transitional government. Since the unrest began, Human Rights Watch says protest-related violence has killed 51 people, although officials put the figure at 32, AFP reports.

Why are people protesting?

The protests were originally sparked by a hike in the cost of living but demonstrators are now calling for the president to go. Sudan’s economy has long been strained since the US-imposed sanctions more than 20 years ago, accusing Khartoum of sponsoring terror groups.

In December, the government announced the price of fuel and bread would rise. In the year leading up to this, inflation had risen while the Sudanese pound fell rapidly in value. Bashir’s rule has been blighted by accusations of human rights abuses.

In 2009 and 2010, the International Criminal Court (ICC) charged him with counts of genocide, war crimes and crimes against humanity. A warrant for his arrest was later issued. In February, it looked as though he might give in to protests and step down, but instead Bashir declared a state of national emergency. He says the protesters have legitimate grievances but should only replace him through elections.

Who are the demonstrators?

The Sudanese Professional Association - a collaboration of health workers and lawyers - has been organising the protests. Doctors have emerged as a leading force and as a result are being targeted by the authorities.

It is estimated that up to two thirds of the protesters are women, who say they are demonstrating against Sudan’s sexist and patriarchal society.  Previous attempts to break up the crowds have also led to reports of soldiers intervening to protect protesters from NISS agents.

There have been international calls urging the government to refrain from using force against civilians. President Bashir has called for talks to end the crisis. The country’s interior minister said on Monday that seven protesters had been killed and 15 injured, while 42 members of the security forces had been injured.

He added that almost 2,500 people had been arrested. Representatives of the protesters say they are seeking talks with the army regarding the formation of a transitional government. Omar el-Digeir, a senior protest member, told AFP news agency the group was seeking a path “that represents the wish of the revolution”.

Monday marked the third night of the sit-in, despite security force efforts to disperse the group. United Nations Secretary-General António Guterres has urged all parties to “exercise utmost restraint and avoid violence”.

Government officials now admit 38 people have died since the unrest began in December, but the pressure group Human Rights Watch says the number is higher.

0 #1 Mike Ocaya Pocure 2019-04-10 14:49
FELLOW UGANDANS,
We canot do what Algerians have done and, or Sudanese are doing in Khartoum because we are in deep ;Ffe kati kasta kasita utolo brought by the NRA/M7ism and BESIGYE etal!

Yeah, the ongoing 33 years and stillcounting is just the punishing of Biological substances. Yeah the sleep is ongoing in the peaceful Uganda!
Report to administrator