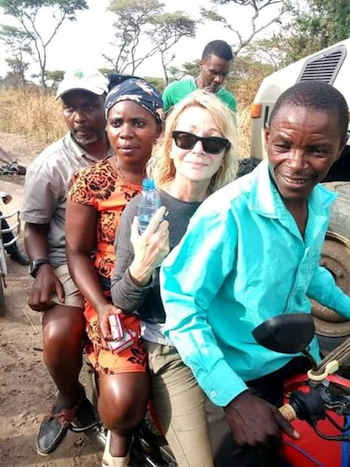 The suspects, only identified as Hakim and Kwarishiima, were flown from Kanungu district where they were tracked using a device which was placed in the ransom money they received before setting Endicott and Mirenge free.

But according to police, the two were rescued from the Democratic Republic of Congo by a joint effort involving the Uganda police, Uganda People's Defence Forces (UPDF) and sister security agencies.

State minister for Tourism Godfrey Kiwanda would later confirm that indeed $30,000 ransom was paid to the kidnappers because government couldn't afford to take any risks and had to protect its name.

Unconfirmed reports indicate that the ransom money was delivered to the kidnappers by a woman riding on a boda boda that crossed into the DR Congo jungles. It's this boda boda that Endicott and Mirenge used to ride back into Ugandan territory.

The US military provided support to Ugandan security forces to accomplish the mission. The support included intelligence, surveillance, and reconnaissance assets and liaison officers, according to US news outlets. Endicott was handed over to the US embassy in Kampala by inspector general of police Martin Okoth Ochola on Monday. Police spokesperson Fred Enanga confirmed the arrests made in regard to the kidnap. He, however, declined to divulge details.

"I can confirm that there were some arrests but I am yet to get details. I will brief you when I get the information," Enanga said.

US President Donald Trump on Monday tasked Uganda government to arrest the kidnappers before people can feel safe to come to Uganda.

“Uganda must find the kidnappers of the American Tourist and guide before people will feel safe in going there,” Trump tweeted. “Bring them to justice openly and quickly!”

However, the fate of six Ugandans kidnapped four days before Endicott and Mirenge’s kidnap remains a mystery.