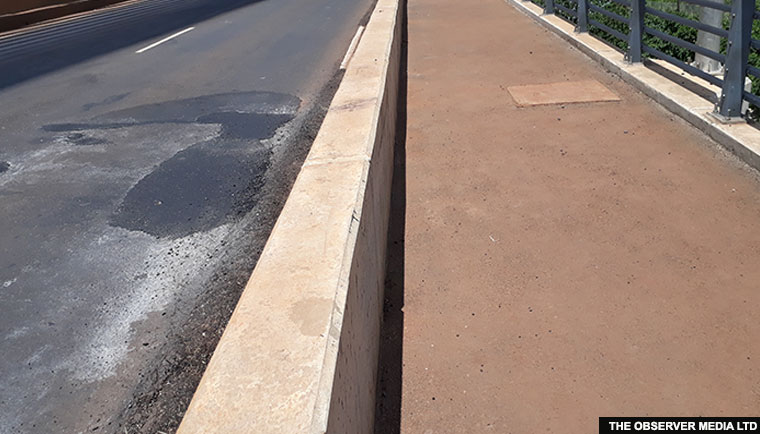 It was supposed to be an iconic flawless monument of national pride but the Source of the Nile bridge is peeling away.

In less than a month after renovation works on a damaged section of the bridge began, the new asphalt wearing layer has started peeling. This has raised doubts among key stakeholders, on top of creating concern.

On March 30 when The Observer visited the $175m bridge, there were several bumpy sections and patches on the bridge, especially on the import [Jinja-to-Kampala] lane. In one stretch, a seemingly molten asphalt wearing course can be seen peeling away from the deck.

President Museveni commissioned the bridge in October 2018 and it was projected to last 120 years. But barely weeks after that, cracks emerged on the surface and the situation got worse in January 2019, prompting UNRA and the contractor to close a section of the bridge for repairs.

However, even after the laying of a new asphalt wearing course, it has given way at the same spot. According to an official communication from the Uganda National Roads Authority (UNRA), “works to lay a modified layer of asphalt that will bond with the waterproofing material are in the offing. The contractor is making preparations for these permanent works.”

Allan Ssempebwa Kyobe, the UNRA media manager, adds that the works have not been completed as yet. However, several officials privy to the repairs have intimated to The Observer that UNRA and the contractors of the project failed to agree on key construction procedures leading up to the current malaise.

Contractors; Zenitaka Corporation and Hyundai Engineering and Construction Company constructed the structure of the bridge but the laying of the asphalt wearing surface was done by Chinese firm Cico. Oriental Consultants did the supervisory consultation work.

An official from Zenitaka who preferred not to be mentioned said the company disagreed with UNRA over the choice of the sub-contractor and method of laying the asphalt layer. “It was against our wish but UNRA argued that the deadline had to be met [to commission] the bridge. “If a doctor prescribes something else and you go ahead to self-medicate, the doctor cannot be liable for your woes,” he said.

When The Observer reached out to the Attorney General’s office regarding the liability of parties involved in the contract, an official who preferred anonymity due to the sensitivity of the information, said the AG’s office is shocked that up to now, UNRA has failed to cash in the contractor’s performance security bond, which is 20 per cent of the project value.

“We all know there is a two-year defects liability period but that is supposed to cater for minor repairs,” he said. “What we are seeing are major structural repairs that should mean the contractor failed to meet their contractual performance obligations. So, UNRA should instead be moving to enforce this security for material breaches and poor workmanship. It’s because of the loss to the economy resulting out of disruptions that UNRA is entitled to move against the contractor’s performance security. The way government would restore itself in an equilibrium position.”

He added that government needs to conduct an independent construction audit to be carried out by a professional engineering company that has supervised or managed similar bridge works before.

“At this moment, no one knows the quality of the work and strength of the bridge or whether the 120-year design life is fake news. If it is indeed true UNRA went against the contractor’s wishes, then it is liable for the mess and the caused government losses.”

Robert Kafeero Sekitoleko, the chairperson of parliament’s Physical Infrastructure committee, told The Observer yesterday that it will be a shame if there is poor workmanship but insisted there are no major repairs. “I visited the bridge and was told the permanent layer has not been put in place. I still believe that is the case but we are soon going to review UNRA’s budget for the next financial year and we will raise all key issues before passing it,” he said.

“The failure of Ugandans to enjoy a well-built bridge free of the disruptions would be a loss to the economy and major embarrassment,” he said.

The Observer has seen documentation which shows that everything seemed to go according to plan until 2016 when Oriental Consultants – at the request of contractors – asked for an extra $49.1m on top of an extension of the period to finish the project.

The Observer has learnt that the precursor to this was the failure of a sub-contractor, Prism Construction company, to drill and penetrate the rock at the site. A source at UNRA who preferred anonymity told us that Prism Construction Company procured initially substandard machinery to do the job, leading to a six-month delay until they shipped in advanced equipment from Germany.

Incidentally, Prism’s competence for such a job was dismissed at the initial stage by UNRA under the stewardship of Eng Sebbugga Kimeze before he left office in 2015.

Amidst all this, key parties in the construction of the bridge have so far remained silent on where the blame lies. This, according to various sources, raises suspicion that there could be collusion.

Chinese company CICO was subcontracted for the asphalt layer that developed cracks within days of the bridge commissioning in October 2018.

“Heads would be rolling at UNRA or civil suits would have been filed. If the simplest part of the project is falling to pieces, how about the complex parts such as pylons, cables holding the deck and the deck itself?” he wondered.

Meanwhile, there could be a bigger conspiracy after various sources told The Observer that CICO was imposed on the contractors. “Japanese companies don’t work on projects with Chinese and CICO’s past was dented by the Mukono-Katosi scandal. Most likely there was a force that imposed CICO on the Japanese and they now cannot move against them,” one source said.

The Observer has learnt that ordinarily, benefits for a project of this magnitude must exceed the costs but when the costs exceed the benefits, then such a project is not viable.

Prior to the project start when consultation work between government and Japanese donors was completed in 2013, it was estimated that the bridge would cost $125m in total (including land acquisition, engineering design supervision, contingencies, construction, etc).

That assessment determined that the project was viable if it did not exceed certain cost thresholds and in this case, all parties agreed to it. Oriental Consultants, a Japanese company contracted to carry out the project feasibility study, came up with the figure after more than twelve months of number crunching assessment.

It is at this stage that government assesses the value-for-money aspect to know whether the project is viable and in this case, $125m was found to be at the limit of viability, meaning any extra cost would deem it unworthy of spending on.

A Makerere University lecturer who preferred anonymity because he does consultation work with various government projects said the bridge is too costly at $175m. “We fell in a trap we cannot get out of because if the project cost had been determined as $175m from the start, it wouldn’t have kicked off because it would not be viable,” he said.

An official from the Public Procurement and Disposal of Public Assets Authority (PPDA) went on to suggest that the Nile bridge is just one of the ways international firms exploit poor countries by creating resource sinking basin situations after projects have commenced.

“Just look around at several donor-funded projects like the Kampala Northern Bypass which started at Euros 67 million now standing at Euros 150 million and you will realise that they give you a figure at the start and after work commences, they bring other costs that government has to pay or else the project stalls,” he says.

“There should be a ceiling on claims by contractors but many times donor-funded projects have no such restrictions, which creates a good avenue to inflate costs.”

+1 #1 Kelly 2019-04-03 12:00
"Nile bridge fails again, what next?"
Well, what next is for a few soul-less Ugandans to be sacrificed (fatal accidents-God forbid) so that the politburo can extend their life spans in this wretched of the earth country called Uganda.

I don't want to speculate here but if indeed some collusion took place hence a shoddy work done, let these religious leaders not tell us to pray for this country.

We have prayed enough and now we need to stone a few "innocent" people without trial to set a precedent!!! Enough was enough until 1990.
Report to administrator
+1 #2 Zachary Lubwama 2019-04-03 14:04
It is time to know whether the current regime can bite or not.

This is too much for this poor country. Already we have a bill of US$10b to settle because of serious mistakes or call it carelessness/adventurism by this regime.

We have the flawed Kiira dam extension which never worked. We have the Katosi road losses, etc. This country needs performers not just lecturers about Africa's problems but have no ability to tackle even anyone of them.
Report to administrator
+2 #3 Kibedi Nkuutu 2019-04-03 14:57
Am really surprised that Sekitoleko is more interested in the monetary part of this equation than the lives of people who would perish in case this bridge collapses!

This is going to be another "white elephant" engineered but not realized by the govt. of NRM. This bridge should be closed immediately, and not just for a few fixes, but until the problem has been fixed.

Remember it is not only Ugandans going to use this bridge, but even foreigners. It wouldn't look good on Ugandans if the whole Presidential Convoy perishes under this bridge...since bridges never give notice when they are going to collapse!

UNRA: Close the damn bridge before we regret our actions. Finger-pointing will come up later.
Report to administrator