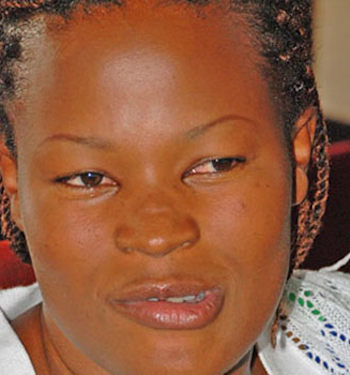 The state minister for ICT and National Guidance, Idah Erios Nantaba has declined to honour a police summon requiring her to make a statement in regards to the recent shooting dead of a handcuffed Ronald Ssebulime.

Ssebulime, a widower was shot dead last Sunday along the Kayunga-Mukono road near Ggavu by police officers after being pursued and arrested on what later turned out to be wrongful suspicion of attempting to assassinate Nantaba. Nantaba and her armed bodyguard, reportedly pursued Ssebulime who was riding a sports bike at the time twice in vain before contacting Nagallama police station.

In a letter dated, March 29 to the Director of Criminal Investigations (CID), Nantaba says she has been ”directed by His Excellency the president to confine within my premises until he himself instructs otherwise.”

She adds that in such circumstances, she is unable to travel in person to Kibuli CID headquarters as requested, but if police so wishes, they can visit her at her premises to record the required statement.

In several interviews and social media messages, Nantaba has shown almost no remorse for the death of Ssebulime, instead scoffing at the family for being used by some people and the media to attempt to ’milk money’ out of her following the incident.

Police has since apologized for the shooting, retracting an earlier statement that indicated that Ssebulime was shot dead after being suspected of trailing Nantaba for some time. Police spokesperson Fred Enanga said the police officers who were involved in the incident, fabricated the narrative and concealed the true facts to justify the shooting - claiming that Ssebulime was in possession of a gun.

However eyewitnesses said that Ssebulime was picked off a police truck and shot twice in the chest by a police officer who was heard saying that "the order from above has changed."

Ssebulime’s family insists that he was on his way to visit a boarding student at St Andrews Kaggwa school. Enanga said indeed exhibits found in Ssebulime’s bag were containing mostly of eats and drinks meant for school children.

Nantaba insists that Ssebulime is not as innocent as has been portrayed by the media. She said, she, more than anybody else wanted Ssebulime alive so he could answer the many questions regarding the other previous assassinations of prominent Ugandans and officials.

In other words, except those who arrogate themselves to be ABOVE more Ugandan than others; otherwise, before God and the constitution of the Republic of Uganda, every Ugandan is a VIP.

Since when are some Ugandans more important than others before the law?

By the constitution, if there is suspicion of a crime been committed and/or a breach of the law of the land; even the president is suppose to report to the nearest police station.

In other words, Nantaba should give Ugandans a break with her self-importance and/or Mr. M7's orders and report to the CIID Hqtrs.
Report to administrator
0 #12 Lakwena 2019-04-01 08:16
Because of her courage of facing off with land-grabbers like Karangwa in Kayunya, I was an admirer of Hon Nantaba. But I am becoming one her disappointee.

In other words it is not yet too late to regain her credibility.

I just want to caution Nantaba over her Bravado of being close to the power that be.

As a reminder to many turkey headed Ugandans, Mr. M7 has categorically made it clear that he is FRIENDLESS.

It follows therefore that; a FRIENDLESS person is necessarily FAITHLESS. Logically a FAITHLESS person is necessarily DISHONEST, LAWLESS, UNJUST, UNFAIR, TRAITOROUS, CRUEL and morally FOUL.
Report to administrator
0 #13 Kelly 2019-04-01 08:47
Wainainchi,
Who was mourning losses of NRM politicians? Wainainchi asks. Short answer-their relatives and kinsmen who are Ugandans. But again, who are the NRM politicians you are talking about?

And do you have any clue as to who killed them? From AG Francis Ayume, Brig. Mayombo, Gen. Aronda, Hon. Cerina Nebanda to AIG Kaweesi, Afande Kirumira…to Muslim Clerics to State Prosecutor Joan Kagezi…the list is endless.

Are you sure about their murderers? What if the enemy is within?
Report to administrator
0 #14 Concerned Ugandan 2019-04-01 09:49
"Nantaba insists that Ssebulime is not as innocent as has been portrayed by the media. She said, she, more than anybody else wanted Ssebulime alive so he could answer the many questions regarding the other previous assassinations of prominent Ugandans and officials."

My advice to His Excellency is that he should introduce mandatory periodic mental health checkups for all his ministers. This lady exhibits classic symptoms of paranoid schizophrenia!
Report to administrator
12