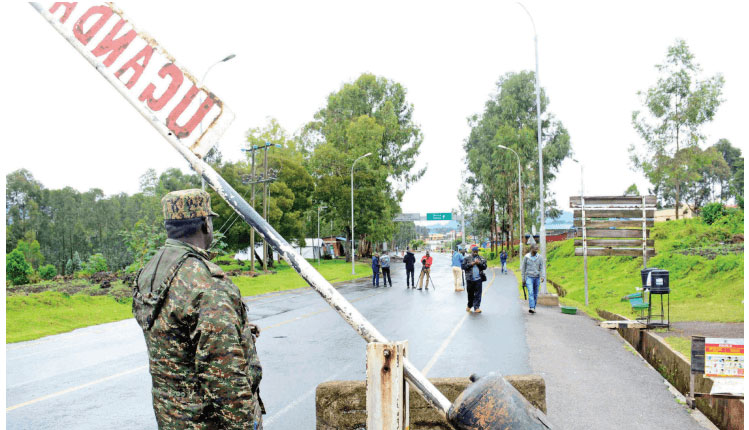 A soldier at the Uganda-Rwanda border

Rwandan students who were studying in Uganda have reportedly been asked by Rwandan universities to start afresh because the “curricula are different in the countries.”

Diplomatic relations between Uganda and Rwanda soured late last month when Rwanda closed its borders to Ugandan goods and traders and also blocked its nationals from crossing into Uganda. Among those directly affected are students and traders from both countries.

One of the affected students according is Deo Nahimana, a third-year student doing Information Technology at Uganda Christian University (UCU). Rwanda’s travel advisory found him in Rwanda and when he reportedly contacted the University of Kigali’s Musanze district campus, the University of Technology and Business Studies Gisenyi campus and the Kigali Independent University (ULK), he was told they could only admit him if he starts afresh.

“They have all responded that they can only give me a place if I accept to start from Year One,” Nahimana is quoted by The Chronicles as saying.

His several desperate efforts to return to Uganda through the Cyanika and Kagitumba borders to complete his studies have been frustrated swatted by the uncompromising Rwandan security.

“The universities I contacted [in Rwanda] told me that the curricula are different in the two countries,” he added.

Espoir Nsengiyumva, also a Rwandan student at UCU as Nahimana, told The Chronicles separately that he had contacted more than three universities in Kigali, and they all told him to start afresh.

“Some either do not have the Information Technology faculty or those that have it told me I have to start afresh,” said Nsengiyumva.

Ange Uwase, a Kampala International University (KIU) student was just a few months away from completing her bachelors degree in June, and was preparing her dissertation. She was reportedly turned back at the border when she attempted to cross into Uganda from Rwanda.

Uwase told The Chronicles that she did not try to seek out a local university in Kigali to allow her complete her bachelors because of a separate incident that happened when she was still in second-year. Apparently, she had wanted to shift from Uganda to Rwanda. Universities that Uwase consulted demanded that she starts afresh in the first year.

“When I could not return to Uganda, I decided not to ask any university to allow me finish my research here because it is time wasting and unnecessary expenses,” she explained.

She added: “It seems as though some of my friends who travelled before (the travel advisory) predicted what has happened. But there are others who are still here like me.”

Rwandan Local Government minister Prof Anastase Shyaka is quoted as saying that; as far as he was concerned, all school going students who were studying in Uganda before had been successfully enrolled in Rwanda.

“I would like to clarify that none of our children has failed to find a school to continue education,” said Shyaka at the conference briefing media on the resolutions from the 16th leadership retreat on March 12.

At the same retreat, Kagame said there was absolutely no reason for any Rwandan national to cross into Uganda - not for education, healthcare, water or trade. Rwandan nationals near the border with Uganda have been seeking social services such as water, education, healthcare and goods from Uganda. Rwanda recently destroyed the foot bridges that its nationals were using to cross into Uganda following the travel advisory.

According to the same publication, Rwandan journalism students who were scheduled to travel to Uganda for their internship program in Ugandan media houses have also been affected by Kigali’s travel advisory.

In January this year, under the Fojo Project, a Swedish project, the University of Rwanda reportedly signed a five year Memorandum of Understanding (MoU) with Uganda’s Makerere University under which the latter would facilitate internships for Rwandan journalism students in Ugandan media houses.

The first lot of 20 students were scheduled to travel to Uganda in May and June this year. According to the officials, the external internship was meant to enable ‘graduating students to broaden their skills though working in well equipped newsrooms and alongside experienced journalists.’

“At this point Fojo and SJC have postponed this activity due to the sensitive situation between Rwanda and Uganda. This has been communicated to the University of Rwanda and the agreed with the decision,” Anki Wood, the Fojo Project manager for Rwanda and Kenya is quoted as saying.

Our efforts to contact Makerere University communications officials were futile as the known phone numbers were off.

Recently, Rwanda’s minister of State for Foreign Affairs in charge of the East African Community Olivier Nduhungirehe said that so far Rwanda has written at least 13 diplomatic letters to Uganda but have got no response in regards to the existing allegations.

Let Kagame also start his degree afresh since he studied in Uganda. this is really unfair for the Rwandese students studying in Uganda. how do you tell somebody who has been hustling to get his tuition and his almost finished with his or her degree to restart again?

it seems Kagame is starting to show his real colours. he has border conflict with all his neighbouring countries like Tanzania, Burundi, DR.congo and now Uganda. with all this conflict, it seems to me that kagame is the problem here.

In other words Dejong, that is what fascists are made of. They don't give a damn about their citizens have to go thru.
Report to administrator
12