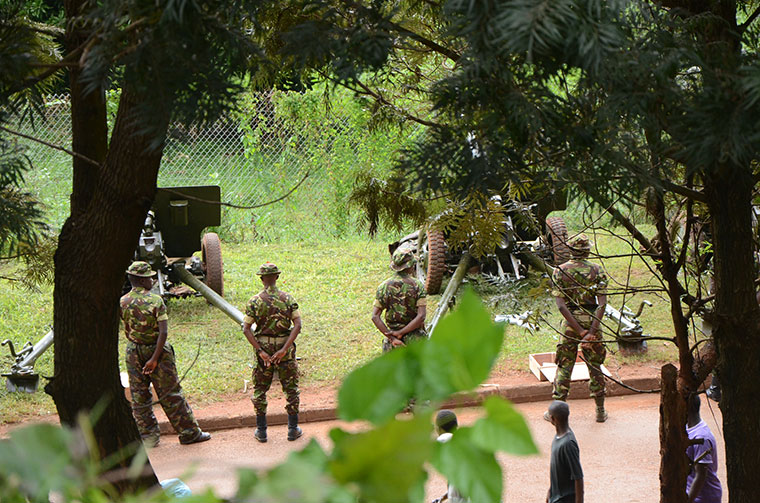 Uganda’s army leadership yesterday denied fresh reports that it has again quietly deployed troops to fight alongside the Juba government, an action which would call into question its mediator role in that conflict.

Strongly denying this latest revelation, military spokesperson Brig Richard Karemire said any such reports were unfounded. Karemire said the ‘The Sixty 4 Tribes Press’ was circulating propaganda in this respect on social media.

“No UPDF troops are in South Sudan. There is no iota of truth in what has been circulated by “Sixty 4 Tribes Press” alleging death of Ugandan soldiers in Yei river. The fact of the matter is that there are no UPDF combat troops deployed in South Sudan,” Karemire said.

If true, this would be yet another episode of UPDF involvement in the long-running South Sudan conflict – a war it has previously inserted itself into to prop up Salva Kiir’s embattled government. Fungaroo told journalists at parliament that this deployment since December last year was, however, never approved by the House.

According to Fungaroo, authorities who he did not name had informed him that Uganda’s forces were in South Sudan only to protect road workers. But contrary to this information, the MP said people fleeing the fighting say that Ugandan troops injured in the fighting are admitted in Midigo health centre IV, Yumbe and Arua hospitals.

“We hear from refugees who are running away from war that our troops are involved in the fighting; so, we want the ministers of foreign affairs and defence to tell us why the UPDF was deployed without the approval of parliament,” Fungaroo said.

“What is the UPDF doing in South Sudan again? How can you deploy troops of Uganda outside the borders [without parliamentary approval]? The fighting involving our troops [in Yei River State] is going on in secrecy and that is troubling to us Ugandans especially at the borders,” he added.

“The UPDF [is] participating in war like they are being hired. Anyone who wants forces talks to government and soldiers go there like UPDF is a mercenary force. It is in the laws that if you are to deploy troops outside Uganda, parliament must know,” Fungaroo said.

Fungaroo said it was disheartening for Uganda’s troops to engage in fighting while government keeps positioning itself as a mediator. “On one side, you appear as a mediator; on the other side, you also go to war; what kind of government is this? Government should be seen as a mediator for people who are fighting in South Sudan so that we consolidate peace, security and refugees return to their country [but] this ugly face of fighting is coming up again,” Fungaroo said.

The MP said he is concerned about the people of South Sudan “because they are our relatives... and we assist each other in hard times.”

Article 209 of the Constitution stipulates the army’s functions, including preserving and defending Uganda’s sovereignty and territorial integrity. Section 39 of the UPDF Act requires parliament to ratify a deployment for peace enforcement, and Section 40 says the [Defence] minister shall only enter into an agreement, referred to as a “Status of Forces Agreement”, with a host country.

WHO IS GEN CIRILO SWAKA?

Gen Cirilo Swaka is a Bari by tribe from Juba and was previously deputy chief of general staff and logistics. He was the highest-ranking officer to resign after former South Sudan vice president Dr Riek Machar fled. He resigned from the Sudan’s People’s Liberation Army (SPLA) over alleged abuses by security forces against civilians.

Gen Swaka also accused South Sudan president Salva Kiir of promoting ethnic favouritism in the military and deviating from the principles for which they launched the struggle under the tutelage of the late Col Dr John Garang.

He publicly refused to sign the final power sharing and security arrangements pact on August 5, 2018 in Khartoum, citing lack of credibility of the deal. He also accused Sudan and Uganda - the peace guarantors - of promoting their interests at the expense of lasting stability in South Sudan.

Yei is ma home town. let the UPDF splash ma pipo blood but time will tell what we shall do to ugandanswhen Salva is gone. the reverse will be done

But Wani, if you are back and forth in Uganda and SS, don't burn the boat or bridge when you are back in Yei.

In other words, Southern Sudan is a tinderbox. So you are better of shutting the F--up. Otherwise how many Ugandans have you people harmed since your continuous and endless conflict?

E.g., you people loaf around in Kampala like Giraffes in the national part, but nobody stops and/or ask them whether they are validly in Uganda.