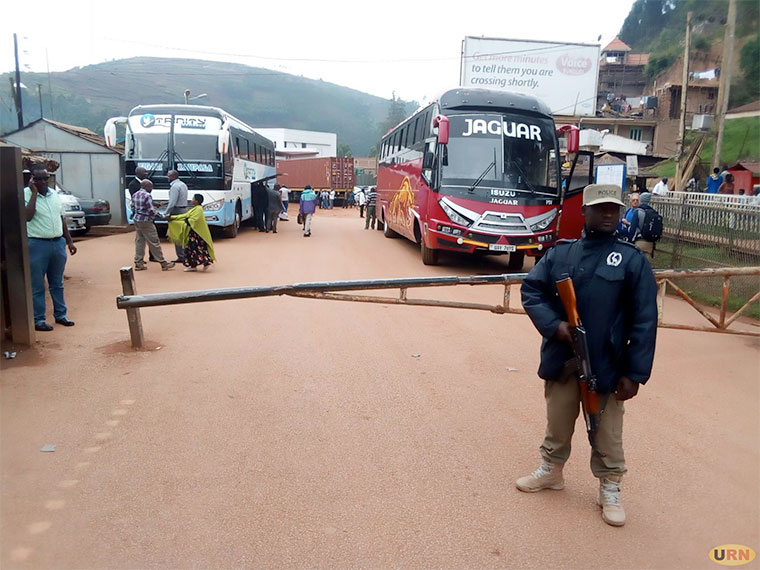 Buses at the border in Katuna

Rwanda has finally allowed passenger buses to travel from Kigali to Kampala through the Katuna border in Kabale district and Chanika in Kisoro district but with strict restrictions against carrying Rwandans aboard.

Rwanda has over the last one week blocked cargo trucks and buses from crossing through the two points of entry, reportedly to pave way for upgrading the one stop border post at Gatuna. The trucks were advised to use Mirama/Kagitumba border in Ntungamo district, a directive which paralyzed business and transport across the borderline.

On Saturday, Rwanda Revenue Authority (RRA) increased tariffs for every truck crossing via Chanika, from Rwanda Francs 200,000 (about 816,000) to Rwanda Francs 400,000 (about Shs 1,632,000). Now, the bus operators say that they have been allowed to cross to and from Rwanda since Sunday evening but on different and tougher terms.

Trinity bus company operators told our reporter that they were allowed by security and Rwanda Revenue Authority officials to cross from Rwanda to Uganda via Katuna border on Monday, on condition that they carried no Rwandans to Uganda.

Gideon Ashaba, the booking officer with Jaguar Bus Company says that security and RRA officials are conducting thorough checks in all buses and those found carrying Rwandan nationals to Uganda are fined $5,000 (about Shs 18 million).

Ashaba said that only 15 passengers had been cleared to travel from Kigali to Uganda by midday today. He adds that because most of their clients were Rwandan nationals, bus companies are now suffering huge losses as a result of the directive.

"The situation is very very bad because from day one, buses were denied entry into Rwanda and going from Rwanda. From yesterday, we got a chance, we were told that now the buses are not free to move from Uganda to Rwanda but on condition that buses are not supposed to carry Rwandans. When they find a Rwandan passenger in our bus, the bus is fined $5000. That means now we don’t have people because our customers were Rwandans. Like now, the bus has only 15 people on board out of 60. It has affected us because in terms of fuel and in terms of allowances, the buses are now operating on losses." said Ashaba.

Apart from Jaguar and Trinity, other bus companies like Modern Coaster, Volcano, Mash POA and Simba are yet to resume business. The directive corresponds with a tweet by Rwandan minister of Foreign Affairs and International Cooperation, Richard Sezibera indicating that Rwandans are strongly advised not to travel to Uganda due to ongoing arrests, harassment, and torture.

Katuna town council chairperson Nelson Nshangabashaija says that even Rwandan nationals who were crossing to Katuna to buy food for survival have been blocked by Rwandan security officials. He adds that the situation at the border is still tense.

"The situation here in Katuna is not good, no people are crossing from Uganda to Rwanda. Rwanda is only allowing Ugandans, Congolese, Burundians to exit from Rwanda but no Rwandan is allowed to travel into Uganda. Even those who have been getting education in Uganda, they are not allowed. Those who have been getting medication from Uganda are not allowed. People who are travelling through these buses, when they are non-Rwandans there isn’t any problem. But if they find that a Rwandan is in a bus, they fine you $5000." Nshangabashaija said.

you amaze me . Of course Pierre Nkurunzinza is part of this triangular mess .

Nkuruniza has openly accused Kagame of hosting , traning and financing anti- Burundi rebels in preparation for a coup.

Kagame , on his part , has accused Nkurunziza of doing the same.
As we speak , there are more than 7000 Burundi refugees in Rwanda. Find out about the rest.

And now , Rwanda is not not only closing the border , it is openly accusing Uganda of hosting ant-Kagame thugs , but also of perseucting or deporting " pro- Rwanda" people.

Regarding "killing three presidents". those are your words, not mine.
Me thinks that God should do what He has to do before there is another massacre.

Yes , there is a lot of killing in Burundu under Nkurunziza
Report to administrator
0 #12 Wooden K. 2019-03-05 15:56
Yes , Kagame is suspected of following his opponents everywhere they may be.
Do not ask me what "following" entails.

Yes , our own Super Glue is right in the middle of this one . like a tape worm is part of constant stomach pain

Rwanda & Uganda are rwandese grounds, controlled by 2 rwandese who can do as they want!

Kagame & Museveni will fight one another to show how powerful they are as each has a country to control!

Why have Ugandans surrendered their country to Museveni?

Why don't Ugandans want to belong to their country, control, manage it & just live?

This East African Community was founded to shut up/shut out/bring to nothing... Uganda-Kenya-Tanzania that were doing their best to be 1 people respecting each other!

Tribal leaders MUST stand down & Ugandans MUST UNITE & throw Museveni out before rwandese turn it into their legal war zone!

As long as the tribalistic system stands, no outsider will help Ugandans & the entire world will just watch the 2 rwandese (Kagame/Museveni) settle their tribal differences!

Why do Ugandans let rwandese to destroy them to finally own their country: Kagame has Rwanda while Museveni will finally have Uganda as his own country?
Report to administrator
-1 #15 Akot 2019-03-05 19:50
Lakwena, thanks.

Kagame & rwandese with him must be tired waiting for Museveni to finally really own Uganda to ensure rwandese not wanted by Kagame never bother them ever again!

This is fight for another country for rwandese & if Ugandans don't stop them, it's our people who will have to look for elsewhere to go!

Ugandans MUST bring down the tribalistic system keeping Museveni in power & stop rwandese fighting to have their second country!

Even when Ugandans don't want to Reform the Republic, Tribal States will shut rwandese out of Uganda!

Why are Ugandans so suicidal, especially as they are so attached to tribal belonging, yet will be tribal landless when rwandese take over the zone?
Report to administrator
-1 #16 Akot 2019-03-05 19:58
Quoting fkyyyyyy:

You are so right!

Ugandans MUST throw Museveni out before things get too bad for them, especially as Museveni uses our people against one another, yet will thow all tribes out & replace them with rwandese not wanted by Kagame!
Report to administrator
0 #17 Kim 2019-03-09 22:32
Akot or whoever are stop talking about ugandans like you you know us very well because you don't,,for your information we as ugandans stand by our president.

Rwanda should keep in that they are playing with fire. kagame should remember who put him in power and that whats given can be taken.Am Uganda and proud.
Report to administrator
0 #18 Kim 2019-03-09 23:10
If Rwanda wishs to close its boarders to uganda let them them, uganda doesn't need it anyway.uganda will find other countries to trade with.
Report to administrator
12