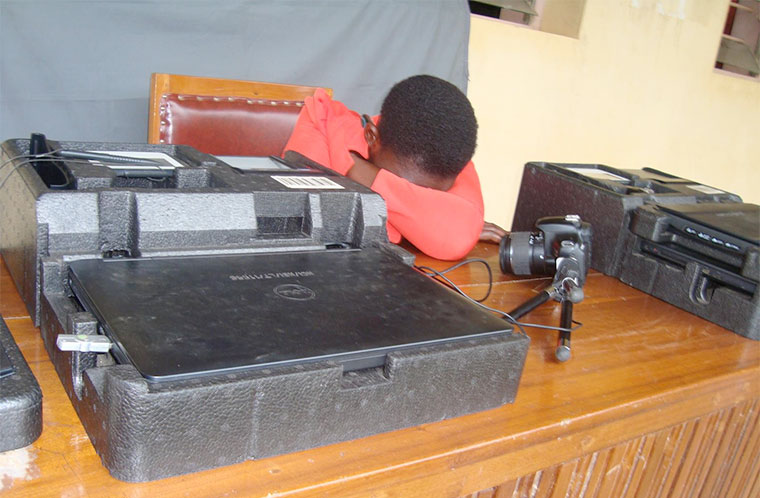 NIRA enrollment officer dodging our camera, the officers are accused of extorting ID applicants in Masaka

Several residents of Masaka district have failed to register for the National IDs after objecting to the demands for bribes by the registration officers.

The National Identification Registration Authority (NIRA), early this month embarked on the second phase of registration for people who missed the initial phase in 2015. The residual registration process is being conducted at sub-counties and division headquarters across the country.

But, dozens of residents in Masaka district are complaining that the officers are instead extorting money from applicants, before capturing their data. They have also been accused of exhibiting a poor working attitude and registering non-Ugandans (Rwandans and Tanzanians). According to residents, the registration officers ask for between Shs 10,000 and 30,000 per person to have their details taken.

Musa Kaboggozza and Matia Kalule, both residents of Buwunga sub-county told URN that they deliberately declined a request for money by one of the enrolment officers and as such, their particulars, were never captured. Kaboggozza explains that they are charged different illegal fees at all the three points of filling forms, photographs and capturing thumbprints.

"Government announced that acquiring National IDs was free, but when I reached the first table at the sub county, the young man asked me whether I knew the price of the ID? I told him I know it is free but I will give you money for soda if that is what you want. So I gave him Shs 1,000, but he told me that I couldn’t proceed with the process so I went back home. My details were not captured." said Kaboggozza.

Our reporter visited the registration centre at Buwunga sub-county and found that the process had been halted, allegedly because of a shortage of registration forms. But residents said that the excuse is used to fleece money from unsuspecting residents.

NIRA communications officer for Masaka, Joseph Kitumba said he had also heard about reports of extortion, but said those involved in the practice are not in any way associated with NIRA. Kitumba said they have learnt of the existence of opportunists who are taking advantage of the community rush to register for IDs to con them.

Masaka district internal security officer Lt Andrew Kandiho said that they are closely studying the reports and they will soon arrest the culprits. He argued the public to volunteer information to security in secrecy to enable them to address the underlying irregularities affecting the process.

Kyotera district member of parliament Robinah Ssentongo said that she has also obtained reports of registration on aliens especially around the landing sites and areas around the Uganda-Tanzania border of Mutukula.

What a shit-hole of a country we are in! I want to cry or curse God and die.
Report to administrator