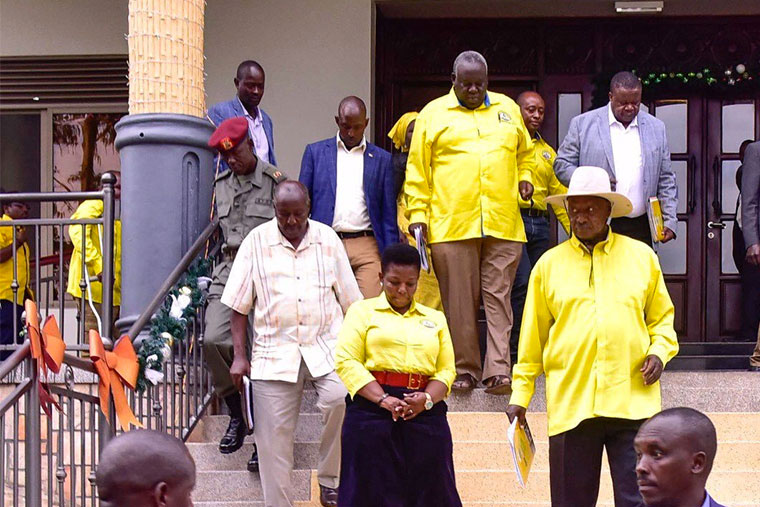 Museveni with some of the NRM leaders

Five years since the NRM constitution was amended to give the party’s chairman powers to appoint full-time secretariat staff, President Museveni is instead facing more infighting in the organisation he chairs.

Hopes that the amendment would solve the problem of clique formation have not been fulfilled. At the party’s next delegates’ conference planned for November this year, an amendment is likely to be moved for the party to return to the old format where secretariat leaders can hold other political offices at the national level.

Given the appointments, the officials were barred from seeking re-election to parliament because they were expected to dedicate their time to party work. An assessment of the secretariat’s performance since then, however, shows little or no improvement.

Instead, the secretariat is bogged down in endless squabbles amongst its top executives. One of the most pronounced fights is the one between Lumumba and Tanga Odoi, the head of the party’s electoral commission.

The two have fought each other since they took up office. Their latest exchange revolves around who should oversee the implementation of the party’s 2021 political roadmap. According to insiders, there are some other internal fights - some of which stem from lack of clarity on some provisions of the party constitution.

For instance, as deputy secretary general and deputy treasurer, Todwong and Omona, respectively, are rendered lame duck party executives without any roles until when assigned by their seniors.

“It is not only at the secretariat but even down in the districts. We have a problem of leaders understanding their mandate and boundary differently; you find that someone over-interprets his or her mandate, which results into fights,” a senior party official told The Observer.

The four top executives at the secretariat also feel that they were given a raw deal. Their monthly pay cheque is said to be much lower than what an ordinary MP pockets besides other opportunities available to MPs such as foreign trips.

“There is also the issue of status. Previously, they used to access anything at parliament as MPs but now, they go there as strangers which sometimes limits them,” the executive director of Uganda media centre Ofwono Opondo told The Observer.

“We are saying, we should allow them to seek election as national leaders to get that legitimate right as leaders,” Opondo said.

The frustration that the NRM jobs have not given them as much as they expected is said to have negatively impacted on their performance. In effect, mobilisation for the party has failed, raising fears that the emergence of new forces like Kyadondo East MP Robert Kyagulanyi’s People Power group may eat away at NRM grassroots support.

That explains why during this weekend’s retreat of NRM Central Executive Committee (CEC) at Chobe Safari Lodge in Murchison Falls national park, Museveni lectured party chiefs on the general ideological and strategic orientation of NRM.

“The truth is NRM is not well run. The squabbles have become too many, both at the national and lower levels, and they have dragged on simply because Museveni hasn’t come out to handle them, yet some of the disagreements can be resolved through the party structures,” Opondo said.

According to Opondo, some of the amendments to the party constitution were proposed by Museveni in the hope of ending the disagreements.

“For instance, the issue of lining up behind candidates during party primaries came out of his concern with the rising number of independents in parliament,”  Opondo said.

On February 16, CEC agreed to recommend to all party structures the adoption of voters lining up behind candidates as a mode of election in all internal party elections. The change from a secret ballot was adopted after reports that the NRM register had been infiltrated by non-party supporters.

Museveni is also reported to have been told that most of the flaws that characterize the NRM primaries result from the ease with which the party’s electoral officials get compromised.

The CEC retreat which ends today (Wednesday) is also expected to determine and agree on areas in Uganda’s national constitution that should be amended.