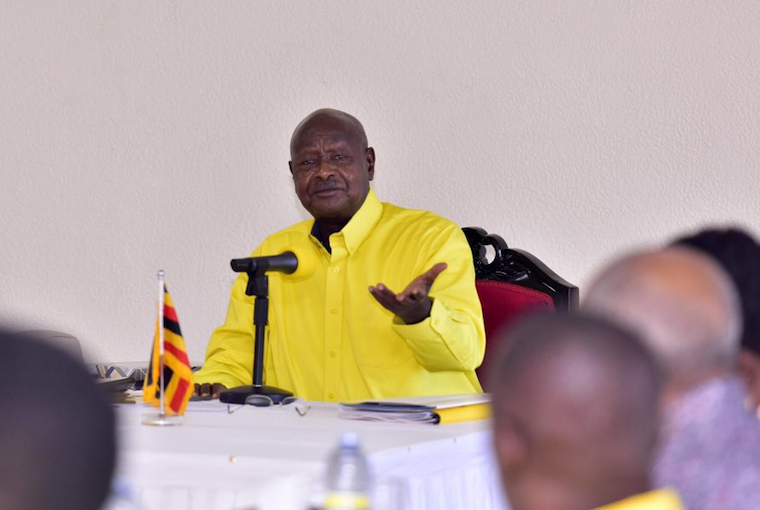 President Museveni is set to contest again for the presidency

The ruling party National Resistance Movement (NRM) supreme organ, Central Executive Committee (CEC) has endorsed President Yoweri Museveni as the party's sole candidate for the 2021 elections.
The resolution was reached on Tuesday afternoon during the five day retreat of CEC at Chobe Safari Lodge in Nwoya district. This means that Museveni who has been Uganda president since 1986 after shooting his way to power, will now contest for a sixth term in office. He will be 76 years old in 2021. He controversially won the last election with 60.75% of the votes with his closest rival Kizza Besigye getting 35%.

NRM senior information manager Rogers Mulindwa said in a statement that CEC has once again endorsed Museveni to run as the party's sole candidate.
In the 2016 presidential elections, the party endorsed Museveni as the sole presidential candidate after Amama Mbabazi, the then party secretary general expressed interest in contesting against Museveni. Mbabazi was subsequently forced out the party.
"To emphatically recommend to the membership of the movement and its organs that His Excellency Yoweri Museveni our leader and General of the African Resistance, continues leading the Movement and the State in 2021 and beyond- as we eliminate the bottlenecks to transformation," reads part of the statement.

Mulindwa notes that the party's top organ also made several directives to government for urgent changes among, which are to expeditiously study the multiple requirements of operationalizing the parish model and proceed with implementation without delay. The model is envisaged to help transform 68 per cent households that are still involved in substance farming.
"The party directs the government to significantly recapitalize the Uganda Development Bank (UDB) in the new financial year, to enable the bank to play a more vigorous and central role in providing affordable credit for transformative effort," further reads the statement.

Mulindwa says that the re-capitalization of UDB shall include relocating the Agricultural Credit Facility from Bank of Uganda to UDB. CEC also directed government to urgently revisit the legal and administrative regime for environmental conservation, as part of a fundamental push to roll back and mitigate the effects of climate change.

It also wants government to urgently revisit the reform of the land legal regime that they say creates unacceptable obstacles to national development. Meanwhile, CEC wants NRM to expeditiously ensure the instruction in patriotism straight from primary to universities and other tertiary institutions.

It also seeks to invest massively in the development, consolidation and dissemination of its ideological line as well as the systematic mentorship of its cadre-ship.
"NRM cadres should appreciate & internalize the need for appropriate strategy & tactics at every phase of the struggle for the fundamental socio-economic transformation of Uganda and Africa," reads the statement.

CEC also tasks its members to sensitise and mobilise Ugandans to work together for the political and economic integration of East Africa as well as the consolidation of an African common market.

But of course tribal leaders can form Independent States to make their tribal lands real 'nations', then manage their land riches that will benefit individual people!

But Museveni can dissolve posts of tribal leaders & Reforms the Republic of Uganda, then be a real man!

Funny, even NRM belongs to Museveni & he alone is the boss!
Report to administrator
-2 #2 Wainainchi 2019-02-20 01:30
Excellent timing and spot on moves and directions.

Full support forv NRM Chairman HE Yoweri Kaguta Museveni to be nominated as NRM sole candidate for next presidential elections Paka lastPaka Paka!!
Neera neera neera Mzee!!!
Report to administrator
0 #3 kabayekka 2019-02-20 02:52
Indeed NRM is an African political party for democracy that says to do as I say but not to do as I do.
Report to administrator
+2 #4 Lakwena 2019-02-20 07:47
How absurd!

It is bewildering that: even after Mr. M7 openly told them off on 26th January 2017, that he is not anybody's servant or employee, and that he is in our State House fighting only for himself, family and belief; but here they are endorsing the same diabolical selfish man as sole candidate.

In other words, because all these dishonorable NRM executives are likewise: nobody's servant, nor employees and fighting only for themselves, families and belief; Ugandans, especially the youths should expect more, if not the worse of the same thing- unemployment and poverty.

Another 5 years of Mr. M7 and NRM leadership will this time around bury them alive.

But God, who bewitched these people or what did we terribly do to you to deserve this absardity?
Report to administrator
+4 #5 Lakwena 2019-02-20 07:57
Stuck with one greedy man for 33 years and counting widespread poverty and dead bodies, but every morning Ugandans are reminded of The Animal Farm nonsense of " fundamental socio-economic transformation of Uganda , blah blah, blah BS.

Remember, humans rejected God's direct rule, yet He let them do as they wanted & did not punish them, but only worned them of troubles ahead!

It's up to Ugandans to UNITE against Museveni, knowing this action will get them help from the outside world!

UN-Europe-USA know Ugandans are living hell, but their hands are tied as it's Ugandans keeping Museveni on through the tribalistic system that goies against their principles!

See, S.Sudanese are tribalists at armed war, yet as they are not tribalistically officially/constitutionally divided & ruled, they get help from UN-EU-USA!

Has UN not built refugee camps/feed tribalists S.Sudanese... in Uganda?

But does UN talk about Ugandans' miseries?

It's up to Ugandans to say NO to tribal leaders, NO to the tribalisticf system, then UNITE, if they want help!

Change is brought about by the oppressed poor who UNITE to ensure no more poverty, no more dead bodies bacause of a lunatic that they alone have the power to throw out!

Why is Museveni even still in Uganda, if our people don't want him?

Why is there no National opposition leader to UNITE Ugandans for independence?

Why is there no leadership, yet there are tribal leaders to ensure Ugandans stay divided, powerless at the mercy of Museveni?

Why is Museveni chief tribal leader in a country he has no tribal land?

Why are Ugandans poor in a country formed by tribal lands to which they pay allegience to, yet it's migrant Museveni who controls every land riches?

While waiting for the other tribes that UNITED for Museveni to make up their minds, why is Acholi not independent State?
Report to administrator