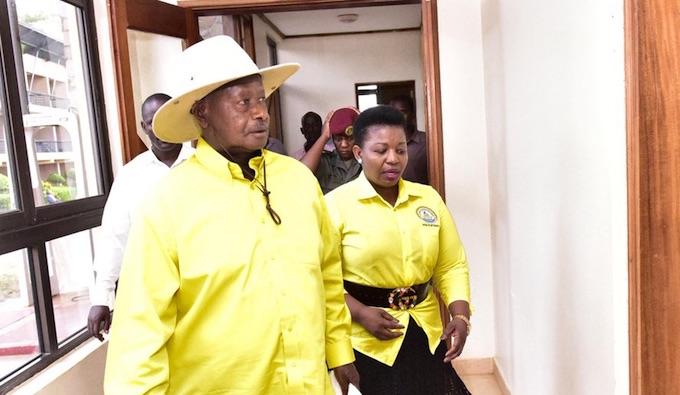 The ruling National Resistance Movement (NRM) party top organ, the central executive committee (CEC) has zeroed on lining-up as the most viable mode for holding internal elections in the party.

The decision will now be introduced to members and other NRM organs for the amendment of the party constitution before it's enforced. The decision was reached at the opening of a 5-day retreat of the CEC at Chobe Safari Lodge, Nwoya district on Saturday.

The CEC retreat is being held under the theme "Building on solid achievements, consolidating the unity of the NRM and the transformation of the wanainchi towards achieving vision 2040".

According to NRM spokesperson Rogers Mulindwa, lining up is aimed at reducing the cost of conducting internal elections. Mulindwa explained that President Yoweri Museveni, the NRM chairman, equally agreed that lining up will reduce commercialization of the electoral process and promote self-evaluation.

"You know how much money we spend on printing ballot papers for villages, sub-counties, district councillors up to MPs. And then you know the ink pads that we use, the basins, the pens for ticking and then the other plastics of whatever we buy. It is very costly and it is also going to minimize commercialization of elections." said Mulindwa.

Mulindwa is equally optimistic that lining up will reduce the number of petitions filed by persons who are not satisfied with the outcome of the process. He says lining up enhances transparency and provides on spot satisfaction amongst the candidates as was evidenced at the local council elections where voters lined up behind their preferred candidates.

"To  minimize this issue of petitions, complaints because we had an example of a good illustration with the LC 1 elections. Out of 69,000 delegates, we had petitions from 45 villages compared to parliamentary elections when we had 158 out of 200. So that of course is an illustration that lining up brings on spot satisfaction." added Mulindwa.

CEC also set up a sub-committee to enhance resource mobilization for the party. The sub-committee chaired by the NRM first national vice chairman Hajji Moses Kigongo is expected to report back to CEC within a period of one month.

While opening the retreat, Museveni highlighted government's major achievements in infrastructure development and service delivery. He, however, emphasized that the weakest point is the economic empowerment of the 68 per cent of the population who rely on subsistence agriculture mainly in the rural areas.

He advised the party's top organ that the retreat's number one pre-occupation should be finding a solution to the 68 per cent of the population that is not in the money economy and have not emerged out of subsistence production.

"These 68 per cent population is our weakest point that we need to discuss, the rest is easy. Let us agree and talk the same language and act together," he said.

Museveni added that whereas the NRM is on track in the provision of the development infrastructure including roads, electricity and service delivery, the presence of a big fraction of the population living a subsistence life is a big challenge to the party and the country.

The ruling party's top organ is also scheduled to discuss the 2021 general election road map as well as constitutional amendments.

0 #1 Wainainchi 2019-02-18 09:11
Congratulations to the National Resistance Movement Chairman Yoweri Kaguta Museveni and all members of CEC on wise decision making and improvement of NRM functioning !!

Well done! It was high time to separate weavel from healthy fruits of Uganda society We are looking forward to seeing dedicated and energetic party members in monitoring and executing strategic programs and goals of Uganda and to improve efficacy of all involved.Time of dormancy and truancy is over.

Wake you call and timely initiative of the Chairman Yoweri Kaguta Museveni,General Secretary Kasule Lumumba and other distinguished members of CEC. Museveni oyee! Uganda oyee!! NRM oyeee!!
Report to administrator
+2 #2 Lakwena 2019-02-18 10:20
In other words, who e.g., will line behind Todwong/twoldwong, should he decides to contest for position of NRM Chairman?

If this is not primitive intimidation and backwardness, what is it?

It is humiliating and disgraceful: because the backwardness with which Ugandans are perennially subjected to the intrigue and manipulation of one man, for whom State House is an end in itself, is appalling.
Report to administrator
0 #3 WADADA roger 2019-02-18 14:26
The Baganda have a saying nti akanafa tekawulira ngombe, indeed these are the last kicks of the NRM.

This archaic method of voting was tested during the local Council 1 elections and it flopped.

The system created a lot of fear among voters to the extent that some feared to participate for fear of being victimized.

If this could happen at the lower level elections, then we are in trouble for positions such as L.C 4 and 5 as well as MPs and President.
Report to administrator
0 #4 WADADA roger 2019-02-18 14:28
This in essence will become the worst primaries ever
Report to administrator
+2 #5 Umukodi 2019-02-18 14:37
Reasons they are doing this are:
1. Intimidation of whoever dares to challenge the incumbents and foremost chief schemer M7

2. They incompetent of organizing any elections without rigging. It's in the DNA of NRA

3. Because NRA is full boot leaders and mediocres.