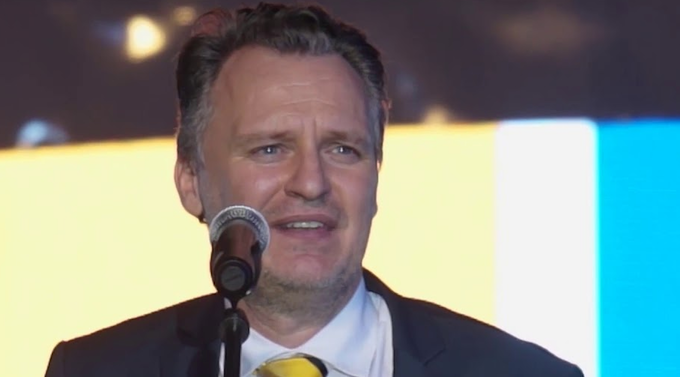 MTN Uganda chief executive officer, Win Wim Vanhelleputte has been deported from the country. Vanhelleputte was deported this evening aboard Brussels Airlines on the orders of the Internal Affairs minister Gen Jeje Odongo.

Vanhelleputtet is the fourth employee of Uganda's telecom giant to be deported in the last one month after being declared  prohibited immigrants.

So far only Mussolini has spoken out about her deportation, saying she was ejected from the country for allegedly inciting violence by funding Robert Kyagulanyi alias Bobi Wine, the Kyandondo East MP and People Power architect.

There has however been an ongoing investigation against more MTN staff for allegedly compromising national security using their positions at the company.

The staff members being investigated as part of a classified investigation have since recorded statements with the Special Investigations Unit (SIU) in Kireka.

The investigations began in July 2018 after the Internal Security Organisation (ISO) raided their call center in Mutundwe a Kampala suburb and removed servers.

According to a reliable source in security circles, government at the time had received intelligence information relating to espionage, tax evasion and money laundering.

The team is under the supervision of deputy inspector general of police (DIGP) Sabiiti Muzeeyi.

+1 #1 Olum S. 2019-02-15 00:00
"So far only Mussolini has spoken out about her deportation, saying she was ejected from the country for allegedly inciting violence by funding Robert Kyagulanyi alias Bobi Wine, the Kyandondo East MP and People Power architect."

So anyone funding MP Kyagulanyi is 'inciting violence'...how would they label those who voted him into office I wonder?
Report to administrator
-7 #2 Wainainchi 2019-02-15 03:14
Bravooooo,!! Congrats General Muzeeyi
Report to administrator
0 #3 kabayekka 2019-02-15 10:04
So now what is happening to these investors who have been in the good books of paying lots of money in tax to this country?

Uganda government is very much in need of these international companies if it has got to pay its high expenditures.

This is an inefficient government of a very poor country that cannot afford chasing away technocrats any how.

The best this government of the people can do is to establish the crime committed properly and take these foreigners to the courts of law. And fine them heavily.
Report to administrator
0 #4 kabayekka 2019-02-15 10:12
These foreigners can afford to pay these heavy fines.

But if this governent of Uganda cannot establish any crime that these businessmen have committed and they are only being victimised, the best these companies can do for the new management is to reduce their output (scale down) and reduce their tax payments.
Report to administrator
-1 #5 kabayekka 2019-02-15 11:47
That is why it is adviseable for such foreign investment companies even if they are from China to have an Association of their own.

They must pick a lesson from the Amin's government of the 1970s and that of Mugabe.

Like the Association of foreign and local investors for African prosperity etc. In this way these dodgy African governments would be sued heavily for throwing out any how from Africa, hard working law abiding peoples.
Report to administrator
0 #6 kabayekka 2019-02-15 11:55
Ambitious African peoples must seriously understand what one Germany-Jew said.

The next time they returned, they picked him up as well with the whole lot of his family, to go and work in Hitler's poplar employment camps.
Report to administrator
0 #7 kabayekka 2019-02-15 12:03
If this gentleman has been deported because his company loves Bobi Wine and he has been helping to run the country's finances with lots of money, what then could happen to someone like John Serumaga a small time Luweero peasant who these days loves Bobi Wine for giving him 3 Kilogrammes of rice to share a dinner with his family!
Report to administrator
0 #8 Juwait kali 2019-02-15 13:12
Wanainchi I told you you cant stop the fire that is coming your way. Wait until they fight back. He he he nkusekeredde.

So you preferred outside business hoping they would not interfere with local politics Mr fish. Forgetting politics is part and parcel of life. They have to secure their investments with future leaders sebo.
Report to administrator
+2 #9 frogmanx 2019-02-15 13:39
I wish we could support our country and government in such situations.

The problem with Africa is that we are so used to listening to outside voices and we never stop for just a second to digest. When you begin to see such overwhelming interests from outside forces (Europe/ America, then you know there is a motive much bigger than meets the eye.

They will say it's democracy. They'll say you need freedom. In reality, it's oil reserves. It's always about their interests. Look at all the countries where they intervene and then also look at those that they turn a blind eye to. They will come for your fuel and then destabilize you for years as they swindle. This is non partisan. It's patriotic.
Report to administrator
-1 #10 kabayekka 2019-02-15 19:00
Frogmax are you saying the white man should return to Africa as a toilet cleaner for the African man who is in power for the sake of it?

There is nothing that does not meet the African man these days. Every Uganda person knows that this country has oil but is helpless because it has no capacity to earn a proper living for its people from this oil.

If Frogmax you think that MTN Executives have been deported from Uganda because they are dodgy, well take them to the courts of law for improper behaviour, rigging Uganda democracy, economic treason or for your opinion confusing childish Africans(uneducated) as they rob them of their natural resources.
Report to administrator