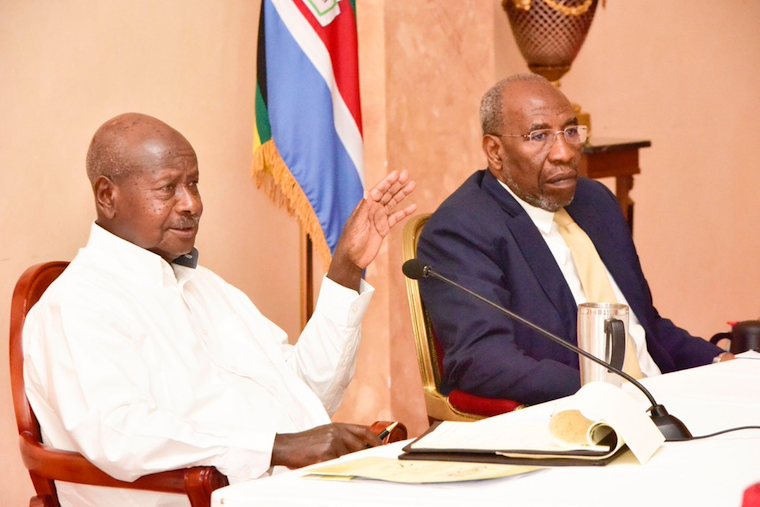 President Yoweri Museveni has accused his ministers of being selfish and sleepy, which he says affects potential investments in the country.

Speaking during the 6th presidential investor round-table meeting at State House Entebbe, Museveni said there's no doubt that many of the people in the ministries do nothing. His comments followed defensive statements by the state minister for Agriculture, Christopher Kibazanga on why the ministry had failed to transform the sector especially on value addition.

Mahmood Hudda, the managing director of Mayirye Estates Limited which exports flowers, proposed that the ministry shifts its policy from small to large scale farming that requires establishment of green houses, irrigation and modern farming methods.

Hudda noted that Uganda has a lot of opportunities of adding value to things like coffee, avocado, passion fruits and others to grow its economy. He said the ministry needed to modernize before farmers do.

In response, Kibazanga said the country was in the process of branding its coffee and that discussions were ongoing. He promised to come up with a cabinet paper recommending that avocado becomes one of the country's strategic crops.

Kibazanga hastened to add that the agriculture sector is private sector driven and that government could only carry out research and extension. His remarks angered Museveni who accused him of wasting time and contradicting himself on the mandate of his ministry.

"Many of these ministers are selfish, they think about themselves. If you don't listen, then you are negative. You try to cover up your ignorance," said Museveni.

Museveni rubbished the minister's statement, saying it doesn't add up. "The ministry apart from research and extension regulates the sector. Saying that the sector is private led... I think this should not even go on our record. What the minister is saying doesn't add up."

Hudda further pinned Kibazanga's ministry, saying he had written several letters and concept papers on different matters without any response. Museveni agreed with Hudda, noting that many people in the ministries are parasites.

"The people of Uganda have no problem. If you tell them to do that, they will do it, do this they will do it….There is no doubt that many of the people in the ministries are really parasites because they don’t do anything, they don’t give up positions for others and we call this parasitism. Am very glad that you’re seeing this." said Museveni.

Asked by journalists why he doesn't drop the sleep ministers, Museveni said that it wasn't only ministers but also Ugandans who are not taking up opportunities and associating with the right people to grow the country.

Lame duck Museveni blames pupets he put in office to blind the world he is a democrat when he is the worst dictator ever, playing about with everybody!

If parliament/mps have no say, how would ministers he appoints have a say?

Why does Museveni still have tribal leaders in posts knowing Ugandans will go along with him instead of having 1 of their own as leader?

Why will Ugandans still vote as there will be no other than Museveni who can rule like Amin did without parliament/mps who cost tax payers so much for doing NOTHING?
Report to administrator
+1 #12 Akot 2019-02-08 20:37
kelem, thanks but,!

Museveni is now campaigning for next fake election, so is blaming the very people who did NOTHING for Ugandans because that was/is what he wanted/wants, but now they take blames for every thing!


Why do Ugandans let Museveni just go on urinating on them, especialy as he is 'psycho'?

The entire world knows it's Ugandans letting Museveni go on, why don't Ugandans know it & how on eatth will the demon be got rid of?

Change of leader is brought about by "the people" who want to be served, while opposition leader MUST have alternative socioeconomic programme to attract the people!

Yet, Ugandans are waiting for a man who has failed them in 33 years to finally serve them, while there is no oppopsitionleader with alternative programmes!

Musevnei is already campaigning, just as D. Trump who has improved USA economy, making Americans first on his programme, is doing!

D. Trump even sent food/first aid to Venezuelans & it's up the the 2 who call themselves their people's leaders, to ensure trucks enter the country!

Why do Ugandans maintain the tribalistic system without which Museveni has no place in the country?

Why is there no common opposition leadership?

It all comes to 'leadership' ability/quality, but as things are, without tribal leaders standing down to give chance to Ugandans to look at themselves as 1 people fighting a common enemy, there will never be a common opposition leader as Museveni can only be got rid of in UNITY

This is fight for Independence, without tribal leaders being on the side of FREEDOM of the country formed by tribal lands & say NO to the tribalistic system of rule, there will never be that 1 opposition leader & there is no way Museveni will leave!

The campaign for next fake election is on & Ugandans have no common leadership & Musevnei has no opposition!

Why let Museveni use us against one another while he rules till he drops dead, then what?
Report to administrator
-4 #16 Wainainchi 2019-02-09 02:47
I am not surprised to read lunatic and hostile comments of Akot and other thugs.

They never do any good for Uganda just write nonsense and spread harmful propaganda and hate.

Fortunately they are only very negligible part of our community who use Observer to voice their frustration ,hate and lies.

Old English saying goes( I repeat again for the sake of new readers) ..." IF WISHES WERE HORSES THE BEGGERS WOULD RIDE".

Uganda society is healthy and progressive,good and law abiding.

Yganda society has all democratic institutions in place and the Head of State takes necessary steps from time to time to steer Uganda ship to the right direction through murky international waters ignoring ludicrous and poisons comments of thugs like Lakwena,Akot,Kabakka Yekka who are doing nothing but sitting in some dark corners if the world writing from day to day their fullish and malicious comments trying to confuse bystanders and people who do not understand Uganda and Uganda.!!

couple of months ago, on a campaign trail for a bi election , this very dictator said he wouldn't mind having a SLEEPY NRM party member as long as he/she is willing to rubber stamp any resolution passed without questions asked.
What happened with that line of thinking?

What happen , it's red big flag that the creature is suffering from Alzheimers unable to tell left from right.
Report to administrator
12