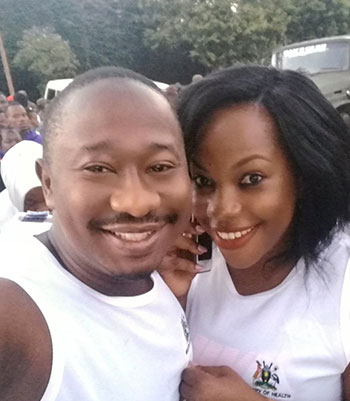 Three journalists attached to the British Broadcasting Cooperation (BBC) and Vivian Nakaliika, the wife of NBS TV news anchor, Solomon Serwanjja are in police custody. The journalists are Godfrey Badyebe, Kasim Mohamad and Rashid Kaweesa together with their driver Shafiq.

Security operatives say they are still searching for Serwanjja. Robert Ssempala, the chairman of the Human Rights Network for Journalists (HRNJ) broke the news of the arrest of the journalists.

"Last night security operatives surrounded the home of Solomon Serwanjja, a journalist with NBS TV. However he was not in the house and has since arrested his wife Vivian Nakaliika Serwanjja," Ssempala said.

Adding that, "It has also arrested two other journalists working with BBC. They are being detained at the CPS in Kampala. The police commander for Kampala Metropolitan Area, Moses Kafeero has told HRNJ-UGANDA that it's a long story."

Information obtained by URN shows that the three journalists were picked up from different areas in Kampala last night by operatives from the Internal Security Organisation (ISO).

According to security sources, the four are accused of working with wrong elements from foreign entities. They are said to have bought drugs worth Shs 5 million from government health facilities and were scheduled to buy even more from Kiruddu hospital later. The journalists were reportedly working on a story about theft of government drugs that are later sold to South Sudan and Democratic Republic of Congo. Unconfirmed reports indicate that the investigation was sanctioned by State House Health Monitoring Unit.

Kampala Metropolitan Police spokesperson Patrick Onyango said the suspects were arrested after a tipoff that they were in possession of government drugs. He said 14 boxes of Lumefantine tablets, vaccines for Hepatitis B and other drugs labelled with government seals were found in Serwanjja's home in Mukono.

Nakaliika is the communication officer in charge of health promotion and behavioural change in ministry of Health. Onyango said they waited for Serwanjja to come home in vain and that if the journalists had informed police about their investigations earlier, police would have offered them protection instead.

Onyango maintained that Serwanjja is still a wanted suspect because, traditionally, a home belongs to the husband and so it's Serwanjja explain to police how the drugs ended up at his home. The four suspects are held in the office of Joshua Tusingwire, the officer-in-charge of Criminal Investigations Central Police station (CPS) Kampala together with their lawyer, Medard Sseggona.

Really even before hearing from the arrested and wanted journalists one wonders why CMI has to be the one to arrrest 5 journalists and how all 5 renown journalists can be interested in only 5 million worth of drugs and why only journalists.

Are these drugs the new tools needed in journalism!

Onyango is also as spoilt as the big lipped Kayima and OMO's police is a continuation of KK's rot.
Report to administrator
+5 #2 rubangakene 2019-02-07 19:05
Do not yet draw conclusions prematurely; journalists at times pose as "criminals" in order to unearth the illegal sale of drugs and other activities.

The fact that they were in possession of the said drugs might be that they were trying to establish the trail leading to the "Big Shots" behind these practices!
Report to administrator
0 #3 Saul 2019-02-08 08:29
Three theories that am still looking for answers;

1. If its true it was investigative journalism then they should tell us these fools who are behind stealing drugs in our hospitals.

2. Could it be that actually no theft happens for drugs but deliberate efforts to frustrate govt plans by such well connected people

3. Could it be that actually its them trading in the stolen drugs esp when the wife is working and have accessing to such and when things backfire bring in work related.
Report to administrator
0 #4 Kegi 2019-02-08 20:24
As a matter of fact the investigators ended up being investigated.

All we want to know what were findings. And what is ISO preventing the journalists from telling the public. For all we know they are innocent.
Report to administrator
0 #5 naguyo 2019-02-08 22:16
saul - i will agree with you. I think there might be much more behind this whole saga.

Wife works with Ministry of Health and with a position of authority.

So she might even be the one ferrying out the drugs and husband then gets to have a story to work on. Cant trust this Vivian.
Report to administrator