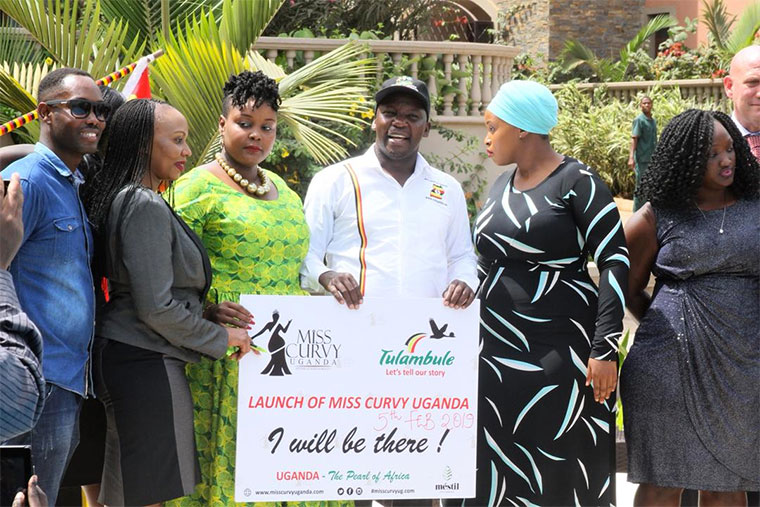 State minister for Tourism Godfrey Kiwanda has defended the controversial Miss Curvy Uganda beauty pageant which he said is aimed at celebrating Uganda’s most curvaceous women.

Since the launch of the pageant at Mestil Hotel on Tuesday, Kiwanda has come under extreme criticism from Ugandan women activists and feminists, who say the pageant is only aimed at objectifying women and will turn Uganda into a sex tourism destination.

“Together with my colleagues of Uganda Women Parliamentary Association, we condemn acts of objectifying and dehumanising women. The minister should have known that women are more than just bodies, and so we should be treated with honour and respect,” said former Leader of Opposition Winnie Kiiza.

But in a statement, Kiwanda says the concept of Miss Curvy Uganda is no different from other beauty pageants that only celebrate slender and slim women. The minister wonders why the same Ugandans, who almost unanimously celebrated the recent achievements of Miss World Africa Quiin Abenakyo, are now against the Miss Curvy Uganda pageant which also rides on the same concept - but this time on more endowed women.

Kiwanda says those criticising the pageant as a form of discrimination against women, “several times we have attended body builder competitions among men in Uganda and world over."

Kiwanda also said the issue of using Ugandan curvaceous women as a tourism product has been misinterpreted, because "tourism starts with people and that Uganda is beyond just animals and its people are the biggest tourism product. That's why we have been voted several times as happiest people in the world and most hospitable.”

He also said in any case, the event is organised by women themselves so it is not a case of men objectifying women.

“The M.D for Miss Curvey Uganda is Mrs. Annie Mungoma”

First, this was not the Minister's idea, he was simply called in to support an idea of a one Ann Mungoma.

Two, it's a all a storm in a teacup, the media has blown this up, to the extent of sucking in the Church and even the President. Being in a largely conservative society, any talk about things like curves and bums is almost a taboo. This will all be over soon.

And finally, all beauty contests are essentially about objectifying women. They are paraded in all kinds of outfits and the one most appealing to a panel of judges is labelled the most beautiful in place X,Y,Z. This is not any different.

Thanks for the “elderly” advise. Yes I watch the “adult movies”. The contents are well labeled, confined to specific digital versatile discs or digital video discs (DVD) or if shown on telly, it is a specific time, specific programme and caution or parental advice given.

So are we going to have these curvy daughters of eve in Uganda confined to a particular location, displayed (God forbid) at a specific time, and viewing will be allowed to specific people? Remember the rest of the tourist attractions are “things” .

What happens if I am crossing Lumumba Avenue with my 7 year old son and one suddenly appears in front of us? Just my innocent and wild thoughts.
Report to administrator
0 #23 Wooden K. 2019-02-08 19:35
Unkulamusa mu linnya lya Nabbi !

You have really amused me today .

After aquating the display of women (with the aim of attracting tourists) and beauty contests , you follow that up by apealing to contextualization of issues !

Let me fist say that it is really frustrating that our dear OBSERVER has chosen to slow down the pace of discussions on their pages; we would otherwise teach and learn from each other a lot.

I must also point out that Luzinda`s nudity , or the causes of lesbianism are not actions that are sponsored and sanctioned by any elected authority.

Kiwanda happens to be a Minister , He is on record for having explained the purpose and the aims of this sick activity.
Report to administrator
0 #24 Wooden K. 2019-02-08 20:20
Budapest , may I ask what facts you have ?
Isn`t true that the Minister of Tourism supported the IDEA ?

Isn`t true that if you support and promote an( wrong) idea, you become one its subscribers Or an accomplice in case of a crime ?

Are you not aware that these curved women have been holding their own competations and show and no one compalined until this too ambitious Kiwanda jumped in and distorted their thing ?

Don`t you know the difference between "marketing" a person ( as an item of exchange) and participatingin a contest as a social and recreational envent ?
Report to administrator
0 #25 Rajab Kakyama 2019-02-08 21:19
I do not know what you intended when stating that the observer is "slowing discussions."

But I will stick to courtesy and my ethical code not to trade in insults. Maybe we can draw our personal differences on a more intellectual discourse.

And what is it you mean when you state "Luzinda it was her personal thing?" To you it is a matter of numbers.

In other words it is OK for one person to kill but bad if a group of people killed. In my book it is the same crime. So, I make my plea once again, "let's contextualize these issues."
Report to administrator
0 #26 Wooden K. 2019-02-09 13:01
Asslim Aleikuh Haji Rajab !

You are wrong ; i do not angage in trading insults.
You are probably confusing my divergent way of presentation with insults.

Yes, OBSERVER slows down things , Sometimes it takes the whole day before a comment is published. By the time it arrives , other things have taken over.

No , Kiwanda did not do what you describe., He , instead ,displayed those women as a "TOURIST ATTRACTION" . The women were (contextually) not presented as partispants of a fashion show ; they were displayed as "exortic" items of exchange or as baits to attract and catch the eyes of curious adventurers.

He said that tourist should come to Uganda and see "curvey women" who cannot be found anywhere else but in Uganda. This is both incorrect and objectionable !

if you see a Munyankore woman , with those curves... they have a story.,, they have a story behind that. In our dances when we spread our hands , the way we spread them..there is a story behind that . When we see a Muganda woman ,, the way she consentrates on the waist ..eh !...the way she does ..there is a story about that ... and THAT IS THE STORY WE SELL"
Report to administrator
123