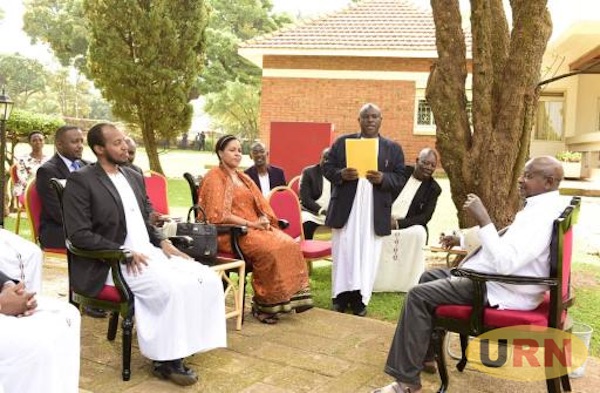 Oyo was accompanied by the Queen Mother Best Kemigisa and members of the Tooro kingdom negotiating team led by the kingdom prime minister Bernard Tungwako.

Tungwako says that visit was meant to remind the president about his pledge that he made in 2013 that the government would return the kingdom's assets.

The assets including land, county and sub-county headquarters among others which were forcefully taken from kingdoms by the central government in 1966 when the then President Milton Obote abolished traditional institutions and made Uganda a republic.

The assets are located in Kabarole, Kamwenge, Kyenjojo and Kyegegwa districts. The kingdom also has assets in Kasese and Bundibugyo, which were formerly under Tooro Kingdom.

According to Tungwako, Oyo told the president that the delay by the government to return the properties has affected the kingdom financially. He said that if the assets are returned, the kingdom can rent them out and get income to sustain its activities and improve its financial base.

King Oyo also reportedly told Museveni that the kingdom and the government negotiating team are yet to agree whether the kingdom should be given royalties from Kilembe mines, Queen Elizabeth national park and Katwe salt lake in Kasese district, which are now under the Rwenzururu kingdom.

According to Tungwako, another meeting with the president has been scheduled in two months time. In 2014, youth from the kingdom walked more than 300 kilometres to Kampala protesting against the delay by the government to return the kingdom's assets.

The youths under their umbrella group, Amacumu ne Bitara later delivered the petition to the speaker of parliament, Rebecca Kadaga.

Kadaga pledged to work with members of parliament from Tooro to present a motion that will create a resolution for government and Tooro officials to start negotiations.

Is he in the know of the asset inventory? Is he aware that the government he purports to be leading is holding onto those assets illegally?

So if the answers to these questions are “yes” and M7 has allowed his government to illegally derive benefits from these properties without compensation or reward, and it requires long protracted negotiations (I wonder why negotiate) to have them returned or vacated, how better is Museveni’s government from past regimes of Obote and Amin????
Report to administrator
0 #2 Akot 2019-02-01 20:55
Lucky chief Museveni! He has no tribal land in Uganda, but owns the country & tribes have to beg him to return their kingdom assets.

What will Ugandans do without Museveni as no tribe has ownership over what belong to their kingdoms, but migrant Museveni does & decides?

Why don't Ugandans see they are slaves of migrant Museveni who has no tribal land in the zone, yet owns everything & no one has a say?

Why are Ugandans slaves, beggers on land that should belong to them, reason they gave shelter to Museveni?

But then again, Acholi situation is worst as they are the outsiders, yet Museveni wants to use them today to ensure his continuity, while being Acholi tribal leader, besides being Ugandan chief tribal leader!
Report to administrator
+1 #3 rubangakene 2019-02-01 21:13
Kilembe Mines, The Queen Elisabeth National Park and Katwe Salts are designated national assets that has nothing to do with the Tooro Kingdom.

They belong to Uganda tax payers; if these people think they can just sit on their backside and scrounge every bit of money from the hard working Ugandans, they should forget it, full stop.

What is it with these pretenders, eh, claiming things which are meant to be shared by everyone? HAPA NI KAZI TUU, HAKUNA YA KUBABAISHA BUURE!!
Report to administrator
0 #4 Akot 2019-02-02 19:11
ubangakene, Well stated, but,

Museveni who has no tribal land in the zone is the chief tribal leader & tribes have to go with what he decides - Museveni is the owner of Uganda & rules as he wishes!

What will Ugandans do if he decides to Reform the Republic & be just dictator, or if he dissolves tribal status he put in place, knowing it was/still is the only means Ugandans stay divided & he justs goes on?

Without UNITY against Museveni, he is going no where & has to finalise conquest!

We can go on for +30 years complaining, but unless we UNITE & come out to block this demon, he will end up owning all tribal lands, even those without tribal leaders!

Are tribal leaders waiting for Musevnei to dissolve the tribalistic system & make the zone a "country" again, & what will they do then?
Report to administrator
0 #5 Akot 2019-02-02 19:38
rubangakene, rightly stated.

Kilembe Mines, The Queen Elisabeth National Park and Katwe Salts, Amuru, oil fields...belonged to Ugandans, but not any more as tribalistically ruled & controlled by Museveni, he is the owner of everything in the country!

But, Ugandans MUST make their stand as to whom their land belongs to, how they want to be governed, by who, for how long.

33 years & Museveni has made it clear it's him & no other to rule, yet Ugandans have not understood it!

As Ugandans won't UNITE to throw Museveni out, Independent Tribal States is the only solution to give chance to tribes control, manage their land riches!
Report to administrator
0 #6 kabayekka 2019-02-03 18:40
All this is a waste of time for this young man. The best this African King can do is to join up with the opposition in the hope that a Uganda Transitional government can be formed to sort out the mess the country is in.

This current leader is unable to sort out any of the historical misrule that has befallen this great country of Uganda.
Report to administrator