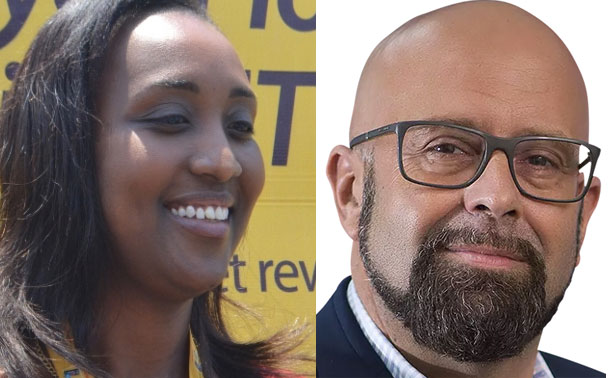 Telecommunications giant, MTN Uganda has confirmed the deportation of their two staff by Ugandan security authorities.

In a statement issued today Tuesday, MTN confirmed the deportation of Olivier Prentout, the telecommunications chief marketing officer and Annie Bilenge Tabura, the head of sales and distribution to France and Rwanda respectively.

According to the statement, Prentout was arrested by police from Entebbe airport on Saturday January 19 shortly after arrival from a business trip abroad while Tabura was picked up unidentified security personnel upon arrival at the MTN headquarters in Kololo on Monday.

An earlier statement signed by the deputy police spokesperson, Polly Namaye, says the duo was involved in activities that comprise national security and that they were using the telecom to achieve their ill motives. She explained that security agencies have been monitoring the activities of the duo in close coordination with immigration officials.

"We strongly believe that the deportation of the two foreigners, who were using their employment tools to achieve their ill motives, has enabled us disrupt their intended plans of compromising our national security," Namaye said in her statement.

Police spokesperson, Fred Enanga declined to divulge details of their investigations when contacted for further explanation. "And you think you will get those details? I don't think so. But get in touch with Polly [Namaye], I gave her that assignment," he said.

In July last year, the Internal Security Organisation (ISO) raided the South African telecoms firm, disconnecting four of its servers. MTN then reported the case as an “illegal intrusion.” MTN said the intruders had accessed the server room after the kidnap of one of their contractors, a Huawei Technologies employee who was forced to grant access.

Renewal of the licence for one of the country's biggest taxpayers had seemed like it would be a routine process after the regulator, Uganda Communications Commission (UCC) assured the nation that MTN’s licence would be renewed for the next 10 years.

But according to the East African, Museveni recently raised concern over the $100m licence fee that was later reduced to $58m by UCC. Rwanda and Uganda are having a hushed intelligence war against each. Over the years, there have been repeated reports of both countries, arresting, detaining, deporting and sometimes killing each other's nationals overs suspected espionage.

On Saturday while addressing a crowd at the opening of the Uganda Revenue Authority new building, President Museveni said he had learnt that telecom companies were under declaring the number of calls to pay less tax. He said they had found that telecoms were under declaring calls made by over two million. This meant that even in taxes to government, they paid less money than they were supposed to pay.

“They will have to pay back taxes [which they evaded when they under declared],” Museveni said.

UCC received an application for a 10-year renewal of MTN's licence in October 2017. It thereafter kick-started the process of evaluating MTN's application. A public hearing was conducted in April 2018. The company earned a bill of good performance during evaluation process, however, with a few concerns.

UCC in a 2018 evaluation report noted; "MTN has largely provided uninterrupted communication services during the course of its licence in accordance with the laws of Republic of Uganda."

The regulator further stated; "whereas MTN has to a large extent complied with most of its licence and regulatory obligation, there are a number of outstanding areas of non-compliance which must be addressed."

Second level complaints are grievances raised to the regulator after failing to get redress from the primary service provider.

Meanwhile, police has summoned MTN's general manager in charge of mobile financial services, Elsa Muzzolin to appear at Special Investigations Division (SID) in Kireka and answer to cases related to incitement of violence.

It is not immediately clear what did or how Muzzolin incited violence.

We are seeing the French connection for the first time and is not yet clear what the French interests in Uganda is.
Report to administrator
+1 #2 Lakwena 2019-01-23 08:12
A close look at Annie Bilenge Tabura hereabove; demonstrates, how the coolness of a villain makes him/her not only far more dangerous, but also more directly abominable in our eyes than he/she would have seemed without it (Emmanuel Kant).

In other words, what did Ugandans receive in return for hosting, feeding, nursing, educating and employing the generations of Banyarwanda who fled their country in 1959? Death thru the bullets in Luweero (1981-1986), Northern Uganda 1986-2005) and twice in Kisangani (1999 and 2000).
Report to administrator
0 #3 Lakwena 2019-01-23 08:20
In Acholi we say "Kica oneko Yesu" (compassion got Jesus lynched). Or layomcwing ki gero ki nyac, meaning the the sexually generous woman gets diddled with STD.

In other words, because of our naive generosity or open door policy on refugees from neighboring countries, we are now socially, economically and politically f...k up!
Report to administrator
0 #4 Wanainchi 2019-01-23 08:22
Why to deport spies.Hang them or put in Luzira with other scumbags.

My suggestion for Acot and others. Only! But....hehehehehehehehe....
Report to administrator
0 #5 Concerned Ugandan 2019-01-23 10:23
Interesting! But let us also not be diverted from very real issues closer to home like the quest for real democracy and not that defined by NRM.

Such stories tend to make me think about how the Americans made up excuses to invade Iraq purportedly on grounds of fighting terrorists and yet the real reason was economic.

My question here is what is this deportation meant to divert us from? What is it in the pipeline that we are being distracted from?
Report to administrator
0 #6 gwok 2019-01-23 14:07
Quoting Lakwena:

..... In other words, what did Ugandans receive in return for hosting, feeding, nursing, educating and employing the generations of Banyarwanda who fled their country in 1959? ...

Please take it easy on the HOSTING REFUGEES because Uganda should & must remain hospitable to refugees.

Just look back at our history & ask the same question: what did those other countries get back for hosting Ugandans fleeing from Idi Amin's regime in the 1970s?

Further, we do not know what the future holds for the indigenous Ugandans, especially since we also do not know in what "situation" Uganda will be left in after the inevitable & eventual departure of M7. {I am a Jolango/Kalenjin and I will assume that you speak / understand a Lwo dialect. I say to you in Akena's Father's Lwo dialect: Awano kede Ngwec amaro abedo iye ba. Ngwec ton kwene, apenyi do?}.
Report to administrator
+1 #7 Lakwena 2019-01-24 08:10
Quoting gwok:

..... In other words, what did Ugandans receive in return for hosting, feeding, nursing, educating and employing the generations of Banyarwanda who fled their country in 1959? ...

Please take it easy on the HOSTING REFUGEES because Uganda should & must remain hospitable to refugees.

Just look back at our history & ask the same question: what did those other countries get back for hosting Ugandans fleeing from Idi Amin's regime in the 1970s? ...

But Gwok, the Ugandans who took refuge in wherever countries, did not pick guns and killed the citizens of the host countries. Nor did they look down, spat at, urinated and/or puupu into the cooking and marwa pots.

In other words Gwok, when the Acholi men lost their balls, those were some of the provocation, which pissed Alice Auma Lakwena, to pick whatever: sticks, stones, etc. to face off the refugees, turned liberators.
Report to administrator
+1 #8 Lakwena 2019-01-24 08:24
And Gwok, before the Nov 2016 Kasese Massacre,

before he was gunned down in a hail of bullets; did you watch the TV clip in Kasese, when a man was so enraged and pissed at the police and UPDF, such that he grasped at anything: straws, sand, stones and sticks to face off the soldiers armed with Sub-machine-guns?

In other words, it is sometime better to die fighting for your freedom, than being urinated on by a foreigner, and thanking him for the warm shower.
Report to administrator