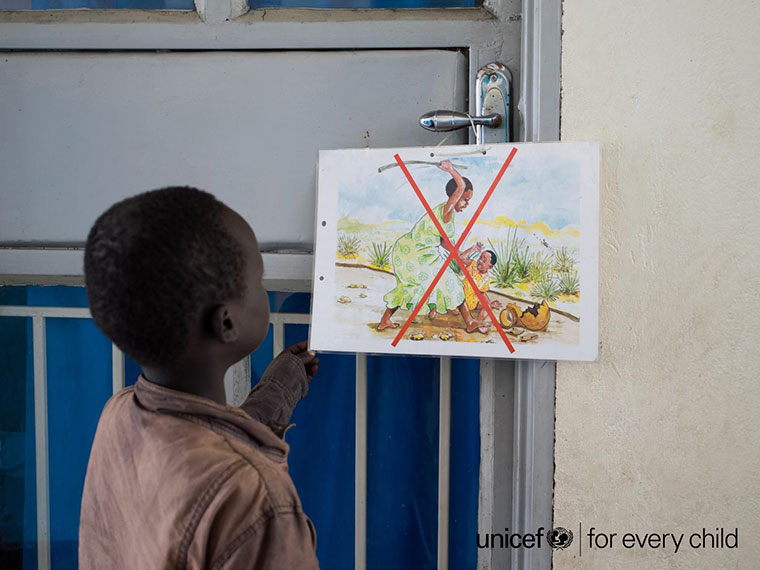 A child looking at a poster against corporal punishment

A crime preventer in Mayuge district is on the run after allegedly caning his teenage daughter to death.

54-year-old Ahmed Wesonga, a resident of Busamu village in Malongo sub-county is wanted in connection with the death of his 14-year-old daughter Winnie Nabwire, a former pupil at Golden junior school in Mayuge town council.

It is alleged that Wesonga and his friend, Steven Wanambuka tied the deceased's hands and caned her in turns. Junique Namuganza, the deceased’s mother said Nabwire was caned by her father for spending a night in a nightclub during the New Year’s celebrations. According to Namuganza, Wabwire's two brothers also joined their father in beating her up allover the body.

On learning about his daughter's demise, Wesonga fled into hiding, while Wanambuka was picked up and is in custody at Mayuge central police station.

Busamu village defense secretary Fred Kiyube says that the deceased came to visit his father a week ago. Hassan Kilengeti, the officer-in-charge of the Criminal Investigations Department at Mayuge central police station says they have launched a manhunt for the prime suspect.

"We doing our very best to arrest the prime suspect and our team has mounted search for him in all the neighboring forest reserves," he said adding that the police is already recording statements from eyewitnesses.

This has been observed well through the world media when the Uganda military, a people's army, with sticks beat up demostrators and journalists until they started to bleed.

This country is training citizens whether they are religious or not to be violent and to actively take the law in their own hands. This is happening to the leaders of the communities at random.
Report to administrator